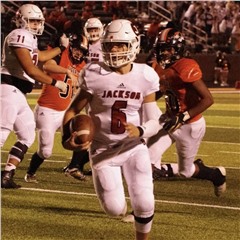 For the fifth year in a row, the Jackson football team was victorious in its annual crosstown rivalry matchup against SEMO Conference opponent Cape Central. This time the Indians bested the Tigers by shutting them out for the second year in a row by a score of 63-0 last Friday night at Tiger Stadium.

Jackson (4-0, 2-0 SEMO) was able to take a commanding 50-0 lead by the end of the first half as the Indians defense barely allowed Cape’s offense to get past the 50-yard line. The Tigers (1-2, 0-1) only managed to produce 55 yards of total offense as the Indians recorded 19 tackles for a loss, seven sacks, four fumble recoveries and two interceptions.

“I’m really pleased with our defense. We’ve talked about forcing turnovers all week and being plus,” Jackson head coach Brent Eckley said. “We thought that if we played really well, we’d be plus three. Here we are coming out of the first quarter and we’re plus five plus a blocked punt for a safety.”

Leading the way for Jackson’s defense was none other than Class 5 All-State senior inside linebacker Bryce Norman, who produced a game-high 12 tackles and four tackles for a loss. Norman was also one of the five Indians to sack Cape’s first-year quarterback sophomore Morgan Diamond.

With the win, Jackson picked up its first shutout of the season while Norman and the rest of the 2021 class finished their careers without losing to Cape.

“[Getting the shutout] feels amazing. In the first game, the starters gave up two touchdowns, but other than that we’ve held out everybody in the first half,” Norman said. “It feels pretty good to get a goose egg on the board. Hopefully the next senior class [can beat Cape]. Just keep continuing [the streak] because there’s nothing better than beating a rival.”

Diamond finished with negative 70 rushing yards on 13 carries while going seven-of-11 through the air with 104 yards and two picks. Cape’s leading rusher was junior running back Tyray Jackson with 17 yards on six attempts.

Other Indians to bring Diamond down for a sack were players like senior outside linebacker Garner Horman and senior defensive end Cole Parker, who each recorded two in the contest. Senior inside linebacker Randol McDowell and senior nose tackle Zane Lawrence-Collier also had a sack.

“We planned on blitzing all week. Through scout-team practice, we thought we’d bring good pressure on them,” Norman said. “We stunted a lot and gave them a few more looks than they’ve seen this year and got to the quarterback.”

Coming up with interceptions for Jackson’s defense were junior cornerback Blake Blackman, who made a one-handed grab for his turnover, and junior safety Flint Guilliams. On top of his interception, Guilliams forced one fumble, made one tackle for a loss and had four stops in all.

The Indians had another productive night from sophomore defensive end Tony Terry as he recovered two fumbles and blocked a punt for a safety. Terry almost recovered his own blocked punt for a touchdown like he did back in Week 2.

Jackson’s offense was able to turn all five other turnovers  the defense forced into points as the unit scored six touchdowns on the ground and two in the passing game. Overall, the Indians recorded 329 yards of offense on 46 plays.

“Offensively, I thought we executed pretty well,” Eckley said. “I thought we were physical to start with. There are some things we want to work on, but then you see how they align, so you just do what you’ve been doing. We had some plays we repeated a few times — didn’t run a whole lot of offense and didn’t have a lot of snaps with short-field situations.”

Three Indians ran for 42 yards or more as senior running back Daniel Dickerson finished with a game-high 62 on eight carries while also scoring a touchdown. Sophomore running back Tony Williams finished second in rushing behind Dickerson with 48 yards off 13 attempts, but he did score a career-high two touchdowns.

The third-leading rusher for Jackson was senior quarterback Cael Welker as he averaged 10.5 yards per carry by coming up with 42 on just four rushes. Welker scored two touchdowns running the ball while completing six of his eight passing attempts for 91 yards, two touchdowns and no interceptions.

Being on the receiving end of Welker’s touchdown passes were the usual suspects in junior wide receiver Kannen Turley and sophomore wide receiver Marquis Eckley. Along with the two scores, Eckley and Turley combined for five catches and 86 yards receiving.

This was the second game in a row where Jackson’s offensive line kept Welker from being sacked as the signal caller has also not thrown an interception through the first four games.

The sixth and final rushing touchdown for the Indians came from Jackson’s third-string running back and starting cornerback senior Dimechi Herring, who broke off a 3-yard run for the score in the second quarter to make it 44-0. On Saturday, Herring received his first official offer to play college football from Missouri Baptist.

Jackson will now travel south to face another SEMO Conference opponent in Sikeston (2-2, 0-2), which is coming off a 30-9 loss to Poplar Bluff. The Indians defeated the Mules 56-7 last week at home.