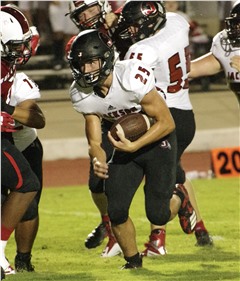 In a game where the Jackson football team trailed for the first time this season after an 80-yard touchdown by SEMO conference opponent Sikeston on the second play of the game, the Indians came away with a 56-14 win Friday, Sept. 14 on the road.

Jackson (4-0, 2-0 SEMO) was able to accomplish this feat by scoring 49-unanswered points with a game-high four touchdowns from sophomore running back Daniel Dickerson, his second four score game this season.

“We don’t have as many guys that are playing both ways, and not that conditioning is necessarily the factor, but that they have guys playing both ways and are playing double the snaps,” Jackson Head Coach Brent Eckley said. “It’s tougher to play defense than it is offense because you have to react and run to the ball. Having to play a lot of snaps on defense — it’s tough.”

The scoring run was sparked by a 75-yard touchdown return by senior wide receiver Jordan Kent after the Bulldogs (2-2, 1-1) led the Indians 14-7 with under five minutes remaining in the first quarter.

Kent hauled in Jackson’s first score of the game after sophomore quarterback Cael Welker rolled right and found the senior near the sideline. Kent caught the ball and stretched his arm over the pylon to tie the game at 7-7.

This was after the Indians allowed the 80-yard touchdown run by junior quarterback Gage Rolwing, who tricked the defense on an option play for the score.

“The first quarter we kind of started off slow — I’d say that we came in thinking that we would win the game,” Jackson junior defensive end Cole Amelunke said. “As soon as they realized that we came to play, too, everything slowed back down.”

Coach Eckley was actually happy his team was down for the first time this season because it gave Jackson adversity to start the game.

“We talked to them about that this week, and I talked to them about that at 4 o’clock this afternoon, ‘Hey, we’re on the road and they might score early,’” Eckley said. “It took them a little while to respond, but offensively we responded and special teams were able to even things up. Our defense once they got into a groove, they played really well down the stretch.”

It only took six plays on Sikeston’s second drive to take a 14-7 lead over the Indians as senior wide receiver Tra Ranson scored on an 18-yard run on fourth down.

Amelunke later faced some adversity of his own after he was called for a personal foul after tackling Rolwing out of bounds on Sikeston’s third drive.

“My coaches said, ‘Hey, just put it behind you. Go back out there and do what you do best,’” Amelunke said.

Amelunke and the rest of the defense did so as they held the Bulldogs to a missed field goal on the same drive, and Sikeston did not reach the endzone for the remainder of the game.

The Indians defense was able to contain Sikeston’s rushing attack by meeting ball carriers in the backfield for a total of 16 tackles for a loss.

Amelunke registered three of these tackles in the backfield for a total of seven stops while also recording one of Jackson’s five sacks.

The Indians have now outscored opponents 182-28 through week four as the Bulldogs 14 points was the most this defense has allowed all season.

“Coming into this season, I didn’t think that this group of guys — the defense — would come together like we have,” Amelunke said. “I’m very proud of them. Bryce Norman, Riley Pike, Randol McDowell are always in there every time playing their hearts out. Tristin Koenig as well.”

Dickerson and Welker split rushing duties as the running back carried the ball 12 times for 73 yards as Welker had a team-high 13 attempts for 77 yards and one touchdown.

Three of Dickerson’s four touchdowns came in the second quarter with each being longer runs than the other.

Dickerson took a dump pass to Sikeston’s 1-yard line and scored two plays later by barreling through defenders at the goal line.

Dickerson’s next touchdown run was a 14-yard gain as the sophomore broke off a 23-yard run for his final score of the first half to give Jackson a 35-14 lead heading into the locker room.

“I just felt like I had a lot of space off to my left, so I cut it back that way and just started running,” Dickerson said. “[I was just] running hard, giving all my effort and had my line help me out.”

Welker scored his rushing touchdown to open the second half on a 10-play, 56-yard drive as he dived into the endzone between two defenders for a 3-yard play, giving the Indians a 42-14 lead.

Dickerson scored his final touchdown of the game on a 5-yard run to make it 49-14 with a little over two minutes left in the third.

The final score of the night came when backup quarterback junior Jake Smith dumped the ball off to junior Seth Waters for a 67-yard touchdown with 10:05 left in regulation.