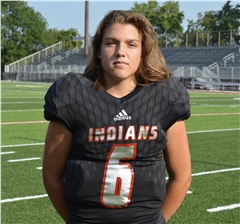 One week before facing Webster Groves on the road, the Jackson football team traveled north on I-55 Friday to play in a jamboree hosted by Seckman.

The Jaguars were recently moved to Class 5 District 1 with Jackson, but the teams did not face each other that night.

The Indians still faced a district opponent, Oakville, in their first scrimmage.

Jackson’s offense took the field first against the Tigers, which experimented with a jumbo package offense as senior wide receiver Jordan Kent took the direct snap.

Kent was able to pickup two first downs in the formation as he hurdled over a defender on third-and-6 to move the chains for the last time.

Head coach Brent Eckley said his team ran these plays in the first scrimmage at last year’s jamboree in Festus, but he wasn’t sure if they ever ran the scheme during the season again.

After Kent ran for no gain on first down, the entire first-team offense took the field as sophomore quarterback Cael Welker led the huddle.

Welker’s first two passes fell incomplete after an overthrow intended for junior wide receiver Dalton Skrob and the final going out of bounds.

In the next play, Welker dumped the ball off to junior running back Seth Waters, who was able to take the ball for a first down.

Kent got the ball in his hands the very next play as he broke off for a near 20-yard run, which then allowed Welker to break off for 20 yards of his own for a touchdown.

Junior Jake Smith took over for Welker following the score, who hit sophomore wide receiver Ty Moran for a 33-yard play on a screen pass.

Smith scored two plays later as he ran for a 2-yard touchdown.

“There wasn’t a whole lot of rhythm, and the other thing is we’re usually limited to what we call play wise in a jamboree because we’re not showing everything we can do,” Coach Eckley said. “Hopefully there’s some more stuff we’ll be able to execute next week.”

Jackson was also without one of its starting offensive lineman in senior guard Kevin Crites, who had his wisdom teeth removed last week to be able to play in the season opener.

Oakville’s offense did not manage to have the same success since the Indians defense held them to only one first down in the next set of plays.

Jackson allowed Oak-ville’s lone first down on fourth down during one of the last plays of the scrimmage.

“I thought our triggers were good defensive line wise — we got our hands on the offensive line,” Eckley said. “I’m pleased with how fast our defense played.”

In the second and final scrimmage, Jackson faced Class 4 Festus as the Indians defense remained on the field to face the Tigers wing t offense.

Festus broke off a 40-yard touchdown run on the opening play, but Jackson was able to hold the Tigers scoreless for the final 17 plays.

The Indians also forced Festus to turn the ball over on downs as Amelunke came up with a tackle inside the 5-yard line at the line of scrimmage.

“We let [receivers] behind us a little bit, but [Jones] made a really athletic play going up and knocking the ball down,” Eckley said. “We’re going to continue to work on the discipline to stay on top on those plays.”

Jackson’s offense lined up in the jumbo package once more with sophomore running back Daniel Dickerson taking the snaps this time.

That package only lasted two plays as Welker and the remainder of the regular offense came back on the field.

Welker found Kent for a 10-plus yard play through the air, which eventually led to a short-yardage touchdown run by Dickerson.

Smith and several skilled position players rotated in the game following the touchdown drive as the junior found senior Matt Jaco for a 15-yard touchdown.

“I thought [both quarterbacks] did a nice job tonight,” Eckley said. “They both made good plays, and I don’t know if there were necessarily any poor plays by either one. I was pleased with how they did.”

Eckley said Welker does a nice job of escaping pressure and extending plays, but he said he will continue to teach Welker ball security.