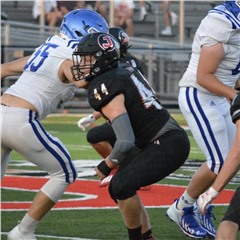 Even though the Jackson football team’s eyes are set on winning their first-ever Class 5 State Championship this fall, the Indians are now only one win away from three-peating as SEMO North Conference Champions.

Jackson (5-0, 3-0 SEMO) remained undefeated after facing conference opponent Sikeston (2-3, 0-3) this past Friday on the road, thanks to a 71-0 shutout of the Bulldogs. The Indians were able to reach the 70-point scoring mark for the first time since 2017 even without their two-time all-state senior quarterback Cael Welker.

This was because Welker was forced to serve a one-game suspension against Sikeston for violation of team rules. However, the Indians still totaled 422 yards of offense with a run-heavy approach (277 rushing yards on 29 attempts) as seven different players scored.

Even though Jackson had much success in the run game, head coach Brent Eckley still called on junior quarterback Cameron Marchi to throw 10 times. Marchi completed seven of those passes for 145 yards, two touchdowns and no interceptions while also scoring once on the ground.

This was Marchi’s first career start on the varsity level, but he has played plenty in the second half of games this season due to Jackson having marginal leads. Marchi has never been asked to throw this much, though.

“What I’m happy about is the fact that when he’s playing in here tonight, quite a bit of the offense is open to him,” Coach Eckley said. “He’s able to make it work and execute it rather than just handing the ball off, which a lot of times at the end of the game he’s doing that. He hasn’t had a chance to throw it a lot, so I was pleased with him taking care of it that way. He made some good throws.”

Turley also found paydirt on the ground as he broke off a 14-yard run on the jet sweep in the first quarter against the Bulldogs. Scoring the first touchdown of the night was senior running back Daniel Dickerson, who scored again at the end of the first and produced a game-high 158 rushing yards on 13 carries.

Jackson’s offense was without another one of its weapons in backup running back sophomore Tony Williams, who suffered a dislocated shoulder against Cape Central. Williams scored two touchdowns and gained 43 yards with 13 attempts against the Tigers last week.

In place of Williams was senior cornerback Dimechi Herring as he finished as the Indians third-leading rusher with 41 yards and one touchdown on four rushes. Fourth-string running back junior Joshua Wehrenberg paced Dickerson with 48 yards of his own and one score on his three carries.

“I thought our offensive line was physical and that includes Rhet Liley and Ty Moran,” Coach Eckley said. “Our receivers in general blocked their perimeter pretty well. Ball carriers ran hard, but it started up front. [Our offensive line] looked better to me this week as far as their speed, their pad level and their targets as far as who they’re supposed to be blocking, and how they were approaching angles.”

Scoring the seventh and final touchdown for Jackson’s offense was freshman running back Jason Goodman, who carried the ball three times for 29 yards and scored the final touchdown of the game in the fourth quarter.

Jackson’s eighth and final touchdown was scored via special teams as junior safety Flint Guilliams returned a punt 76 yards for the score in the third quarter. The Indians recorded 215 yards on punt returns as Guilliams finished with 139 on two returns, while junior cornerback Blake Blackman paced him with 39.

“The first thing you have to do to be a returner is you’ve got to be able to catch the ball, but really even more important than that is you’ve got to have courage because that ball is flying and so is the guy coming down to your face,” Coach Eckley said. “You have to be man enough that you’re going to catch that ball and risk getting hit when you’re not looking at him. You can’t dodge him — you have to secure the ball. They’ve been super unselfish because they’re willing to do that every game.”

The Indians defense only allowed Sikeston to accumulate 33 yards of total offense as five players finished with negative yardage. Losing the most yards at minus 17 was senior running back Lontas McClinton, who carried the ball seven times.

“Defensively, I was really pleased. Our guys did a really nice job adjusting to some different formations that [Sikeston] hadn’t shown, so we had to communicate early on,” Coach Eckley said. “It was rough in a couple spots there — they were able to get a couple plays, but our defensive line did a great job with their gaps. Our linebackers played really well, and then our secondary did a good job staying on top.”

Jackson finished with 26 tackles for a loss as all-state senior inside linebackers Randol McDowell and Bryce Norman combined for 13 of them. McDowell led the way with eight stops in the backfield while also collecting 12 total tackles.

The Indians did force a turnover in this one, though, as Blackman was able to pick off Heckemeyer in the second quarter, which led to another touchdown for Jackson.

Jackson will now face off against former Class 5 District 1 opponent Fox (5-0), which has been moved up to Class 6 this season. The Indians defeated the Warriors in the C5D1 title game by a combined score of 91-43 the last two seasons.