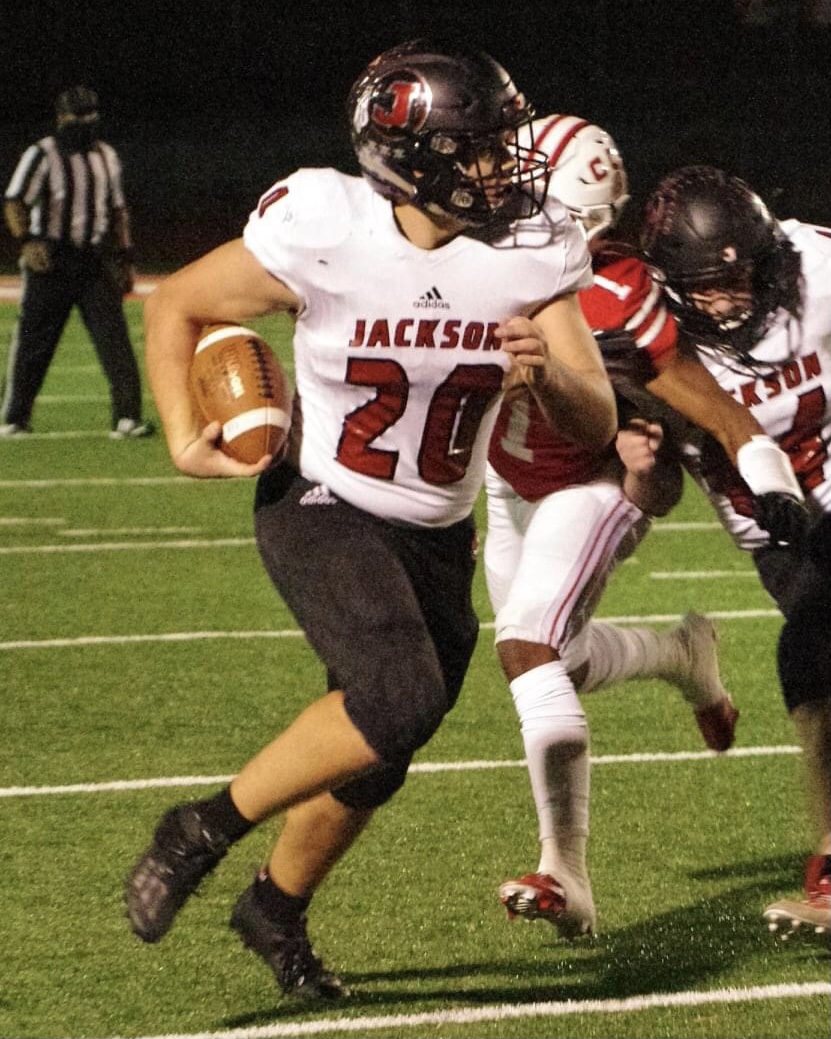 Every high school football game in American is 48 minutes, but Jackson only needed 24 to advance to its second-straight Class 5 Semifinal by defeating Chaminade in the quarterfinal round on Friday in St. Louis.

The Indians only needed one half to defeat the Red Devils since they were able to take a commanding 56-0 before both teams headed to the locker room.

Out of Chaminade’s eight offensive drives in the first half, it only converted one first down as the Indians defense forced six three-and-outs and made two interceptions. Coming up with those picks for Jackson was none other than senior inside linebacker Randol McDowell, who also racked up eight tackles.

Jackson recorded a total of four interceptions in the game as the third was made by senior outside linebacker Garner Horman. Not only did Horman pick off junior quarterback Cam Epps, but he returned the ball for a 16-yard touchdown.

Along with Horman’s pick-six, he also had one sack, one quarterback hurry and one tackle for a loss with four total stops. Leading the Indians in tackles was senior inside linebacker Bryce Norman with 10 as one of them was behind the line of scrimmage.

Also bringing pressure on Chaminade’s quarterback was junior outside linebacker Ryley Styer and sophomore defensive end Tony Terry as they each had two rushes apiece. Epps only managed to throw for 102 yards while going 7-for-14 and had three interceptions.

Epps was able to throw two touchdown passes, but he didn’t score those until the second half against Jackson’s second-string players. The last 24 minutes is also when senior running back Amar Johnson gained a majority of his game-high 136 rushing yards on 11 carries.

Offensively, the Indians were led by — you guessed it — senior quarterback Cael Welker as he scored five touchdowns for the second week in a row. Three of his touchdowns were through the air as he connected with junior wide receiver Kannen Turley twice and senior tight end Rhet Liley for his last.

Welker completed six of his 11 attempts for 157 yards and has yet to throw an interception through 12 games.

“[Welker] looked really good,” Jackson head coach Brent Eckley said. “They played a lot of man coverage, which sometimes your completion percentage will suffer because of that. The flip side is when you do complete it, you get a chance for some chunk plays.”

Two of Welker’s touchdown throws were more than 30 yards as Turley’s longest score was 31 while Liley gained the most yardage with a 33-yard catch. Turley finished with a game-high 104 yards on four grabs.

Welker accounted for two of Jackson’s five rushing touchdowns as he also picked up 53 yards on eight carries. Most of his attempts came off option runs where Welker made the decision to keep it himself rather than pitch it to the running back.

Jackson’s offensive line was still without one of its all-state tackles in junior Ashton Flinn, who is hoping to make a return this week. Making the move to right tackle for Flinn was junior Tanner Raines, who is usually at left guard. In at left guard for the past two games playing beside senior left tackle Connor Tollison has been sophomore Clay Doza.

Jackson (12-0) will now take on Ft. Zumwalt North (11-1) this Friday night in O’Fallon with a trip to the state championship game on the line. The Panthers lone loss was against Battle in Week 1, which they avenged last Friday night in the quarterfinals with a 35-14 win over the Spartans.