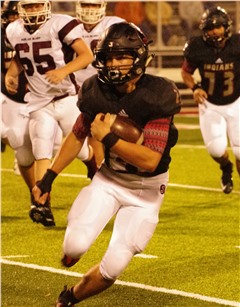 Another Friday night at The Pit, another shutout for the Jackson football team as the Indians defeated conference and district foe Poplar Bluff 49-0 in the Class 5 District 1 Semifinals in front of the home crowd on Nov. 2.

Jackson (10-0) scored five of its seven touchdowns over the Mules (5-6) in the first half, which was also where sophomore quarterback Cael Welker recorded all four of his touchdown passes.

The Indians were able to force Poplar Bluff’s offense into a quick three-and-out to start the game. This allowed Welker to find junior wide receiver Seth Waters for a 55-yard touchdown on a play-action pass on a five-play, 85 yard drive.

Three of Welker’s four touchdown throws came off play action as he was able to connect with senior wide receiver Jordan Kent for his next two, each being 50 or more yard plays.

“We know watching film that their linebackers bite down if we do play action with the running back,” Welker said. “We were able to get on top of the safeties because they thought it was going to be a run, too, so we just ran go [routes] right past them.”

After Kent recorded his first touchdown reception of the night, he didn’t return to action until the second quarter before going 58 yards for his final score of the night.

Jackson Head Coach Brent Eckley said Kent is currently dealing with an iliotibial band issue, which is a strong, thick band of fibrous tissue that runs along the outside of the leg. The pain is lingering from when he went down with an injury against Parkway Central on Oct. 19.

“His [IT band] just gets tight on him, so he was out for a little bit,” Coach Eckley said. “What I was pleased with is that we were able to move the ball without him and score a touchdown. He was able to get back in and [Poplar Bluff] gave us a look that we could take advantage of. He did a nice job getting on top and caught the ball and finished.”

Both of Welker’s touchdown throws to Kent were also one-play drives. Kent finished with 115 yards on only three catches while Waters also came down with 115 receiving yards on six catches.

The Indians third-leading receiver was sophomore Rhet Liley, who hauled in four passes for 65 yards and is continuing to be a reliable target for Welker.

“Rhet is in a good spot it seems like every time Cael scrambles,” Coach Eckley said. “He feels the defense really well and floats with [Welker] to get himself in position to get a catch. He’s done a nice job blocking for us both as an h-back as well as on the perimeter.

“He’s probably been our most pleasant surprise on offense this year with the production we’ve been able to get out of him with how physical and smart he’s been.”

Jackson’s theme of the week for each player was to focus on one thing, and Welker’s focus was ball security coming off a frustrating performance against Parkway Central. Welker threw a single-game, career-high two interceptions with 217 yards and only one touchdown on 25 attempts against the Colts.

Against Poplar Bluff, Welker finished 17-of-21 with a total of 388 passing yards along with his four touchdowns and only threw one interception. The sophomore also gained 51 rushing yards on six carries.

“[Tonight felt good] because we talked about how bad our offense played two weeks ago and how much better we should’ve done,” Welker said. “We came in and played well tonight.”

Jackson’s offense ran the ball a total of 31 times for 224 yards with three touchdowns as sophomore running back Daniel Dickerson led the attack once again.

Dickerson ran for a game-high 111 yards and scored all three rushing touchdowns on only 12 carries as fellow sophomore Dimechi Herring rushed for 42 yards on nine attempts. Herring also caught one of Welker’s four touchdown passes in the second quarter on a 35-yard play.

“Daniel had a couple of really nice, physical finishes on our sideline, and his last touchdown was a really good one,” Jackson Head Coach Brent Eckley said. “Dimechi had a couple really good finishes, too. I’m really pleased with those guys — they’re really coming along and ran with a lot of courage.”

This marks the third time Dickerson has scored at least three rushing touchdowns in a game and currently sits at 19 for the year. He has also gained 1,159 yards on his 132 carries with only three fumbles.

Defensively, sophomore outside linebacker Randol McDowell led the way with 13 tackles, five for a loss and two sacks as Poplar Bluff only managed to accumulate 112 yards of total offense.

Only nine of those came on the ground as Mules freshman quarterback Kannon Carr lost a total of 22 yards on seven carries. The leading rusher for Poplar Bluff was senior running back Shemyron Townsend with 28 yards on 15 rushes.

Townsend can be a difficult ball carrier to bring down as he scored two 70-plus yard touchdowns in the first meeting between both teams this season.

“It just goes to one person wrapping him up and the other person finishing the tackle,” McDowell said. “You just have to wrap him up and then somebody else has to hit him [for him to be brought down].”

In his first year as a starter, McDowell currently leads the team in tackles with 131 and tackles for a loss at 25 while being second in sacks with seven.

McDowell credits his success to working hard in the offseason such as hitting the weight room while also taking tips from his father Reagan McDowell, who also happens to be Jackson’s defensive coordinator.

The Indians defense has now recorded a total of five shutouts in 10 games.

Jackson also recorded its third interception of the season as junior cornerback Markiese Jones was able to make a nice play on the ball in man coverage.

“Markiese did a really nice job coming across the field and cutting in front of the receiver and high pointed the ball,” Coach Eckley said. “He did a really good job — real pleased with that.”

Poplar Bluff’s Carr threw the ball a total of 31 times while only recording 103 yards on 13 completions. The Mules leading receiver was junior Chad Casey, who hauled in four catches for 34 yards.

The Indians came up with a total of six pass deflections as Jones recorded one along with senior cornerback Jared Wren, who recorded 12 tackles along with one for a loss.

“We put some pressure on our secondary tonight, and I know we gave up a couple pass completions but overall our secondary played pretty well,” Eckley said. “We played a bunch of man [coverage] and blitzed, so [our defensive backs] had to do a good job.”

Jackson will now play in its third-consecutive Class 5 District 1 Championship and will host Fox (9-1) this Friday night at The Pit.

During the team’s bye week, the Indians were able to scout the Warriors, which runs a triple-option offense. Jackson has faced this scheme twice already against Farmington and Hillsboro this season, coming away with two shutouts while holding each unit to under 175 total yards.

“[Fox] has a big, physical offensive line, they have several guys that play both ways and I can tell that they have a bunch of wrestlers on their team,” Eckley said. “They’re a real physical offense, and they’re a defense that bends but doesn’t break. They’re going to keep it in front and not take a lot of chances and play gap control.”

Coach Eckley said Fox only wants to have around six offensive possessions per game to slow down opposing offenses and control the tempo of the game. He also said each of their offensive lineman weigh anywhere from 230 to 300 pounds.