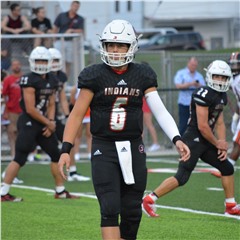 It was business as usual for the Jackson football team against SEMO
Conference foe Sikeston last Friday night at The Pit as the Indians came away
with a 53-0 shutout of the Bulldogs.

This was the third time Jackson held its opponent scoreless this
season, which had to wait one hour and 15 minutes to start the game due to
severe thunderstorms.

The Indians (4-0, 2-0 SEMO) started the game with an onside kick as
sophomore cornerback Blake Blackman recovered the ball for Jackson’s offense
to take the field.

Jackson head coach Brent Eckley said he and the rest of the coaching
staff saw that the Bulldogs (1-3, 0-2) had a hole in the return team, which
made them elect for sophomore Logan Bruns to kick the ball onside.

This nearly resulted in a touchdown the first play of the Indians
offensive drive, but junior quarterback Cael Welker’s pass to senior Seth
Waters, who had an open field to the endzone, was just out of reach. Jackson
ended up turning the ball over on downs three plays later.

“We talked about focus because just as what I was telling them we
needed to do adjustment wise, our defense was tackling them for a loss and
another loss,” Coach Eckley said. “It’s like, ‘They have the same players. So
what’s the difference?’ The difference in my opinion was they weren’t as
focused as we needed to be on offense.”

The Bulldogs start most players both ways like junior running
back/middle linebacker Lontas McClinton, who only finished with 3 yards rushing
on a game-high 11 carries.

Welker and the rest of Jackson’s offense did more than accept Coach
Eckley’s challenge of focusing as the Indians scored 38-unanswered points on
their next six drives.

Against Cape Central in Week 3, Welker failed to throw a touchdown
pass for the first time in his career and was also intercepted twice.

“Coach Eckley talked with me about how that was my first time never
throwing a touchdown, and he was like, ‘Let’s improve on that,’” Welker said.
“That was my main focus tonight heading into tonight was to have a better game
than last week.”

Welker did just that by throwing for a game-high 249 yards, four
touchdowns and had no interceptions while finishing 10-of-13 (76.9%) passing.
He also ran for a game-high 54 yards and one touchdown on four attempts.

Welker also distributed the ball to three different receivers on
his four touchdown throws with two going to senior wide receiver Luke
Starzinger and one each to fellow senior wideouts Dalton Skrob and Michael
Schneider.

On top of two touchdown grabs, Starzinger finished with a
career-high 150 receiving yards on his four receptions. He only recorded one catch
last week and had 58 yards receiving heading into the contest.

Welker first connected with Starzinger at the end of Jackson’s for
a 17-yard score on a rollout. Their final touchdown connection came when the
Indians were back up on their own 3-yard line, which allowed Welker to hit
Starzinger on a play-action pass for a 97-yard strike.

Jackson started the drive on its 1-yard line since Sikeston was
able to field the punt just before the ball reached the endzone for a
touchback. The Indians ran the ball on the first play as Welker only picked up
2 yards on an option keeper.

“I was like, ‘Oh God, what are we going to do?’” Welker recalled.
“[Starzinger] got behind the defense and it felt really good to get out of
where we were backed up. It felt even better that he scored the touchdown.”

Jackson’s defense did not allow Sikeston’s offense to accumulate a
single yard of total offense in the game as the Bulldogs finished with negative
29 yards for the game. This was due to the Indians front seven wreaking havoc
in Sikeston’s backfield with 17 tackles for a loss.

“I thought our defensive coaches did an outstanding job of
preparing our guys,” Coach Eckley said. “Our kids played really fast, but a lot
of it had to do with they had a really good feel where the offense was going.
It’s not very often you hold a team to negative yardage and score a touchdown
and a safety in the same game.”

Four of Jackson’s defenders tied for a game-high three TFLs as
junior outside linebacker Randol McDowell separated himself from the pack with
a game-high 11 tackles and recovered a fumbled punt in the endzone for a
touchdown in the second quarter.

This was when the Bulldogs were backed up inside their own 20-yard
line as their punter fumbled the snap in the endzone for McDowell to recover
the ball for paydirt.

“Well they weren’t really ready, and I could tell,” McDowell said.
“As soon as they snapped the ball, I thought it looked like it was going on the
ground, and I saw it hit the ground. I took off as fast as I could and just dove
on it when [the punter] was trying to pick it up.”

Amelunke also recorded one of Jackson’s two sacks against Sikeston
while junior outside linebacker Garner Horman recorded the other. Horman
finished with the second most tackles behind McDowell with eight.

“I think [outside linebacker] is a good fit for [Horman],” Norman
said. “He used to play safety and moved him down this year because we thought
he’d be a good fit. It really helps us out having him [in the front seven].”

Scoring the other two touchdowns for the Indians was none other
than Waters with a 9-yard run in the first half and sophomore running back
Joshua Wehrenberg off a 1-yard carry at the beginning of the fourth quarter.

The Indians defeated Battle 60-33 on the road in Columbia last
season, where Welker threw a career-high seven touchdowns.