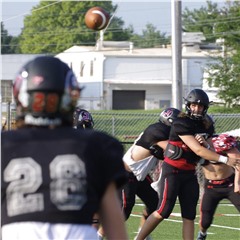 This past Saturday ended a 267-day drought of fans not being able to see the Jackson football team compete at The Pit as the Indians hosted their annual Gatorade Game.

However, due to the ongoing coronavirus pandemic, attendance was limited and the Jackson faithful had to both socially distance and wear masks in order to watch the game.

The lucky ones in attendance witnessed an Indians football team that is primed for success after finishing as the Class 5 state runner-ups in 2019 for the first time in 24 years. Jackson returns a total of seven all-state selections from last year’s team.

One of those returners is none other than the Indians three-year starting quarterback senior Cael Welker, who garnered first team honors for the second-straight time as a junior. Over the summer, Welker received an offer to play college football for Southwest Baptist — the same program former Jackson all-state quarterback Cooper Callis plays for now.

In the first drive of the Gatorade Game, Welker led Jackson’s offense to a score after breaking off a 35-yard run to get the Indians to the 11-yard line. Welker was replaced by backup quarterback junior Cameron Marchi on the next play, who then scored on an 11-yard run.

Welker hooked up with junior wide receiver Kannen Turley on the same drive for 15 yards to the 50, which helped set up Welker’s long run on a designed play for the unit to eventually score.

Welker was also able to find three-year starting wide receiver Ty Moran on several occasions throughout the game — proving to be a reliable target on the outside.

Picking up a plethora of college offers this offseason was Tollison, who officially committed to continue his playing career at Mizzou in March. Other offers for the two-time all-stater included Alabama, Oklahoma, Tennessee, Ole Miss, Texas A&M and Kansas State.

Dickerson missed most of last season due to an ACL tear that led to 2020 graduate Seth Waters taking over the starting duties in the backfield. Waters ended up garnering second team all-state honors like Dickerson did his sophomore year.

Another Jackson all-stater to pick up a college offer this summer was Liley, who received one from Central Missouri. Liley was named third team all-state as a tight end for the first time in his career last fall.

Liley almost came up with a touchdown catch on the second drive, but he was a little overthrown by Marchi on third-and-10 from 17 yards out. Liley helped set up a touchdown later in the game after getting the ball inside the 5-yard line on a slant route.

On the very next play, Welker hooked up with sophomore wide receiver Marquis Eckley for a 4-yard touchdown. Eckley came up with a total of three touchdown receptions on the night as the other two were from passes thrown by Marchi.

Eckley’s first touchdown grab was after two frustrating drives for Jackson’s offense that ended with interceptions. The first pick was taken back for a touchdown by sophomore Isaiah Davis, while junior safety Flint Guilliams made the final interception.

The lone returning all-state players for Jackson’s defense are senior inside linebackers Randol McDowell (two-time) and Bryce Norman, who combined for 357 tackles, 62 tackles for a loss, eight sacks, six forced fumbles and four fumble recoveries in 2019. The two also combined for 20 points off defensive touchdowns.

Norman, who was named first team all-state as a junior, received an offer to play in college from Arkansas Tech over the summer.

Horman is Jackson’s third top returning tackler after coming up with 63 stops last year along with 13 behind the line of scrimmage. Horman also scored two touchdowns with a pick six and fumble recovery.

Blackman returns as the team’s leader in interceptions as he recorded a total of four during his sophomore campaign while also having six pass deflections. Blackman cemented himself as a starter in Jackson’s secondary after Herring missed most of 2019 with a torn ACL.

Herring will continue to rotate at running back this year on top of his job as the team’s No. 1 corner. Joining Herring at corner and seeing less time at running back will be Wehrenberg, who scored seven touchdowns last year.