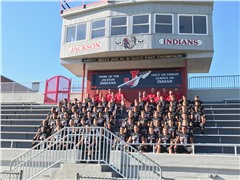 With the Indians already hosting their annual Gatorade Game on Saturday at the Pit, this means the Jackson football team’s 2017 season is officially underway.

Saturday was also where Jackson held its media day for photos, but the Indians suited up for the real deal later on.
The sun was shinning with clear skies for the team to take photos in the morning, but things were different heading into the scrimmage.

With rain in the forecast and cloudy skies, sixth-year head coach Brent Eckley had his first-team offense and first-team defense on the field nearly 10 minutes before the game was set to begin.

Back taking snaps for Jackson was second-year starting quarterback senior Cooper Callis, after leading the Indians to an 8-3 record and the SEMO Conference Championship in 2016.

Callis threw for a total of 2,947 yards, 34 touchdowns and 10 interceptions while completing 64.6 percent of his passes his junior year. He was named the SEMO Conference and All-Region Offensive Player of the Year following the season.

Jackson lined up in a five-wide receiver set to start the scrimmage with the Indians’ defense in a 3-4 scheme.
Callis’ first pass of the game was dropped by senior wide receiver Terrico Johnson, who dropped another pass in the end zone on the offense’s second possession.

Later during the offense’s first drive of the game, Callis was able to finish it by finding junior wide receiver Jordan Kent for a 64-yard touchdown on a corner route.

Kent, who is now the lone Kent on Jackson after his brother, Quentin, graduated, is the team’s returning leading receiver for 2017.

Kent caught 45 passes from Callis for 786 yards and a team-high 13 touchdowns while rushing for 170 yards and three scores last year.

Kent was also a fixture on special teams for the Indians as he recorded a total of 281 yards returning kicks.

“I think Jordan is the best athlete in our program, and I think this will be his third year being the best one,” Coach Eckley said. “I’ve never had a sophomore start for me at inside receiver, and he was able to score [16] touchdowns last year.”

Coach Eckley said Kent has “taken another step” in his game, and he proved that by leading the receiving corps with two touchdowns in the game.

Kent’s second touchdown came in the third series of Jackson’s first-team offense versus the first-team defense  series for six yards on a curl route in the end zone.

This came after Callis found a wide-open Johnson, who eluded defenders for a 23-yard gain to the red zone.

Johnson also made up for his drops in the second series when Callis connected with him for a 41-yard score.

Jackson’s offense mainly lined up in a five-wide set with senior running back Ethan Laster primarily playing with the defense at outside linebacker.

At outside linebacker, Laster recorded one of the two sacks for Jackson’s first-team defense. The other sack was made by sophomore Cole Amelunke, who lined up at nose tackle with seniors Justin Crane and Bailey Beggs at defensive end.

Defensively in 2016, Laster recorded 33 tackles, nine tackles for a loss and one sack at outside linebacker while not playing full time.

When Laster replaced his white jersey for a red one to play on offense in the scrimmage, he took over running back duties and lined up at wide out. Laster caught one of Callis’ five touchdown passes for 35 yards on a curl route later in the game.

Laster will have the job of replacing former Indian Bryndan Reid at running back this season, who rushed for 1,152 yards and 12 touchdowns on 184 carries in 2016.

Laster had 63 rushing attempts for 506 yards and three touchdowns his junior year. He also had 11 receptions, 207 receiving yards and one receiving touchdown.

With all of this talent at skilled positions returning to Jackson’s offense, expectations are high after the team made it to the 2016 Class 5 District 1 Championship where it fell to eventual state champions Vianney.

“I guess it’s two edged a little bit,” Coach Eckley said. “It feels great to have that kind of experience, and that kind of talent, but what goes along with that is the pressure of expectation. We do have some kids that are good, so they do need to perform.”

Lattimer, who was the starting center for the Indians last year, will be replacing the 2016 Class 5 SEMO Offensive Lineman of the Year Nick Freeman at left tackle.

Coach Eckley has been impressed by Lattimer’s offseason since he said he has gained over 40 pounds from last season heading into his final year at Jackson.

“I’m really pleased in particular with Cade with the weight he has put on,” Coach Eckley said. “He’s over 40 pounds heavier than what he played at part of last season. He’s had to work hard on it, and he would just assume not be as heavy as he is, but he knows that’s helpful for us.”

Rotating at right tackle was junior Dawson Southard and Amelunke with Cole having a majority of the reps in the team’s final two drives after moving from defense to offense.

Crane is the only returning defensive lineman with a sack from last season where he recorded two along 28 tackles and seven tackles for a loss.

The other starter at defensive end will be Bailey Beggs, who only recorded one tackle in 2016 as a backup linebacker.

“A kid that was a backup outside linebacker last year and has worked his tail off in the weight room getting more physical and has gotten bigger, and that is Bailey Beggs,” Coach Eckley said. “[Defensive end] is a great fit for him — he’s been a really positive, hard-working leader for us over the last two to three months.”

Senior inside linebacker Nathan Brown returns as the team’s only defender to record 100-plus tackles a year ago with 117. Brown also recorded a team-high 13 tackles for a loss along with two sacks and one interception.

“Nathan has had an outstanding offseason,” Coach Eckley said. “That’s another kid that put weight on. I think he’s 195 to 200 [pounds], and at the same time, every time we’ve tested him his vertical has went up, his pro agility has went down and his 20 [yard dash] has went down.”

Returning to the secondary will be senior cornerback Cole Welker, who had a team-high four interceptions and 12 pass deflections.