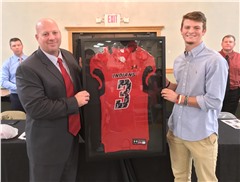 The Jackson football team held its annual end of the year banquet for the 2017 season on Dec. 14 at the Knights of Columbus banquet hall.

Head coach Brent Eckley started the night off by thanking his coaches, the coach’s wives and everyone in the community who helped with the program this season.

Starting with the freshman class, each player received their letter for being a part of the team this season.

Lastly, were the seniors, who did not only receive their final letter, but were awarded with a framed, red jersey followed by their respective position coaches taking a moment to speak about them as an individual.

One of those seniors was quarterback Cooper Callis, who threw for 3,807 yards, 56 touchdowns and 12 interceptions with a 65.7 completion percentage in 2017.

Coach Eckley said Callis has not only made him a better coach because of the player he is on the field, but the type of player Callis is on the practice field for always wanting to improve.

Callis, who was this year’s Carr Trophy recepient for being the best player in southeast Missouri, was named to the Missouri Football Coaches Association Class 5 All-State Third Team as well as first team all-region, first team all-district and first team all-conference.

Snapping the ball to and protecting Callis this season was senior Owen Leible.

Jackson’s offensive line coach Darron Bardot said he believes Leible should play college football because of his knowledge and skill playing offensive line as well as his leadership skills.

Leible played in the Blue-Grey All-American Bowl game at AT&T Stadium, the home of the Dallas Cowboys, on Monday as a member of the East team.

Jackson’s third all-state selection was the team’s leading receiver in junior Jordan Kent, who was named to the third team.

The fourth and final Class 5 All-State selection was senior inside linebacker Nathan Brown, who recorded a team-high 196 tackles to be named to the third team.

Defensive coordinator and coach of the inside linebackers Reagan McDowell first spoke about Brown’s skill as a defender in being able to chase down ball carriers.

McDowell continued to say Brown is so successful as a football player because of his dedication to the weight room, even joking by saying when he would ask Brown what his plans were for weekends, Brown would simply reply “working out.”

Laster rushed for 1,366 yards and 11 touchdowns on 117 carries while also catching 27 passes for 522 yards and seven touchdowns.

Defensively, Laster recorded 65 tackles and tied for the team-high in sacks at six with senior defensive lineman Justin Crane.