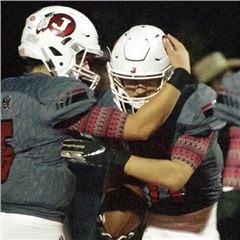 For the first time in program history, the Jackson football team officially finished the regular season undefeated for back-to-back years. The Indians were able to accomplish this feat in their 1,099th game with a dominant 52-6 win over Parkway Central at The Pit.

“I’m really, really, really proud of our kids,” Jackson head coach Brent Eckley said. “We talked about this a little bit in the classroom before we played. We talked about the people that I admire most, and I had to tell them who that was outside of this room. Then I said, ‘In this room, there’s a lot of guys I admire as much as anybody.’ They’re a group that works — they sacrifice [time] and do a bunch of training. They take coaching, and they’re just committed and dedicated. It’s very uncommon for teenagers to do that.”

Leading the way offensively for Jackson was junior quarterback Cael Welker, who threw for a season-high six touchdown passes along with 290 yards and had one pick while going 23-for-31 for a 74.1 completion percentage.

Welker’s fourth interception of the year came when sophomore wide receiver Kannen Turley ran the incorrect route. The pick was taken all the way back for a near 85-yard touchdown return by sophomore Cam Harris.

Welker was able to find Turley for the opening score of the game on a 33-yard play, and the two connected for four more scores after the Indians lone turnover of the game.

“[Turley and I] started off not on the same page, and we talked on the sideline about it and got things figured out,” Welker said. “We came back out, and the good thing is he didn’t pout about [running the wrong route] or anything. He came back out and was ready — he caught the ball well and was open. He was huge for us.”

Turley finished with a total of 98 yards along with his career-high five touchdown receptions off eight catches as the wideout entered the game with five touchdown grabs all season.

Welker’s sixth touchdown pass went to senior wide receiver Dalton Skrob, which was in the third quarter as Welker heaved the ball to Skrob on a go route for a 48-yard touchdown. Skrob finished with a total of 92 yards receiving with five catches.

Welker has now thrown for 917 yards, 16 touchdowns and only two interceptions with a completion percentage of 73% on 80 attempts in Jackson’s last three games.

The Indians totaled 629 yards of offense as Welker also ran for 89 yards on 10 carries, while senior running back Seth Waters led the game in rushing with 167 yards and one touchdown on 21 carries. Waters also caught three passes for 31 yards.

“I like [Waters] because I can throw it to him — I threw him a little route in the flats, and he made 10 or 15 yards out of it,” Welker said. “In the run game, he just knows where to go. He can see his cut he needs to make and the defense.”

Jackson only led Parkway Central 7-6 heading into the second quarter following the pick-six as Waters scored his lone touchdown of the night with a 1-yard run. This created a streak where the Indians scored on their next three offensive drives, which were all short-yardage throws from Welker to Turley for touchdowns.

Jackson led the Colts 31-6 heading into halftime as the Indians defense once again kept an opposing offense scoreless. Parkway Central was only able to muster 83 yards of total offense with 47 of them coming through the air and only 36 on the ground.

The Colts leading rusher was junior fullback Adam Geisz, who ran for 20 yards on 10 carries. Finishing behind him was freshman running back K.J. Little with 14 yards on four attempts.

Parkway Central’s quarterback senior Antonio Hutti only completed five of his 17 attempts for 47 yards with no touchdowns and one interception. He also only gained five yards running the ball. Hutti’s top target was 6-foot-4 senior wide receiver Cameron Roberts, who was only able to record two catches for 20 yards.

Leading Jackson’s defensive attack were the usual suspects as junior outside linebacker Randol McDowell and junior inside linebacker Bryce Norman each recorded a team-high 11 tackles. Norman was able to separate himself with four tackles for a loss to McDowell’s lone stop in the backfield.

Also coming up big for the Indians defense was three-year starting defensive lineman senior Cole Amelunke, who recorded the unit’s only sack along with five tackles and two stops for a loss.

“I feel really great about our team, and I’m proud of our team,” Amelunke said. “We’ve had a couple games where we started out slowly, and we didn’t stay consistent throughout the season, but we’ve figured a way to pull [out the win] in every game.”

Jackson (9-0) will host each game it plays in the Class 5 District 1 Tournament once again as the No. 1 seed, starting with No. 4 Seckman (2-7) next Friday night.

The Indians and the rest of the teams in Class 5 District 1 have a bye this week, which allows players to get much needed rest and hopefully for a few to return from injury like senior wide receiver Luke Starzinger and senior defensive end Bret Meyer.

“We have had a bye every season that I’ve been here except one, so I think we’re getting a little better at handling it and knowing what we need to do,” Coach Eckley said. “We’re trying to get the kids their legs back and feel good and fresh again. That’s why we give them a little bit of time off. We’re lessening their volume in the weight room at this point in the season because we think we can maintain their strength.”