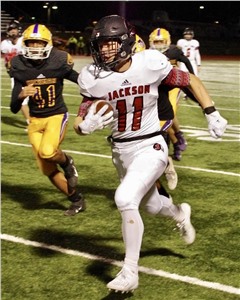 On the last Friday night of the regular season Oct. 23, the Class 5 No. 3 ranked Jackson football team traveled over 200 miles north to Columbia to face Class 6 unranked Hickman before the start of postseason play.

The Indians (9-0) finished regular-season play unbeaten for the third-consecutive season by handing the Kewpies (2-6) a 56-7 loss. Hickman didn’t score until the fourth quarter when Jackson had its second and third-string players on the field.

“To start with [going undefeated three years in a row] starts with good players,” Jackson head coach Brent Eckley said. “We’ve been fortunate in the schedule, and we’ve been fortunate in health. I thought our coaches have done a really good job continuing to adjust and motivate. It takes a lot, but the kids are the main part. They’re talented players, and they work hard.”

Leading the Indians in the scoring column was none other than two-time, all-state senior quarterback Cael Welker, who finished 8-for-8 passing the ball with three touchdowns and zero interceptions. Welker went the entirety of the 2020 regular season without throwing one single pick.

Welker’s top target in the matchup was junior wide receiver Kannen Turley as he only recorded one catch that wasn’t for a touchdown. Turley finished with three receptions for 83 yards and two touchdowns in Jackson’s 49-point win.

The other Indian to come up with a touchdown grab was sophomore Marquis Eckley in the second quarter for Jackson’s fourth unanswered score of the game.

Even though he didn’t come up with a touchdown catch, senior wide receiver Ty Moran was also heavily involved in the passing game.

“I was real pleased with that tonight that [Welker] was able to throw to some different guys,” Coach Eckley said. “Ty Moran had a real nice night tonight and caught the ball securely. I was pleased with all of our receivers catching the football consistently. It was good the whole night, and we threw it and caught it pretty well.”

Defensively, the Indians were able to score two touchdowns as the first came off a blocked punt in the endzone, which was recovered by sophomore defensive end Tony Terry. This was Terry’s second fumble recovery for a score this season.

The second and final touchdown recorded by Jackson’s defense was a pick-six made by junior outside linebacker Ryley Styer. After making the interception, Styer broke off for 44 yards and the touchdown.

Styer was also to bring relentless pressure on the quarterback throughout the game as he even forced junior LJ Williams to exit the game due to aggravation after being hit back-to-back times.

“[Styer] played really fast tonight,” Coach Eckley said. “He had an offsides in the first half that gave Hickman a first down, and he was frustrated about it. We were frustrated about it, and I think he felt like he owed us. He did a great job jumping the play and scoring.”

Jackson’s three other scores were in the run game as Welker and running backs senior Daniel Dickerson and sophomore Tony Williams each found paydirt.

Williams scored a 1-yard touchdown run after Welker hooked up with Turley for a 32-yard pickup in the first quarter. Dickerson’s lone score of the contest came at the beginning of the second half when he broke off a 34-yard run to the endzone.

“I thought we executed very well,” Coach Eckley said. “We were able to get some formations and tweak some things around. We went with a fast tempo, and I thought our kids did a really nice job with that.”

Now that Jackson has finished the regular season undefeated once again and won a third-straight SEMO North Conference Championship, it is now focused on winning the Class 5 District 1 title for the third year in a row.

The Indians earned up the No. 1 seed to have home-field advantage and a first-round bye, so they will have this Friday night off and won’t play again until Nov. 6. Jackson will either host Poplar Bluff (4-3) or Mehlville (2-1) in the semifinals that day.

The district championship will be Nov. 13, where the Indians will likely face Farm-ington (7-2) or Seckman (5-2) for the title. Jackson defeated the Knights 56-14 to win the conference title on Oct. 9 and beat the Jaguars 55-14 in the district semifinals last year.