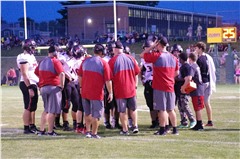 Coming off a season where the Jackson football team went 2-0 to start the season after defeating Class 6 Lindbergh 49-19, the Indians are 1-1 after traveling to St. Louis to face the Flyers.

“Every season is different — every team is different,” head coach Brent Eckley said. “… We knew Lindbergh was better just based on how they played against Oakville last week. And its their second year in the same system, so that makes a huge difference.

“I don’t think we gage the rest of our season based on what happens in game two, but we certainly have to re-look at what we’re doing and how we’re doing it. See if we can do something better.”

Heading into the game, Coach Eckley said he knew the Flyers were going to try to run the ball extensively to open up the play-action pass.

Powell’s first two passes went incomplete, but his third one was intercepted by senior cornerback Cole Welker for Jackson to take over at its own 14-yard line.

Three plays later after Jackson’s offense picked up the first down, senior quarterback Cooper Callis threw his first interception of the game, third on the season, after the ball went over junior wide receiver Jordan Kent’s head.

Lindbergh scored its first points of the game off that interception via a 22-yard field goal by senior Garret Butz. The score didn’t come till near the three-minute mark, thanks to Lindbergh’s run offense and converting on two fourth downs.

“[The interception] gave them a short field — it is what it is,” Coach Eckley said. “I’m not for sure with all the plays in the game — I can’t even think now to what he saw on it, but it is what it is. It was miscommunication between quarterback and receiver. That happens sometimes when you’re throwing the ball, but overall I thought he played OK. We struggled with consistency, and we struggled with being able to execute.”

Jackson turned the ball over on downs in its drive following Lindbergh’s three points, thanks  to senior linebacker Theo Price bringing Callis down in the backfield for a significant loss.

The first quarter came to an end with no other scores, but on the first play of the second quarter, Powell found senior wide receiver David Grenia for their first touchdown connection in the game for 69 yards.

After Linbergh got the ball back following a three-and-out by Jackson, the Indians came up with another turnover. This time it was senior safety Jared Wren forcing the fumble for the Indians to take over at their own 14-yard line yet again.

Things would end differently on this drive for Jackson offense since Callis capped off the 86-yard drive with a three-yard touchdown run on an undesigned run to the right.

Lindbergh went for the play action right off the bat when the Flyers got the ball back, which resulted in Powell finding Grenia for another touchdown, this time for 50 yards.

“When you give up a big chunk play, it’s always frustrating,” Coach Eckley said. “I used to track that many years ago that if we gave up a passing touchdown, we wouldn’t win. Since then [with] teams being more pass oriented, there’s times where you’ll give one up and it [does] not kill you. Those momentum plays kill us — it’s a stake in the heart of the defense.”

The Indians went three-and-out on the drive to follow, turning the ball over on their own 33, allowing Lindbergh to have a short field to work with up 17-7.

Lindbergh fed the ball to sophomore running back Bobby Tessler three times in a row starting at the 25, who eventually found paydirt from three-yards out.

Callis was taken out of the game for one play due to his helmet coming off, which allowed for senior Ethan Laster to throw Jackson’s second interception of the game on a option play.

Rico Payton was the player to come up with the interception for Jackson, who returned the ball to the Indians 31-yard line.

On the first play of the drive, Powell first pump faked the ball, and then found Payton for the touchdown through the air for Lindbergh to take the 31-7 lead.

Coach Eckley emphasized to his team they needed to start executing, and the Indians did so on their opening drive in the second half.

Callis connected with Kent for a six-yard touchdown to finish Jackson’s 65-yard drive to make it 31-13 with a little over nine minutes remaining in the third.

Lindbergh answered back with a score of its own less than four minutes after, though, as Powell connected with Payton again for a 20-yard touchdown to extend their lead to 38-13.

Jackson turned the ball over on downs to follow, which allowed Lindbergh junior Sam Huff to run up the middle of the Indians defense for a 45-yard score.

“We had three or four drives that had gone well, and we just shot ourselves in the foot,” Coach Eckley said. “Whether it be a busted assignment, a penalty or a dropped ball. It was just little things, and we are a little ways away.

“We’ll go back and look at the film to see what we can clean up, see what we can pull out of the playbook to turn it down some so we can execute a little bit better with what we have.”

Heading into week three at 1-1 to face an undefeated 2-0 Sikeston team at the Pit, Coach Eckley knows his team must focus on the little things if Jackson wants to win a second-straight SEMO Conference Championship.

“We know that Sikeston will be excited to come play at our place because they know they haven’t played their best football against us the last couple of years. I think they’re a better team than they’ve shown, so I’m sure they’re hungry to be able to show how good they are.”