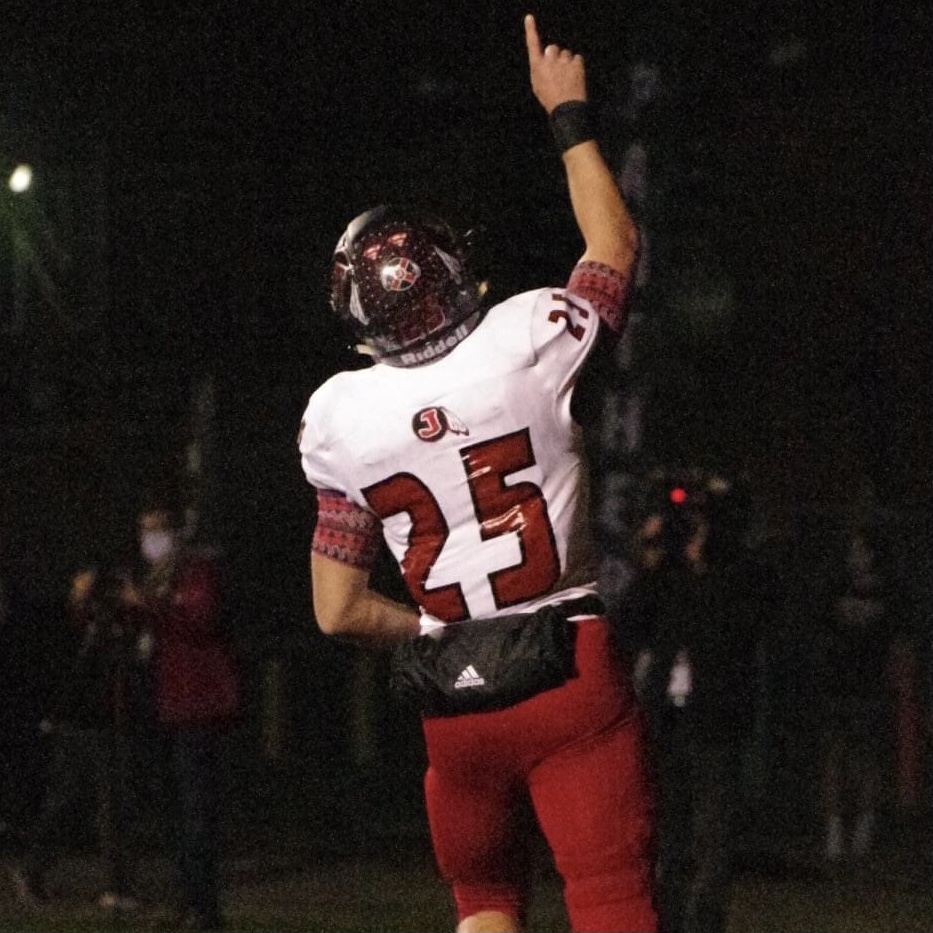 For the second time in 25 years, the Jackson football team will be playing in the state championship game for the second year in a row this Saturday. The undefeated Indians (13-0) accomplished this feat by handing Ft. Zumwalt North (11-2) a 49-14 loss in the Class 5 Semifinals Friday on the Panthers home field.

“[Winning a semifinal 49-14] doesn’t happen very often,” Jackson head coach Brent Eckley said. “You go back and look at the history of high school football, there’s not a lot of semifinal games that you get a running clock. I [told my players to look at the scoreboard after the game] because I wanted them to recognize the special team they’re a part of.”

Jackson’s starting defense held Ft. Zumwalt North to only one score in the first half as the unit also recorded five tackles for a loss, five pass deflections, three sacks, three fumble recovers, one blocked kick and one interception. The Panthers offense was held to 235 yards as senior quarterback Jack Newcomb was their only player to accumulate over 100 yards.

Newcomb did so with a game-high 121 passing yards with one touchdown and one interception while going 9-for-19 (47.3 completion percentage) through the air. However, Newcomb only totaled two yards on 12 carries.

The Indians offense had no trouble having success since they arguably have the best offensive line in the state with all-state offensive tackles senior left tackle Connor Tollison and junior right tackle Ashton Flinn leading the way. Jackson was without Flinn for the last two games.

Also on the offensive line for the Indians is senior center Thomas Ruch and juniors right guard Liam Bryant and left guard Tanner Raines. Raines made an effortless move to right tackle in Flinn’s two-game absence.

“We were thinking about a month ago when we lost Ashton for a couple games that if we could get him back, it would be a nice shot in the arm once we’d get to the semifinals,” Coach Eckley said. “That’s kind of how it’s worked out. Flinn had a great week of practice, and it’s tough for anybody to deal with [Flinn and Tollison] next to each other, which we did some throughout this game.”

With these five lineman leading the way, Jackson’s offense recorded a total of 486 yards with 377 coming on the ground. The Indians two-headed monster of running backs senior Daniel Dickerson and sophomore Tony Williams combined for 232 yards and four touchdowns on 20 attempts.

Dickerson scored all four of the rushing touchdowns, however, as he carried the ball nine times for 119 yards. Williams led Jackson in attempts with 11 as he finished with 113 total yards after picking up 110 in the third quarter alone with runs of 32, 30, 26 and 22 yards.

“What Ft. Zumwalt North did defensively, they kind of gave us some seams and some angles,” Coach Eckley said. “If we were effective blocking and blocked the right guy — we had to have about four of those per play — it ended up being a chunk play. We talked about that being the way it could go, so our guys did a good job upfront.”

Even though the Indians only threw the ball on 12 of their 53 plays from scrimmage, Welker still completed eight of his 12 attempts (66.6%) for 109 yards and has still yet to throw an interception this season.

While he didn’t throw a touchdown pass, Welker did score twice on the ground off 10 carries for 64 yards. The final touchdown run by Welker was one he broke off 40 yards for.

Leading Jackson in receiving was senior tight end Rhet Liley off one catch for 44 yards, which setup an 8-yard touchdown run by Dickerson two plays later to give the Indians a 21-0 lead near the end of the first quarter.

Liley joined the Indians rushing attack right before halftime when they went with their jumbo package. In this formation, Liley takes the direct snap and runs behind the offensive line as well as blockers like Dickerson and senior inside linebackers Randol McDowell and Bryce Norman.

It only took Liley three plays to score while doing this as he ran for 21 yards and produced an 8-yard touchdown to give Jackson a 35-7 lead with 37.7 seconds left in the first half.

Defensively, Norman led the way with 14 tackles, two tackles for a loss, one sack and one fumble recovery. McDowell paced him in total stops with eight as he also produced a sack and two quarterback rushes while also recovering a fumble.

Jackson’s final sack was made by senior outside linebacker Garner Horman as he also made one stop behind the line of scrimmage and recorded his team’s lone forced fumble. Sophomore defensive end Tony Terry finished third in tackles for the Indians with six as he also blocked a punt and batted two of Newcomb’s passes at the line of scrimmage.

Coming up with Jackson’s one interception of the game was junior cornerback Blake Blackman on top of his four tackles. Making two pass breakups in the secondary for the Indians was senior cornerback Dimechi Herring as Horman had one as well.

The Indians have yet to win a state title in school history as they fell to Carthage 27-21 in last year’s Class 5 State Championship. In Jackson’s two other state title trips, the Indians fell to Excelsior Springs 12-6 in 1994 and Camdenton 20-19 in 1995.

“We do not want to repeat history,” Coach Eckley expressed. “Whomever we play we have a big challenge ahead of us. We’ve talked to our players about how we have the ability to win our last game. We want to make sure we put our best foot forward next week, so we’ll have a great week of practice I’m sure and do that.”

This time around, Jackson will face Platte County (12-1) for the state championship, which is coming off a 24-21 win over Webb City in the other semifinal. Last season, Webb City defeated Platte County 48-0 for the Class 4 State Championship. The Pirates lone loss of this fall came to North Kansas City 42-37, a loss Platte County avenged in the postseason by a score of 24-17.