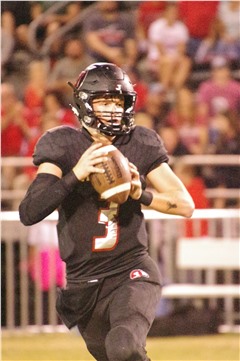 Senior night for a high school athlete is when their four years of hard work is finally celebrated, and for the Jackson football team’s senior quarterback Cooper Callis, it was more than just a night to remember.

On Friday, Sept. 1, Jackson hosted SEMO Conference opponent Sikeston, and Callis threw a single-game, career-high seven touchdown passes for the Indians to win 55-8 at The Pit.

Callis threw each of his touchdowns in the first half where Jackson took a 49-0 lead over the Bulldogs, with five different Indians being on the receiving end of those passes.

“I didn’t even know that I threw for that much till after the game when I was talking to my dad,” Callis said. “This might sound cliche, but the offense didn’t make it that hard on me. [Head coach Brent Eckley] called plays to where receivers got open, the receivers caught the ball really well tonight and I had as much time as possible to throw the ball.”

Callis was also able to complete 76.9 percent of his 26 passing attempts for 265 yards and had only one interception, which was the only turnover on the night for Jackson.

The Indians offense was able to have the first possession of the game, thanks to the kicking team, when senior Cole Welker booted the ball onside for his team to recover.

Jackson decided to kick the ball onside to start the game because of the look Sikeston’s kickoff return team gave them, according to Coach Eckley.

“That’s something we’ve worked on for quite a while now,” Coach Eckley said. “We just didn’t get a good look that we liked in the first two games, and we just got the looked that we liked so we were able to take advantage of it. Cole Welker did a great job kicking it — he spotted it very well all night.”

Welker was even able to recover one of his own onside kicks later in the first quarter, but the first kick recovered by Jackson led to Callis finding junior wide receiver Jordan Kent for a 9-yard score to go up 7-0.

Sikeston was able to maintain possession of the ball on its first drive for nearly five minutes.

The Indians forced Sikeston to turn the ball over on downs at Jackson’s 5-yard line thanks to senior running back/linebacker Ethan Laster tackling Sikeston junior quarterback Nate Self for a 1-yard gain on fourth-and-goal.

Jackson’s offense then drove the ball down the field for 95 yards, which was capped by Callis connecting with senior wide receiver Terrico Johnson in the endzone for another 9-yard touchdown.

Callis and Johnson connected for a second touchdown later in the game with around five minutes remaining in the first half.

The Indians were at Sikeston’s 14-yard line after recovering a fumble on kickoff and Callis lobbed the ball to Johnson, who leaped over two defenders to snag the ball for six.

“I didn’t have any doubt that he was going to catch that ball,” Callis said. “I think that’s what is really cool about it. All of us have been playing together for so long it’s like whenever I threw it up to him, I knew that he was going to come down with it. That’s pretty awesome to have that feeling.”

Johnson wasn’t the only receiver for Jackson to have two touchdown receptions in the game.

Kent caught a second touchdown in the first play of the second quarter for 38 yards as the Indians took a 21-0 lead over Sikeston.

Johnson’s final touchdown of the night allowed Jackson to take a 42-0 lead, and the type of play the Indians receivers displayed against Sikeston is what Coach Eckley has wanted.

“That’s the stuff we’ve kind of been looking for from our receiving core,” Coach Eckley said. “Jordan Kent had some nice plays, and Drew Moran came out of the gate and had a couple big catches for us. Jack Warren caught a deep ball for a touchdown on a double move, so I was pleased with how they contributed this week. This is kind of what we had been expecting  from them.”

Heading into the game, Coach Eckley had the offensive line focus on their physicality at the point of attack.

This boded well for the group as Callis was able to get the ball off with plenty of time, and he was impressed with his line following the game, especially freshman left tackle Connor Tollison.

“[The offensive line] wants to be good — I feel good about that because they stay after practice for at least 30 minutes going over plays,” Callis said. “Stuff that they wouldn’t do if they didn’t want to be better. Connor specifically — he’s played really, really well. I was telling him tonight I’m really proud of him — that’s hard to do as a freshman to come in and play as well as he’s been playing.”

Even though Jackson’s offense executed well enough to have 454 yards of total offense, the team’s defense was a key factor in shutting out Sikeston the first half.

Senior linebacker Nathan Brown and sophomore Luke Starzinger had the duties of containing Sikeston running back Matthew Perry, who had rushed for a total of 312 yards coming into the game.

Brown, Starzinger and the remainder of Jackson’s defense held Perry to just 83 yards on 17 carries. The two linebackers combined for a total of five tackles for a loss while Brown lead Jackson in tackles with 12, bringing his season total to 57.

“I don’t watch a whole lot of the defense when we’re making adjustments with film during the game, but I always enjoy watching it Saturday morning,” Coach Eckley said. “I watch every clip through several times, and Nathan was outstanding last week — better than what he was in week one. We expect him to just continue to improve because he’s such a hard worker. It’s just important to him.”

The Indians secondary impressed Coach Eckley by keeping Sikeston’s quarterback Self to just 53 passing yards and a 38.1 completion percentage.

Jackson was able to pick him off near the end of the first quarter when Self’s pass fell out of the hands of junior wide receiver Ricky Scott and into senior safety Jake Friedrich’s for his first interception.

Starting cornerbacks Welker and sophomore Markiese Jones only allowed a combined eight catches with each defender having a pass breakup.

Jones’ deflection came on Sikeston’s first drive when Self tried to complete a pass to Scott in the endzone, but Jones was able to place himself right between the receiver and the ball for the pass to fall incomplete.

“Markiese has shown that ability, and I think he played his best game tonight,” Coach Eckley said. “He had a really good week of practice. He improved his physicalness and made a nice play near the back of the endzone. He’s just getting better.”

Fellow sophomore defensive tackle Cole Amelunke came up with his first sack of the season. He was able to bring down Self for a loss thanks to Ethan Laster bringing the pressure, forcing the Bulldogs quarterback to try and elude him, but instead running into the arms of Amelunke.

“Cole Amelunke did some good things in there on the inside — he was playing against a kid that was about his size instead of one that was 280,” Coach Eckley said. “He did a good job and made some really big plays for us.”

Heading into week four, Jackson will host the Marion Patriots (0-1) out of Arkansas, which defeated the Indians 62-35 for their first loss in 2016.