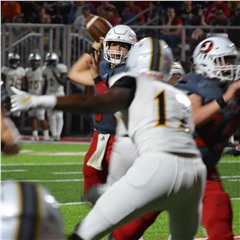 In the first Class 5, top-10 game of the season for the No. 4 ranked Jackson football team, the Indians blew out No. 7 Battle 56-12 on homecoming night at The Pit.

Jackson’s defense had yet to allow a single point at home all season before facing the Spartans, but the unit still only allowed 240 yards of total offense by holding Battle’s rushing attack to 90. The Spartans averaged 270.2 rushing yards per game heading into the contest.

Besides allowing a team to score for the first time at The Pit this year, defeating Battle by 44 points and recording a sack was the best way junior inside linebacker Bryce Norman could spend his birthday. Norman also recorded 13 tackles and two stops for a loss.

“We had watched a lot of film on Battle for this game, but they came out and gave us something different,” Norman said. “Last year they scored 33 on us, and that was not acceptable. We’re kind of ticked about [letting them score this year].”

Norman also said beating a team like Battle by such a wide margin makes a statement about how far Jackson can go in the postseason this year. “I think we’re going to go all the way hopefully.”

This was the fourth top-10 matchup for the Indians second-year starting quarterback junior Cael Welker, who is now 3-1 against statewide media ranked opponents. Welker completed 80% of his passes on 25 attempts for 315 yards, four touchdowns and no interceptions against the Spartans.

“[Welker] loves football, and he loves to practice — he loves being out here with the guys, so it’s easy for him to continue to improve,” Jackson head coach Brent Eckley said. “He doesn’t have a bad day on the practice field and that’s why he has good Friday nights. We continue to give him all kinds of stuff to process and manage. He’s like a sponge, he soaks it up, and he thrives on that challenge, ‘Give me one more thing that I have to be able to manage to help us be successful.’”

Welker threw for a career-high 516 yards and seven touchdowns against Battle last season, and he admitted he was nervous heading into that game since it was the first time he would play a ranked opponent.

After his team’s defense forced Battle to turn the ball over on downs to start Friday’s game, Welker and the Jackson offense marched down the field for a 12-play, 67-yard touchdown drive. This took all of Welker’s nerves away.

This ended up being the second-straight game where Welker has connected with three different receivers for scores as sophomore wide receiver Kannen Turley had the best game of his career with six catches for 98 yards and two touchdowns.

Heading into the game, Turley had yet to catch a touchdown pass with five catches for 52 yards in the Indians first four games.

“Kannen saved me a couple times where I’d throw it up, and it slipped out of my hand one time,” Welker said. “He climbed the ladder and caught it, so I was really impressed with him tonight.”

Jackson’s offense was called for holding to move the offense back to around the 20-yard line, but Welker faked the defense with the read option to find a wide-open Turley for the score. This score gave the Indians a 21-6 lead over Battle with around 11 minutes left until halftime.

Welker’s second touchdown pass of the night before finding Turley in the endzone again was to senior wide receiver Luke Starzinger, who broke off for the 50-yard score with under one minute left in the first quarter.

The Spartans answered on the following drive as they pitched the ball to junior Khaleel Dampier, who then heaved the ball to senior Dawson Meierotto for a 64-yard pass to Jackson’s 1-yard line. Battle senior quarterback Harrison Keller ran for a touchdown on the next play.

The only other touchdown Battle scored was in the fourth quarter with the clock running as senior running back Darren Jordan found the endzone with a 3-yard carry.

Jordan rushed for a team-high 53 yards on eight carries, while the Spartans leading rusher heading into the game junior DaleShaun Coleman only ran once for a loss of eight yards.

Keller, Battle’s second leading rusher, was only able to gain four yards off 10 carries as he was mainly met in the backfield by an Indian defender for a loss.

“It was a really good job by our defense,” Coach Eckley said. “I think the critical part of the game was in the second quarter. We were able to score, and I think we forced them into two or three three-and-outs in the quarter and it put the pressure on them.”

Jackson’s defense recorded a total of 15 tackles for a loss as junior outside linebacker Randol McDowell led the team with three while coming up with a game-high 14 tackles and also had a sack.

Also making plays in the backfield were defenders like senior defensive end Cole Amelunke, senior safety Caleb Craft, senior inside linebacker Riley Pike and junior outside linebacker Garner Horman who each had two stops behind the line of scrimmage.

The Spartans only converted one fourth down attempt and tried to do so with screen passes to their running backs. Meeting them at the line from their safety positions were players like Craft as well as fellow senior safety Grant Sides.

Another member of the Indians secondary to have a big game was sophomore Blake Blackman at cornerback, who recorded a game-high two interceptions.

Most of Jackson’s defensive stops allowed for the team’s offense to have a short field, which allowed the Indians to have two separate drives where it only took them two plays to score.

The first was when Welker hit Starzinger for a 50-yard touchdown strike, while the final two-play scoring drive was capped off with a touchdown run by senior running back Seth Waters.

Waters scored on a 27-yard run after Blackman’s first interception of the game, while he also scored on the Indians next drive with a 17-yard gain. He ran for a game-high 118 yards on 16 carries.

The final touchdown of the first half would be Welker’s final touchdown toss of the night as he found junior wide receiver Rhet Liley in the endzone for 17 yards on a four-play drive. Jackson took a 42-6 lead over Battle heading into the locker room.

The Indians two touchdowns in the second quarter all came on the ground as Starzinger found paydirt for the second time in the game with a 3-yard run off the jet sweep. Freshman running back Tony Williams scored on a run in the fourth quarter.

“Our offense was focused tonight, and that’s what I’ve been looking for in the previous eight quarters,” Eckley said. “ … Offensively we spread the ball around pretty well and had good balance.”

The Indians have now officially moved up to No. 2 from No. 4 in the Class 5 statewide media rankings as Battle dropped down to No. 9. Ft. Zumwalt North (5-0) is the No. 1 ranked team in Class 5.