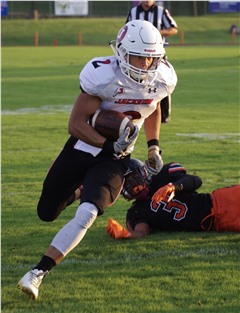 It was Senior Night for the Jackson football team as the Indians hosted Parkway North on their new artificial turf field at The Pit on Friday.

Jackson came away with a 35-0 shutout of the Vikings, the defense’s first time not allowing a point since 2015 in a 41-0 win over Sikeston at home.

“Our defensive guys just competed really, really well,” Jackson Head Coach Brent Eckley said. “They were coachable, their angles were good, they ran to the ball well — they just did a lot of things well.”

Along with the shutout, Jackson’s defense allowed a total of 81 yards from scrimmage as the Indians offense accumulated 536 yards.

Junior safety Caleb Craft came up with an interception on the Vikings second drive and four defenders were able to get to senior quarterback Cameron Foster for a sack throughout the game.

Kent finished with a total of five touchdown catches completed by sophomore Cael Welker after they both turned the ball over in the first half.

“We just took a while to get going,” Welker said. “Like last week at Webster Groves we got our offense back together and got Jordan rolling. Just get the ball to him and he makes thing happen.”

Welker threw an interception on Jackson’s opening drive, and Kent felt everyone was nervous because of the caliber of player the Vikings had in Williams.

“After the first touchdown, we just got rolling,” Kent said. “It feels great to go up against [a future Division-I player] — we came out here and we did what we had to do.”

The Indians first touchdown of the game was when Welker escaped a pass rusher, rolled out right and threw the ball to Kent at the sideline with 10:39 left in the second quarter.

Kent had to make a leap for the catch, but once he caught it he was able to out run the Vikings defense for a 38-yard touchdown.

Kent also finished with a single-game, career-high 276 receiving yards on only nine catches for an average of 30.7 yards per reception.

“I’ve said for a long time that [Kent] has been the best athlete in our program since he was a freshman,” Eckley said. “This was his best offseason, and he’s done the most work. He’s a kid with the tools he’s had — he’s also contributed [to his skills] rather than just what God gave him.”

Welker finished with a career-high 377 passing yards with a 60.7 completion percentage in the second start of his career.

One drive Coach Eckley was impressed with offensively was when they ran the two-minute drill with around a minute remaining in the first half.

Eckley said he didn’t think the offense had much of a chance to score a touchdown and was hoping to get in field-goal range.

The offense proved him wrong, though, as Welker was able to find Kent for a third time as the senior receiver speeded past Williams for a score with 5.1 seconds left until halftime.

Down 20-0 entering the second half, Parkway North received the football and was able to reach Jackson’s 40-yard line.

The Indians didn’t allow a single yard once the Vikings reached the area and junior cornerback Markiese Jones came up with a pass breakup while covering Williams to turn the ball over on downs.

Three plays later after a personal foul moved Jackson’s offense back 10 yards to its own 44-yard line, Welker hit a wide-open Kent for the 56-yard strike.

Welker scored two more points on the PAT to bring the Indians lead to 28-0 with 9:03 left in the third quarter.

The final touchdown of the night came on the second play of Jackson’s next drive, which was when Welker quickly got the ball to Kent on a screen pass.

The only thing between Kent and the endzone was four-star safety Williams, who Kent was able to juke and dashed to the endzone for a 65-yard score with 7:22 in the third to start the running clock.

With two games under his belt as the Indians starting quarterback, Welker said he feels good about his new role in replacing former all-state quarterback Cooper Callis.

“I got to watch him a lot last year, and he was a role model to me,” Welker said. “I learned a lot of things from him, so it feels good to come out here on Friday nights and do what he did.”

Jackson finished with a total of 159 rushing yards with sophomore Daniel Dickerson leading the way with 81 yards on 17 carries.

The Indians have now outscored opponents 77-7 as they scored five rushing touchdowns last week and five passing touchdowns this week.

“That gives us some balance for sure because with run-pass that’s great,” Eckley said. “We were a little heavier run-call wise tonight. Cael did an outstanding job of scrambling and keeping his eyes down field. Our receivers did a great job moving with him when he had to escape and got into open areas.”

Out of the Vikings total yards from scrimmage, 31 one of them came on the ground as Foster finished as their leading rusher with 19.

Helping lead the Indians defensive attack to stuff the run was sophomore inside linebacker Bryce Norman.

Norman finished with numerous tackles by meeting ball carriers at the line of scrimmage as well as chasing runners down in open space.

“We basically knew their whole offense coming into this game,” Norman said. “We come in and work hard week in and week out, and it’s just been a great experience for me and the other sophomores.”

One of Norman’s role models is former Indian Nathan Brown, who finished with a team-high 196 tackles to earn Class 5 All-State honors last season.

“Nathan did everything right,” Coach Eckley said. “He had a great attitude, and he was really outstanding as a senior and really set a high bar for the rest of the linebackers. I told our defensive coaches I thought Bryce could be maybe be as good as Nathan this year as a sophomore.

“Sometimes you get sophomores that are playing, and it’s really not that important to them yet. With these kids it’s really important. This is a priority for them.”