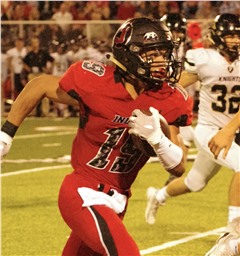 In front of the homecoming crowd on Sept. 28 at The Pit, the Jackson football team was able to claim its second SEMO Conference North Championship in the last three years by defeating Farmington 49-0.

This shutout was the second recorded by Jackson’s defense this season with the other coming in the team’s first home game against Parkway North, 35-0, on Aug. 31.

“I’m really proud of our kids, and I’m proud of our coaches,” Jackson Head Coach Brent Eckley said. “I’m proud for our community because we’re not isolated — the players and coaches — we’re not isolated. This is a whole team effort when you talk about Tribal Council and our administration. The players get the recognition on the field, but there’s a great support system on the field.”

On the field, the Indians gained 499 yards of total offense with a balanced attack between 258 passing yards and 241 rushing yards.

Sophomore quarterback Cael Welker accounted for four of the team’s seven touchdowns as two were through the air and the others on the ground.

Welker went 13-of-19 for 245 yards with no interceptions while gaining 73 yards on the ground on eight attempts.

Fellow sophomore running back Daniel Dickerson had a career night as he ran for a single-game high 141 yards on nine carries with two touchdowns.

“They knew that we passed a lot, so we knew we were going to have to run the ball coming into the game,” Welker said. “We executed the run really well, and it showed. It was a good job by our linemen in the run game.”

It only took 30 seconds for Jackson to open the flood gate as senior Reece Bright recovered an onside kick by senior Matt Jaco to start the game.

Dickerson gained 39 of his rushing yards on one run that he broke off for the first score of the game to give the Indians a 7-0 lead with 11 minutes, 30 seconds left in the first quarter.

Farmington runs the triple option, which is a run-heavy offense, and run the Knights did. Out of Farmington’s 47 plays, 45 of them were rushing attempts as junior running back Royce Harris carried the ball 13 times for 84 yards.

The Knights sophomore quarterback Kaden Files carried the ball 14 times for 17 yards as most of his carries came off quarterback sneaks directly into Jackson’s front seven.

“We were very prepared because they’ve stuffed it down our throat multiple years,” Sophomore inside linebacker Bryce Norman said. “We had an idea of what we were going to do. … Last year was really tough losing [the conference championship], and this year we came in and dominated.”

Meeting Files and Harris for a game-high 12 tackles was Norman, who also forced a fumble and had one tackle for a loss.

Three players tied for the second most tackles on Jackson with nine as senior defensive end Justin Singleton separated himself from the bunch with a game-high three tackles for a loss.

Most of Farmington’s runs in the first half were inside the tackles as the Knights started to run option pitches on the outside once they drew the Indians to the inside run.

“Our defense played great and they really played physical, and they played their assignments really well I thought, too,” Coach Eckley said. “I know we’ll face Hillsboro coming down the road, and that’s what we’re going to have to do because they’re an option based team as well.

“This is our second home game this year, and so far nobody has scored on us. Our defensive kids know they haven’t given up a point on this field yet.”

The Knights possessed the ball for a total of 30 minutes, 13 seconds to Jackson’s 16:19, which didn’t affect the Indians since they were able to find the endzone quickly on scoring drives.

Jackson’s next score came with less than four minutes remaining in the first quarter as Welker was able to score from two yards out after a Dickerson touchdown was called back.

The Indians scored three touchdowns in the second quarter to extend their lead over Farmington to 35-0 as Dickerson scored from five yards out and Welker broke off a 23-yard run for his second score of the night.

“With what I’m most proud of with those young guys is that so far we’re taking care of the football,” Coach Eckley said. “I think this is our second maybe third week in a row that we haven’t turned it over. We’ve talked to our guys about that if we don’t turn it over, we’re really tough to beat. Even if we punt it away, our defense is playing well enough that we’ve got a chance.”

The final touchdown of the half came after Jackson got the ball with 36.9 seconds remaining until halftime. Welker was able to find senior wide receiver Jordan Kent in the corner of the endzone to score with 11.2 seconds left in the second quarter.

“There’s just some critical situations where our guys are playing really smart and showing a really good football IQ,” Coach Eckley said. “We score at the end of the half, and that wasn’t play calling. That’s kids being smart and doing what they need to do.”

The second half started with a running clock, and it only took two plays once again for Jackson to find the endzone as it got the ball to start the third quarter.

This was when Welker hit Kent at the Indians own 49-yard line as the senior was able to elude and sprint past defenders for a 51-yard touchdown to give his team a 42-0 lead with 10:48 left in the third quarter.

“You can throw it anywhere around him, and he’ll just go catch it,” Welker said of Kent. “It feels really good to have a receiver like him.”

This was Kent’s final touchdown reception of the game, bringing his season total to 16, which makes his career total 53.

With this win, Jackson advances to 6-0 overall and are 3-0 in conference play. The Indians will now host Poplar Bluff (3-3, 1-2) this Friday.

Jackson has one more regular-season home game against Hillsboro (4-2) Oct. 12 before traveling to Parkway Central (2-4) Oct. 19.