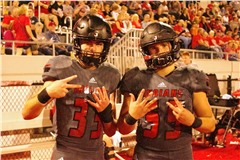 It took Jackson’s football team two games to finally defeat conference and district rival Poplar Bluff last year, but this year the Indians were able to make easy work of the Mules Friday at The Pit.

The Indians were able to do so as the kickoff team recovered back-to-back onside kicks booted by senior Matt Jaco.

“We did a great job calling kickoffs tonight, and there were a bunch of them,” Jackson Head Coach Brent Eckley said. “Our kids did a really nice job running down covering and going after the football. They were super aggressive, and that gives us a lot of confidence.”

“Dalton had a great night tonight, and I’m so proud of him,” Coach Eckley said. “He has pained over not catching the football, and he does extra work before and after practice. Jordan Kent has been working with him after practice, and it hasn’t been us coaches assigning it. It’s just been them doing it.”

Skrob also had what Coach Eckley called one of the team’s catches of the year when Welker found him near Jackson’s sideline in the second quarter. Skrob was able to drag his feet in bounds while leaning over the out-of-bounds marker to secure the grab for a first down.

The catch led to Welker scoring his sixth touchdown of the half when he ran the ball in from seven yards out with 3:22 left until halftime.

Welker finished 19-of-22 passing with 242 yards, six touchdowns and no interceptions while gaining 61 yards on the ground off four carries.

Waters finished with a game-high 74 yards on three receptions after failing to record a catch last week.

Kent had a total of nine touches on the ball in the game between receiving, rushing and returning but came up with three touchdowns. One of his touchdowns came on a 75-yard kick return.

Dickerson led the Indians in a balanced rushing attack with 71 yards on 14 attempts as sophomore running back Dimechi Herring paced him with 68 yards on six rushes.

The Indians lone touchdown in the first half came when senior running back Isaiah Johnson broke off a 48-yard run for the score to narrow Jackson’s lead to 14-7 with 9:42 left in the opening quarter.

In the district semifinal game last year, Johnson rushed for 228 yards on 28 carries with four touchdowns.

Johnson was leaned on in the game because Poplar Bluff was without its then starting quarterback, former Mule Logan Bell.

Taking over at quarterback this season has been junior Josiah Kilgore, who ran for negative two years on seven carries while completing two of his 10 attempts for five yards.

“We knew with a younger quarterback he just got thrown in there and it’d be rough for him to make decisions quick,” Jackson senior outside linebacker Tristen Koenig said. “We decided to bring pressure off the edge constantly all night, and it forced him to make some bad decisions and sometimes stuttered a bit.”

Johnson only finished with 34 more rushing yards in the game after his run of 48 yards while fellow senior running back Shemyron Townsend gained 113 yards and a touchdown on nine carries.

“I hate to say it was a defensive bust, but everybody is playing as a team — we’re not individuals,” Koenig said. “I think last year we had an issue with everybody just playing for themselves. We’re playing as a team, and we want to go far in November.”

One of the reasons why this defense is playing as an entire unit is because of the relationships these players have built off the field.

With defenders like sophomore outside linebacker Randol McDowell and sophomore inside linebacker Bryce Norman in their first year starting, Koenig said they have been around the program for years because their fathers are both coaches.

“We all know each other, and we’re actually friends outside of football,” Koenig said. “We hunt, fish — it doesn’t matter. It’s honestly a bond that really football hasn’t formed it’s just the friendship outside of football that’s formed. We’ve got each other’s back and can trust one another.”

Five Indians currently have double-digit tackles for a loss as McDowell leads the group at 17 followed by Norman with 13 while Koenig, Amelunke and senior defensive end Justin Singleton are all tied at 12 apiece.

Singleton also recorded one sack against the Mules to bring his season total to nine.

Jackson’s defense also came up with five pass deflections, which Koenig said is another big reason why this defense is so successful.

With just two games remaining for Jackson before the Class 5 District 1 Tournament, the Indians are on pace to do something only five teams in program history have done — go undefeated in the regular season.

“I honestly didn’t think we’d be here right now, and it feels really good that we are [undefeated],” Welker said. “Everyone doubted us before the season started, and now we’re sitting here at 7-0.”