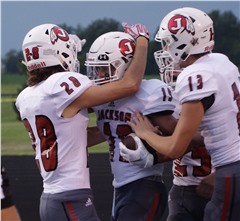 It only took 43 seconds for the Jackson football team (3-0) to score its first touchdown in a 49-7 win over SEMO Conference rival Cape Central (1-2) Friday, Sept. 7, at Tiger Stadium.

This was the 112th game in the crosstown rivalry between the two teams as the Indians managed to score 35-unanswered points before the end of the first half.

Leading the scoring charge was sophomore quarterback Cael Welker, who was a part of six of the seven scoring plays against the Tigers.

Five of those scores came through the air with the other being on a 1-yard run with under five minutes left in the opening quarter for Welker’s first rushing touchdown of the season.

The first came on a 30-yard play for Jackson to take the 7-0 lead with eleven minutes, 16 seconds left in the first quarter.

Defensively, Jackson has shut out opponents through 10 of the 12 quarters the team has played so far. The Indians have out scored opponents 126-14 in their first three games.

“Our defense was in the right spot — I didn’t think our offense played very clean, but we had a couple good plays early on and were able to score,” Jackson Head Coach Brent Eckley said. “We gained some confidence, but we made several errors through the first quarter and the second.”

Coach Eckley said one drive he was impressed with the most came in the final minutes of the second quarter when Welker hit Kent for their third and final score with 1:49 left in the first half.

The drive started with a 19-yard run from sophomore running back Daniel Dickerson, who later broke off a six-yard run to the Tigers 19-yard line.

The second big play of the drive came on a screen pass from Welker to sophomore wide receiver Ty Moran, who gained 23 yards on the play to put Jackson into scoring territory.

Dickerson failed to score a rushing touchdown in the game, but fellow running back junior Seth Waters did so with 5:43 left in the game to give the Indians their final lead of 49-7.

With under nine minutes to go in the half, sophomore running back Dimechi Herring took a dump pass from Welker for a 22-yard score to become the first Indian besides Kent to score a receiving touchdown.

Waters was the final Indian to come down with a touchdown grab in the game as he caught a pass heaved by Welker for 39 yards to give Jackson a 42-7 lead with 7:23 left in the third.

One of the starters on defense, senior defensive end Justin Singleton, attributed his unit’s success to the depth they have at each position and to the defensive coaches.

“All the coaches on our defense are constantly rotating guys in so they are not getting tired,” Singleton said. “I think that’s smart, and that’s why we’re all still fresh and hitting hard every play.”

Singleton was able to do more than just hit hard in his first start in this rivalry as the senior recorded three sacks, two tackles for a loss and recovered a fumble on top of nine tackles.

Something Singleton and the rest of the defense took advantage of early on were Central’s miscues as the ball was snapped high over junior quarterback Cameron Cox’s head several times.

Cox only managed to complete five of his 14 passing attempts for 58 yards, but he did find some success on the ground as he rushed for 40 yards and a touchdown on 22 carries.

Three other Indians besides Singleton were able to sack Cox with junior defensive end Cole Amelunke, senior outside linebacker Tristin Koenig and finally sophomore inside linebacker Bryce Norman taking down the passer as well.

“[Singleton] plays hard,” Coach Eckley said. “I don’t think we’ll see anybody all season long that will play harder than he does. He’s a physical kid, he’s a tough kid, and he’s a kid we share with the wrestling program. He loves his teammates and I’m really happy for him.”

Singleton’s sack total now stands at six heading into week four, which was the same amount former Indians Justin Crane and Ethan Laster tied for as the season-high in 2017.

Sophomore outside linebacker Randol McDowell finished as Jackson’s leading tackler for the second week in a row with 13 stops along with a team-high three tackles for a loss. McDowell is also the team’s overall leader in both categories with 41 tackles and seven tackles for a loss.

“It feels really good to trust in the defense,” Welker said. “We come off the field and we may not score, but we know the defense is going to go out there and [the opposing offense] isn’t going to score on them.”

With this win, the Indians have now defeated Central three years in a row, which is something that puts a smile on Singleton’s face.

“I haven’t lost to Cape in a football game yet because freshman year I wasn’t starting,” Singleton laughed.

The Indians are now 1-0 in SEMO Conference play along with their opponent this Friday in Sikeston (2-1), which is coming off a 34-0 route of the 2017 conference champions Poplar Bluff.

“I think we are still improving, and I think we still have a long ways to go,” Coach Eckley said. “I think we’re an OK team — I’m not going to say great. I know our numbers look good, but that will all shake out at the end of the season when we look at a full schedule.”

Eckley has been pleased with the work his players put in at practice to continue to improve, but he also said his team has been fortunate to have not suffered any major injuries.

Jackson’s win against Central also improved Eckley’s head coaching record to 150-52 overall through his 19 years as a head coach.