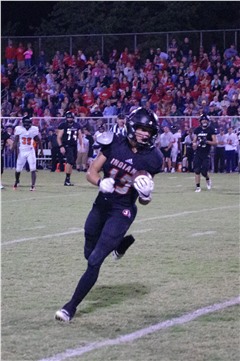 After losing to Poplar Bluff (7-0) by one point last week, the Jackson football team (5-2) used the loss as motivation to defeat crosstown rival Cape Central (4-3) 63-21 at The Pit.

Jackson senior quarterback Cooper Callis threw for 421 yards, five touchdowns and one interception on 41 attempts with 14 of his 27 completions going to junior wide receiver Jordan Kent.

Kent finished the game with 280 yards and three touchdowns on his 14 receptions after missing Jackson’s game against Farmington with a tweaked ankle.

Kent played against Poplar Bluff, but only caught four passes for 58 yards and no score while also fumbling for one of Jackson’s three turnovers in the game.

“Every day after practice I always have to use the ice bath or stretch my leg out and my ankle,” Kent said. “[Tonight’s win] feels great. We all came out together as a team and that’s what matters.”

Fellow wide receiver, senior Terrico Johnson, who had 336 yards and three touchdowns on 34 catches the past two games, caught six passes for 80 yards and a touchdown.

Callis said having Kent back to full health had a significant impact on the flow of the offense. Last week against Poplar Bluff, Callis said he did not know if he and Kent could have the same chemistry since Kent was not back to full speed.

“[Having Kent back] evens out everything from being able to throw to one side or throw to the outside receiver,” Callis said. “And then maybe throw to him on short routes to open up everything. It effects us so greatly.”

One route Callis continually threw to Kent was the wheel route, which is where a receiver runs a quick out pattern then turns upfield in a curved pattern.

Jackson head coach Brent Eckley said this year’s team is better at turning wheel routes into big plays because of his quarterback.

“We are a little bit better than what we have been in the past [on wheel routes] in the fact that the receivers now when they turn they don’t have to get on top to get a catch,” Coach Eckley said. “They just turn and look and Cooper is able to put the ball in the hole. It’s a good quarterback play, but it’s also receivers being aware of their space.”

This forced Cape Central to play more defenders in coverage, which then allowed Jackson to run the draw between Callis and senior running back Ethan Laster.

Laster carried the ball 22 times for 160 yards and two touchdowns while Callis gained 45 yards and scored a touchdown on 15 carries.

“It’s nice being able to run it a little bit because then it affords us the opportunity to take shots,” Eckley said. “If we can take vertical shots it makes their defensive backs chase, chase and chase. Before long we’ll get one and come back and run stretch, block them a little bit and then take a vertical shot.”

Being able to pass and run helps the rhythm of an offense like it did for Jackson, and this was not the case for Central as the Indians made the Tigers one dimensional on offense.

Central ran the ball 43 times for 274 yards versus Jackson 276 yards on the ground being led by senior running back/inside linebacker Aaron Harris with 197 yards and two touchdowns on 23 attempts.

The Tigers first-year starting quarterback, sophomore Cameron Cox, only threw the ball 10 times with one completion for 10 yards, zero touchdowns and a season-high four interceptions.

Picking off Cox three out of four times was Jackson senior cornerback Cole Welker, who now has career-high nine interceptions this season.

“I believe that we took advantage of their young quarterback because he doesn’t have much experience,” Welker said. “… My goal was to have one [interception] a game or to average one, but now I’m above that.”

Central runs a different offense than it did a year ago in the triple option from the spread formation, and the Tigers had success from this on their opening play when Cox pitched the ball to sophomore running back Dashawn Franklin for a 25-yard gain.

“We failed on option responsibilities there on that play, and then our guys responded and played clean the rest of the way,” Coach Eckley said. “The only thing we gave up after that was some of their power plays. They are heavy upfront, they got off the ball well and Harris runs really hard.”

Having the responsibility of containing the pitch man was junior Matthew Jaco, who came up with two tackles for a loss when Cox pitched to the outside runner.

Senior inside linebacker Nathan Brown led Jackson in tackles once again with 18 stops, and is now at a career-high 130 tackles on the year.

Jackson will host its final  game of the regular season this week against De Smet (0-7) and will then travel to play St. Louis University (3-4) before the start of district play.