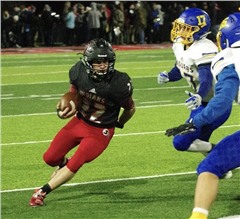 After the Jackson football team received a much needed week off with a bye in the first round of districts, most of the Indians starters only had to play one half in last week’s Class 5 District 1 Semifinal.

“I was pleased offensively that we were able to score on a limited number of plays because in the first half we had like 19 plays,” Jackson head coach Brent Eckley said. “It wasn’t a lot of yards because we had a short field, but our guys executed well.

“Defensively, I thought we played really well. We were really frustrated one of [the two] first downs we gave up in the first half. … It’s also great that our defense got another score tonight, so I’m pleased with that.”
With this win, Jackson will play in the district championship game for the third-straight year with hopes of winning the title for the second year in a row. The last time the Indians won districts back-to-back was in 2014.

Leading Jackson’s scoring attack against the Jaguars was senior running back Seth Waters as he scored three rushing touchdowns on seven carries with 98 yards. Waters only needs seven more rushing yards to eclipse 1,000 on the season, which is something no one would have expected entering the year.

“[Waters] did a nice job tonight — he ran real hard, cut well and plays hard every time he’s out there,” Coach Eckley said. “We’ve got a lot of trust in him taking care of the football and catching and running with it. We just didn’t have a whole lot of opportunities [to get him the ball] because we scored quickly, so there wasn’t really a lot of grinding or tempo. It is what it is.”

Waters took over as the Indians running back after juniors Daniel Dickerson and Dimechi Herring suffered torn ACLs in Week 2. Waters has played running back throughout his career, but he was one of Jackson’s starting receivers to start 2019.

“[Moving on to the district title game] is very special because we have a great group of guys — a bunch of hard workers,” Water said. “It’s always fun to be around them, and it’s very exciting. It’s been fun [being the running back], and it’s been an easy transition. I love it.”

“Those are my dudes,” Waters said. “We always joke around and stuff, but I’ve really become close with them this season. They’ve done a great job for me.”

Jackson’s offense was able to score quick and often in the first half in large part due to the team’s defense forcing Seckman to only have two first downs before halftime.

It only took four plays or less on the Indians first six drives to find the endzone, which is when Waters was able to record his three touchdowns. Jackson’s junior quarterback Cael Welker was able to find wide receivers senior Dalton Skrob and sophomore Kannen Turley for scores of 24 and 35 yards respectively.

Welker only had 12 passing attempts in the game for a total of 106 yards, but he did throw one interception before the end of the first half.

“[Welker] had good poise — he has always had really good presence in the pocket whether it’s starting to break down or not,” Eckley said. “We were frustrated on that one interception at the end of the first half, but he was just a hair late on [the throw]. We were also throwing it to Seth, and he runs the route just a little bit differently. They just missed each other.”

Skrob hauled in another touchdown reception before his night was over as backup quarterback sophomore Cameron Marchi hit the receiver on a screen pass for a 17-yard score.

The Indians allowed a total of 144 yards with 126 on the ground, but the Jaguars leading rusher was only able to net 30 yards. Seckman also did not score until the second half when Jackson’s starting defense was off the field.

Leading Jackson in tackles was none other than junior inside linebacker Bryce Norman, who finished with eight tackles.

Junior outside linebacker Randol McDowell paced Norman with seven stops of his own along with a sack. McDowell also recovered a fumble off a bad pitch for a 21-yard touchdown. This was McDowell’s second score of the year with his last coming off a similar play against Farmington.

Junior nose tackle Zane Lawrence-Collier recorded six tackles and one tackle for a loss while also being able to record a sack.

Another standout for Jackson was sophomore Ryler Styer, who produced five tackles and also blocked a punt and landed on the ball for a fumble recovery.

Coach Eckley was glad his team started the postseason sharp following the bye week, and he was also happy almost everyone was able to play.

“The guys that are starters are very competitive, and they want to play every snap,” Eckley said. “When you’re in this situation, it just doesn’t make sense to do it.”

Jackson will now play No. 2 seed Fox (8-2) for the second-straight year in the district championship game after defeating the Warriors 42-23 in last year’s title game.

“We’ve looked at [Fox], and they are a physical team just like they were last year,” Coach Eckley said. “They look quite the same offensive and defensively. They throw it just enough to make you honor it.”