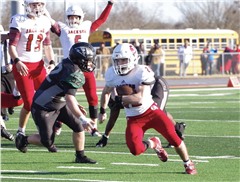 No player on the Jackson football team was alive the last time the Indians played for a state championship in 1995, but each one of them will be alive playing in state this Saturday at Faurot Field in Columbia.

Jackson (13-0) made the five-hour trip to face Staley (10-3) in Kansas City on Saturday afternoon, and the Indians came away with a 20-7 win after trailing 7-6 in three quarters of play at the North Kansas City District Football Stadium.

This was after Jackson’s punt team, which is the first-string offense, allowed Falcons senior running back Dermont Marshall to score his team’s lone touchdown of the game with 55-yard punt return in the third quarter.

The closest Staley’s offense came to scoring was at the beginning of the fourth quarter still leading Jackson 7-6, but junior quarterback Jehr Fowler was unable to hook up with junior fullback Joey Dearinger in the end-zone on fourth down.

“When we gave up the punt return and didn’t do anything on a couple of drives, we got the ball, and it was like, ‘We have to go,’” Jackson junior quarterback Cael Welker said. “I told the offense, ‘If you guys want to move on to next week, we have to score now, and we have to go.’”

The Indians did just that to take the lead on a three-play, 70-yard drive, where Welker was able to hook up with senior wide receiver Luke Starzinger for a 50-yard gain on a broken play.

“That was a scramble play, and that’s something we work on,” Jackson head coach Brent Eckley said. “It’s not drawn up and it’s nothing they can prepare for. The play just kind of broke down and that’s what Cael does really well at. He did a good job getting the ball up there, and Luke made a great play on it.”

Starzinger, who had missed the last two games of the regular season and all of the district playoffs, had one thought in his head when he saw the ball in the air coming his way, “Don’t drop it.”

“Scrambling out to my right, I didn’t see [Star-zinger],” Welker said. “Then I look down field, and he was wide open behind everybody, so that was a really good job of him getting open and being available.”

Starzinger indeed came up with the catch and then quickly turned around and headed to the endzone, but he was tackled at the 1-yard line and did not score. However, Starzinger’s catch-and-run set up a 1-yard touchdown run by Welker.

“Not a bit surprised [by Starzinger],” Coach Eckley said. “He’s a kid that’s just kept plugging away and kept going. I’m really happy for him that he’s able to get to the tail end of his career, and he’s able to have success and stay healthy right now.”

Welker and Starzinger hooked up once more on the next play for the two-point conversion for the Indians to take a 14-7 lead with 7:43 left in regulation.

“That was huge because our defense really stepped up this game, and the defense didn’t let them score, the offense did,” Starzinger said. “We felt like we had to make up for it and make a come back.”

This crucial pass play came in a game where the Indians offense only threw the ball 12 out of their 77 plays as Welker and senior running back Seth Waters combined for 61 carries, 232 yards and three touchdowns.

“They were a very physical defense, but going into the game we knew we were going to have to run the ball quite a bit, so that was the game plan going in,” Welker said. “I was prepared for it, but they were very physical. Watching film they were very blitz heavy, so we knew what was going to go on. When I see [the blitz], I just know where to go.”

Waters ran for a game-high 130 yards on 29 attempts, and the senior was able to score the final touchdown of the game with two minutes left in the fourth quarter.

Waters’ lone score came on his final carry on fourth down and 1 yard to go as Jackson only needed a first down to run the clock out since Staley was out of timeouts.

“Number one, we ran a play with a guy you always trust to have the ball in his hands, and that’s Seth,” Coach Eckley said. “Number two, you run it behind Connor [Tollison], and sometimes it comes down to maybe the numbers aren’t best, but we’re going behind players. We had the first down, but he made a couple of moves, and it was certainly a nice insurance touchdown.”

Jackson’s first touchdown was not scored until the offense’s fifth drive of the game after three punts and one turnover on downs. The Indians started their first scoring drive on Staley’s 47-yard line, thanks to junior outside linebacker Randol McDowell recovering a fumble.

Jackson ran the ball each time on the 10-play scoring drive that was capped off by a 1-yard touchdown run from Welker, who finished 6-for-12 passing the ball with 116 yards and no interceptions.

McDowell led Jackson with a total of 13 tackles, a career-high eight tackles for a loss along with one pass deflection. McDowell was paced by fellow junior inside linebacker Bryce Norman, who came away with 10 tackles, three tackles for a loss and an interception on Staley’s final offensive drive.

“[Staley] was big up front and had a lot of good fullbacks that filled the hole, but we came in and played our gaps to fill the hole,” Norman said. “… Turnovers are huge for us in any ballgame, and Coach Eckley talked about the offense taking care of the ball and if we forced more turnovers than the other team, we should really win the game.”

Jackson’s secondary also came up big against Staley since Fowler had 19 passing attempts, but he only managed to complete nine of those for 106 yards and was also picked off by senior safety Caleb Craft.

Craft was able to make the interception near the middle of the field after Norman was able to rush Fowler’s pass with a blitz.

“They had wide splits, so we ran a stunt upfront,” Norman said. “I got free to the quarterback untouched, so I thank my defensive lineman for that one.”

Craft finished third in tackles behind McDowell and Norman for Jackson, while also coming up with a tackle behind the line of scrimmage. Fellow senior defensive back Markiese Jones, one of the Indians starting cornerbacks, finished with a team-high three pass deflections along with three stops.

“We were outstanding [defensively],” Coach Eckley said. “Our kids played so hard — they’re so tough. They play to their ability, they’ve been coachable, and  I can’t say enough about our defense and how good they’ve been at preparing themselves.”

Craft’s interception came after Jackson’s first scoring drive, but on the second play in the ensuing drive, Welker’s pitch to Waters hit the turf and was recovered by senior Caleb Taylor. Place’s sack on the next drive forced Staley to punt the ball, which allowed the Indians to almost score once again before the end of the first half.

Jackson’s offense was able to get to Staley’s 2-yard line, but a chop block penalty called on the Indians offensive line pushed them back 10 yards. There were 25 seconds left on the play clock after the penalty on third-and-goal at the 12, so Jackson ran a passing play that fell incomplete as time expired.

“It’s a coaching error because in the end the clock was running, and we didn’t get it stopped,” Coach Eckley said. “We had timeouts to give that we could’ve called, and we didn’t do it. I didn’t realize the clock was running — I was looking at the call sheet. Cael saw something that he wanted to call, so we changed the play. … I screwed up on that because we should’ve gotten two plays there.”

Jackson will now face Carthage (11-2) for this year’s Class 5 State Championship, which neither school has ever won before.

The Indians have been to two state title games while this will be the first time the Tigers have played at state, who defeated Class 5 No. 1 media ranked Ft. Zumwalt North 20-17 to advance to Columbia.

Carthage’s two losses came against teams that also made it to the state championship game as the Tigers first fell to Joplin (13-1) 56-55, which lost to De Smet 35-20 in the Class 6 state title game on Saturday.

Carthage’s second loss was to Webb City (13-1), which will try to win its seventh Class 4 State Championship of this decade against Platte County (11-3) on Friday.