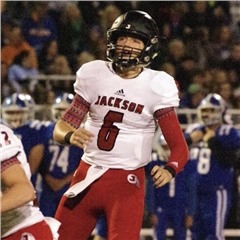 In the Jackson football team’s final road game of the regular season, the Indians recorded their fourth shutout of 2019 with a 56-0 win over Hillsboro to remain undefeated and advance to 8-0 overall.

Jackson’s offense scored on its first eight drives of the game as seven of the scores came in the first half as junior quarterback Cael Welker threw all five of his touchdown passes in quarters one and two.

Welker connected with three different receivers on his touchdown throws as senior wide receiver Dalton Skrob and junior wide receiver Rhet Liley each came down with two. Senior running back Seth Waters also came up with a touchdown reception for 57 yards.

“I thought our guys did a good job executing — I thought we were physical up front,” Jackson head coach Brent Eckley said. “Our receivers caught the ball well tonight and blocked well for each other. Overall offensively, it was a good night.”

Skrob led all receivers with 99 yards on three catches along with his two scores, and he was also the Indians leading rusher after breaking off a 75-yard touchdown run on the second play of the third quarter.

“On our last touchdown, we were really just trying to milk the clock because it was second-and-long,” Coach Eckley said. “[Skrob] ran it and just kept running — made his reads, got north and finished it, so good for him, but we were just trying to get first downs and move the ball. That’s what happens.”

Liley paced Skrob with a total of 86 yards receiving off four catches and his two scores. Liley came up with Jackson’s second-longest scoring play of the night with his 48-yard touchdown in the first quarter. Skrob’s longest touchdown reception was 47 yards.

“We were able to throw down the field a little bit, and the receivers did a really nice job finding the ball and just making plays,” Coach Eckley said.

These receivers needed to step up in absence of senior wideouts Luke Starzinger and Michael Schneider, who sat out of the game due to injuries they suffered against Poplar Bluff in Week 7.

Welker finished with a total of 275 yards passing and did not throw an interception while going 11-of-13 passing for a 84.6 completion percentage. He also scored the Indians first two touchdowns of the game off read-option runs.

The Indians offense was focused on going no huddle for most of the night since Coach Eckley prefers this because of the production that comes from it.

“I think it’s a lesson learned from the Farmington game — I don’t think we were near quick enough in that one tempo wise.”

In the first half, Jackson’s offense started all but two of its seven drives in Hillsboro territory as the starting defense did not allow the Hawks offense to get past the 50-yard line.

Junior inside linebacker Bryce Norman led the Indians in tackles once again with a total of 13 stops and also recorded one of Jackson’s five tackles for a loss.

Hillsboro gained a total of 154 yards of offense with 140 coming on the ground, but the Hawks did not manage to break the Indians streak of not allowing an opposing rusher to gain 100 rushing yards or more.

Hillsboro’s leading rusher was freshman running back Jaxin Patterson, who totaled 89 yards on 23 carries. Behind him was sophomore fullback John Bennett with 34 carries off 11 attempts.

“Defensively, we played really well and got short fields, so it made [scoring really easy],” Coach Eckley said. “I think we had 22 offensive plays in the first half and ended up with 49 points, so it was a good half.”

Jackson’s defense was without two starters in senior defensive end Bret Meyer and senior safety Grant Sides, who both hope to return this week in the regular-season finale against Parkway Central at The Pit.

Receiving more playing time because of these injuries were the likes of senior defensive end Isaiah Cougill, who recorded a career-high five tackles. Jackson sophomore Flint Guilliams also saw significant playing time in the secondary as he produced four stops.

Jackson played mostly backups in the second half due to being up by 56-0, which allowed second-string linebackers senior Braiden Wagganer and sophomore Jacob Farrow to combine for 15 tackles.

Another Indian continuing to make plays as a backup linebacker and specialist is sophomore Ryley Styer, who finished with four tackles and one stop behind the line of scrimmage.

Jackson’s offense finished with a total of 21 rushing attempts out of its 35 plays as Waters gained 49 yards on just seven carries. Freshman running back Tony Williams finished third for the Indians in rushing with 36 yards, which he gained on one run.

Jackson is now one win away from finishing the regular season undefeated for a second-straight year after outscoring opponents 452-81 before postseason play in 2018. The Indians have outscored teams 408-58 this season with one game left until the start of the Class 5 District 1 Tournament Nov. 8.

“[Finishing undefeated back-to-back] is a big deal — it’s not easy to do that once,” Coach Eckley said. “We’re playing the same teams we played last year, so they know who we are — we’re not an unknown entity. We know they’re getting their best game.”

The Indians final opponent before districts is Parkway Central (2-6), which they defeated last season handedly on the road 42-0. The Colts lost their first six games, but they have now won two-straight against Clayton (1-7) 42-7 and Parkway West (5-3) 41-28.