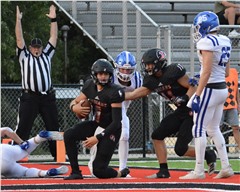 In the first game at The Pit this fall for the Jackson football team, the Indians certainly did not disappoint the home crowd as they defeated Hillsboro 55-14 on Senior Night last Friday.

Jackson’s offense was led by none other than senior quarterback Cael Welker as he accounted for five of his team’s eight scores with three touchdown passes and two more on the ground. With this type of production, players usually need an array of attempts and rushes, but Welker only needed 10.

Through the air, Welker finished 5-for-5 with 219 yards, along with his three touchdown throws. On the ground, Welker had five rushing attempts for five yards and two scores.

The Indians only needed a total of 13 plays to score their first six offensive touchdowns of the game.

“It was just kind of what their defense was doing,” Jackson head coach Brent Eckley said. “They weren’t trying to keep it in front, they were trying to force us to not be able to run the ball and to take shots. Then it’s like, ‘Well, we’ll go ahead and take the shots.’”

Three of Jackson’s scores were 40-plus yards as sophomore wide receiver Marquis Eckley came up with two of those plays himself. The first was the Indians first touchdown of the night for 60 yards as Welker was able to place the ball where only Eckley, who was tightly covered on the play, could make the catch on a wheel route.

Eckley’s final score of the night came on his second and last reception when Welker found him on a bubble screen Marquis broke off for a 42-yard score. This gave Jackson a 27-0 lead over the Hawks with 20 seconds left in the first quarter.

“Cael did a really good job delivering the ball accurately,” Coach Eckley said. “We blocked pretty well on screens tonight, and I thought Marquis made a nice play on the first touchdown, where he went up and got it. The [cover man] was in his face a little bit, but he was able to snatch it and finish the play.”

Through the first two starts of his high school career, Eckley has recorded six catches for 170 yards and five touchdowns.

Also coming up with only two receptions in the game was the Indians leading receiver from last season in junior Kannen Turley. Turley recorded the biggest play of the night with a 66-yard touchdown reception off the bubble screen, and he has now caught six passes for 211 yards and four scores.

“[Turley and Marquis Eckley] have a chance to be really special,” Coach Eckley said. “So far, we have to continue to work on some of the little things — the blocking and angles and releases. They both do a great job going up and getting the ball, and they do a good job making cuts in the open field and getting open.”

Turley’s lone touchdown of the game came after Welker was brought down for a sack after a blocking assignment was missed. Welker was sacked once earlier in the game, but overall Coach Eckley was pleased with the play of his offensive line.

“One sack was on [Welker] — it was a heavy box, and he should’ve just thrown it away,” Eckley said. “We just had busted protection on the other one, but we’re learning, and so we’ll take it. [Scoring after the sack], our quarterback executed very well and the lineman went out and blocked on the play.”

Out of 35 plays on offense, Jackson ran the ball 27 times and only picked up 61 yards on the ground. Leading the attack was senior running back Daniel Dickerson, who wracked up 25 yards and two touchdowns on six carries.

Having the most rushing attempts for Jackson was sophomore running back Tony Williams with eight as he gained 21 yards and did not score.

Partly why the Indians had such a quick and successful night on offense was the play of their defense. The unit recorded multiple three-and-outs, recovered three fumbles, blocked two punts, recorded one interception and scored one touchdown.

Scoring the defensive touchdown for Jackson was sophomore defensive end Tony Terry, who did so after blocking Hillsboro’s punt in the second quarter and landing on the ball in the endzone. This was the defense’s first score of the season, which gave the Indians a 42-0 lead.

“About two weeks ago, Terry had an average week of practice,” Coach Eckley said. “Then last week, he had a good week of practice and this week it was better. I feel like he’s getting close to really making a huge breakthrough on a Friday night. He continues to improve with the way he’s practicing, so I’m hoping he’ll look at it and say, ‘Hey, I practiced well and I played better.’”

Jackson junior cornerback Blake Blackman recorded his team’s lone interception of the game in the first half. Blackman nearly had another interception during Hillsboro’s first possession, but he was ruled out of bounds when he made the catch. This still resulted in the Hawks turning the ball over and leading to a Jackson touchdown.

“I was about to move back to safety this year and got moved back to corner,” Blackman said. “[I practice wide receiver as well], so I know what guys are doing when they’re doing it. I’m able to read the offense more.”

Also coming up with turnovers were players like senior outside linebacker Garner Horman and senior defensive end Chase Gray. Horman also recorded a sack in the game.

Jackson’s defense allowed a total of 235 yards of offense as Hillsboro ran the ball 47 times for 128 yards — most of which came against the Indians second-string defense. The Indians defense led by senior inside linebackers Bryce Norman and Randol McDowell has only allowed one score in the first half this season.

Hillsboro’s two touchdowns of the game came with under three minutes left in regulation on two, short-yardage runs that only equaled a total of six yards.

Jackson (2-0) will now host a second game in a row by taking on SEMO Conference opponent Poplar Bluff (2-0) this Friday night.