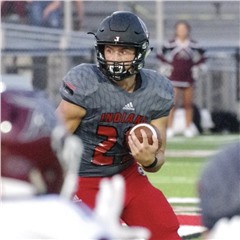 For Homecoming at The Pit, Jackson (3-0, 1-0 SEMO) handed Poplar Bluff (2-1, 0-1) its first loss of the season by blowing out the Mules 56-7. The Indians did so with a balanced offensive attack, while their defense forced two turnovers and four three-and-outs.

“The last couple of weeks, the teams that we’ve played have made us one dimensional,” Jackson head coach Brent Eckley said. “We’ve had short plays of drives — it’s like we were getting a one-play drive or two-play drive, so we were thankful for what we got tonight.

“The defense was a little bit more diverse, and we had some opportunities to run it a little bit more from what they were trying to take away. We were able to put some drives together, which I love because in games like that you get six, seven or eight plays, it makes it tough for the defense to play hard that many snaps in a row.”

Jackson’s offense recorded a total of 461 yards [47 plays from scrimmage] with 247 coming on the ground as senior running back Daniel Dickerson had his best performance of the young season by rushing for a game-high 92 yards and three touchdowns on 11 carries.

Finishing behind Dickerson for the most rushing yards was his partner in the backfield sophomore running back Tony Williams. Williams recorded a career-high 90 rushing yards and scored his first touchdown of the season with 10 attempts.

“First off, our line blocked great tonight. Both Tony and I were talking about it all week that we were going to ball,” Dickerson said. “We were limited the past two weeks, so we were like, ‘Hey, we’re coming in, and we’re going to pound the ball.’ That’s what we did.”

Dickerson recorded his first touchdown of his senior campaign last week as he recorded two in Jackson’s 55-14 win over Hillsboro.

Dickerson is coming off a junior campaign where he tore his ACL, and he also suffered a minor injury during summer workouts. However, the former all-state running back said he’s now 110%.

“I was happy with one touchdown last week coming back off [tearing my ACL],” Dickerson said. “It was emotional for me having two [touchdowns last week] then three [against Poplar Bluff]. It feels awesome.”

“There were some spots in there where [our offensive line] played with outstanding effort,” Eckley said. “They were physical, and we’ll look at it a little bit more, but there were some times when they got off the football and really played hard.”

Without being sacked, Welker completed 10 of his 13 passing attempts (76.9 completion percentage) for 200 yards even and four touchdowns while not throwing an interception. No defense has been able to pick off Welker yet this year as he has now thrown 13 touchdowns on 26 completions.

Leading Jackson in receiving and scoring his first touchdown of 2020 was senior wide receiver Rhet Liley, who hauled in four passes for 65 yards and one touchdown. Pacing him were fellow wide receivers junior Kannen Turley and sophomore Marquis Eckley, who combined for five catches, 121 yards and three touchdown grabs.

“Cael makes really great decisions, and if he’s unclear a lot of times he’ll check with me, and we’ll look at it from up top and see where we have the best leverage to take a shot,” Eckley said. “He’s just so savvy and smart. I like that he’s finding guys and is comfortable. Ty Moran didn’t get a lot of touches tonight, but we can count on him. He’s a good receiver and the other guys got explosive plays, so it is what it is.”

Jackson’s defense only allowed Poplar Bluff to 172 yards of total offense as the Mules gained 139 through the air and only mustered 33 running the ball. Leading Poplar Bluff’s passing game was junior quarterback Kannon Carr, who went 10-of-21 (47.6%) with 139 yards and one touchdown, but he did throw two interceptions and almost had a third if it wasn’t for a penalty on Jackson.

The Mules lone score came with under eight minutes to go in the first half as Carr hooked up with junior wide receiver Jacob Baller for a 31-yard touchdown on a screen pass. Baller finished with 66 yards on four catches.

Baller’s touchdown catch narrowed the Indians lead to 28-7, which became 42-7 at halftime after Welker hit Liley for a 20-yard score and Dickerson walked into the endzone with a 1-yard carry.

Poplar Bluff’s leading rusher was senior running back Gavyn Hays as he only gained 42 yards on a game-high 14 rushes. Carr finished with negative 15 yards as he was sacked by Jackson’s defense three times.

“Our defense was very physical,” Eckley said. “Tony Terry played very well again tonight — he’s taken another step. All of the defensive lineman played well, and that sets things up for the linebackers. Our linebackers were outstanding, physical and downhill.

“I thought our secondary was a little bit behind tonight. I didn’t think we played quite as well, but I think we’re going to play better. I mean they’re competitive kids, and they want to be great, so they’ll keep plugging and getting there. It’ll get better.”

Recording interceptions for the Indians on defense was Homecoming King senior cornerback Dimechi Herring and junior safety Flint Guilliams. Jackson’s offense turned both of these picks into touchdowns.

The Indians will now face crosstown rival and SEMO Conference foe Cape Central (1-1) on the road, which is coming off a 47-20 loss on the road to Hillsboro.