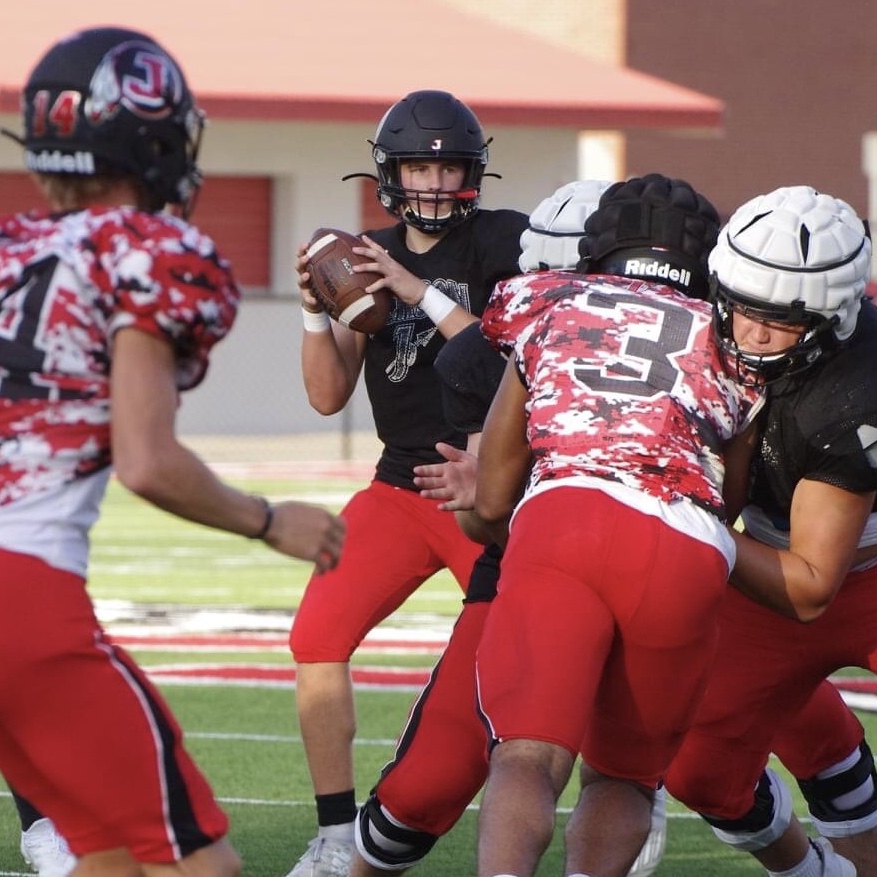 After having a perfect season and winning its first-ever state championship last fall, the Jackson football team stepped foot back on the gridiron to compete in its annual Gatorade Game on Saturday.

The Jackson faithful also got a taste of what the first-year starters will bring to the table like senior quarterback Cameron Marchi, who is taking over for one of the most decorated quarterbacks in Missouri high school football history — 2021 graduate Cael Welker.

Not only did Welker lead the Indians to their first state title in program history last season, but he was named the 2020 Class 5 Offensive Player of the Year on top of garnering all-state honors for the third and final time. He was also honored by USA Today as the best offensive football player in Missouri.

Marchi didn’t have the best start Saturday as he had a pass deflected by junior defensive end Tony Terry on the second play of the opening offensive drive. Three plays later, Marchi was picked off by first-year starting safety sophomore Gavin Guilliams.

Terry eventually forced Jackson’s offense to double and sometimes even triple-team block him after he was able to disrupt play-after-play during the first series. Terry proved that he will be a nightmare for opposing offenses this season as he finished with two sacks and made several tackles for a loss and deflections on Saturday.

Later on in the drive, however, Marchi found his groove and hooked up with Turley for a 40-yard gain and also found sophomore wide receiver Trent Boxdorfer for another first down. Boxdorfer had a 80-yard touchdown later in the drive off a pass from junior quarterback Zach Calder.

On the next series where the first-string offense took back over, Marchi recorded an 80-yard touchdown pass of his own to Turley. Another top receiving option for Marchi this season will be junior wide receiver Isaiah Davis, who hauled in a 80-yard touchdown catch of his own from sophomore quarterback John-Paul Sauer.

Later in the game, Marchi hooked up with Davis for what would’ve been a 52-yard touchdown, but the play was called off due to a holding penalty.

Running behind that offensive line will be junior running back Tony Williams, who had multiple 10-plus yard runs and scored a touchdown Saturday. As a sophomore, the bulldozer of a running back tallied 746 yards and 12 touchdowns on 113 carries behind two-time all-state running back and 2021 graduate Daniel Dickerson.

Pairing with Williams in the backfield will be sophomore running back Jason Goodman, who Jackson head coach Brent Eckley said reminds him of 2020 graduate Seth Waters. As a senior, the dual-threat, all-state running back helped the Indians finish as the Class 5 runner-ups.

Moving back to defense, returning as starters on defense along with Terry and Guilliams will be the likes of senior cornerback Blake Blackman, senior outside linebacker Ryley Styer and senior defensive end Mark Brakhane. Blackman, who received an offer from Missouri Baptist this offseason, recorded a team-high five interceptions last season as Guilliams paced him with four picks of his own.

Styer will be crucial to Jackson’s defensive front seven since he returns as the Indians leader in tackles for a loss from 2020, where he produced 15 stops in the backfield. He also wracked up 56 tackles, 10 quarterback hurries, four forced fumbles, three blocked punts, two fumble recoveries, two interceptions and sacked the quarterback twice.

Tasked with replacing current Division-I inside linebackers Bryce Norman and Randol McDowell of SEMO is senior Jacob Farrow and junior Griffin Horman. Both players were able to rush the quarterback and make several stops Saturday as Farrow even came up with a sack.

The Indians will now compete in a jamboree this Friday at Festus to prepare for their season-opener against Roosevelt Aug. 27 at The Pit.