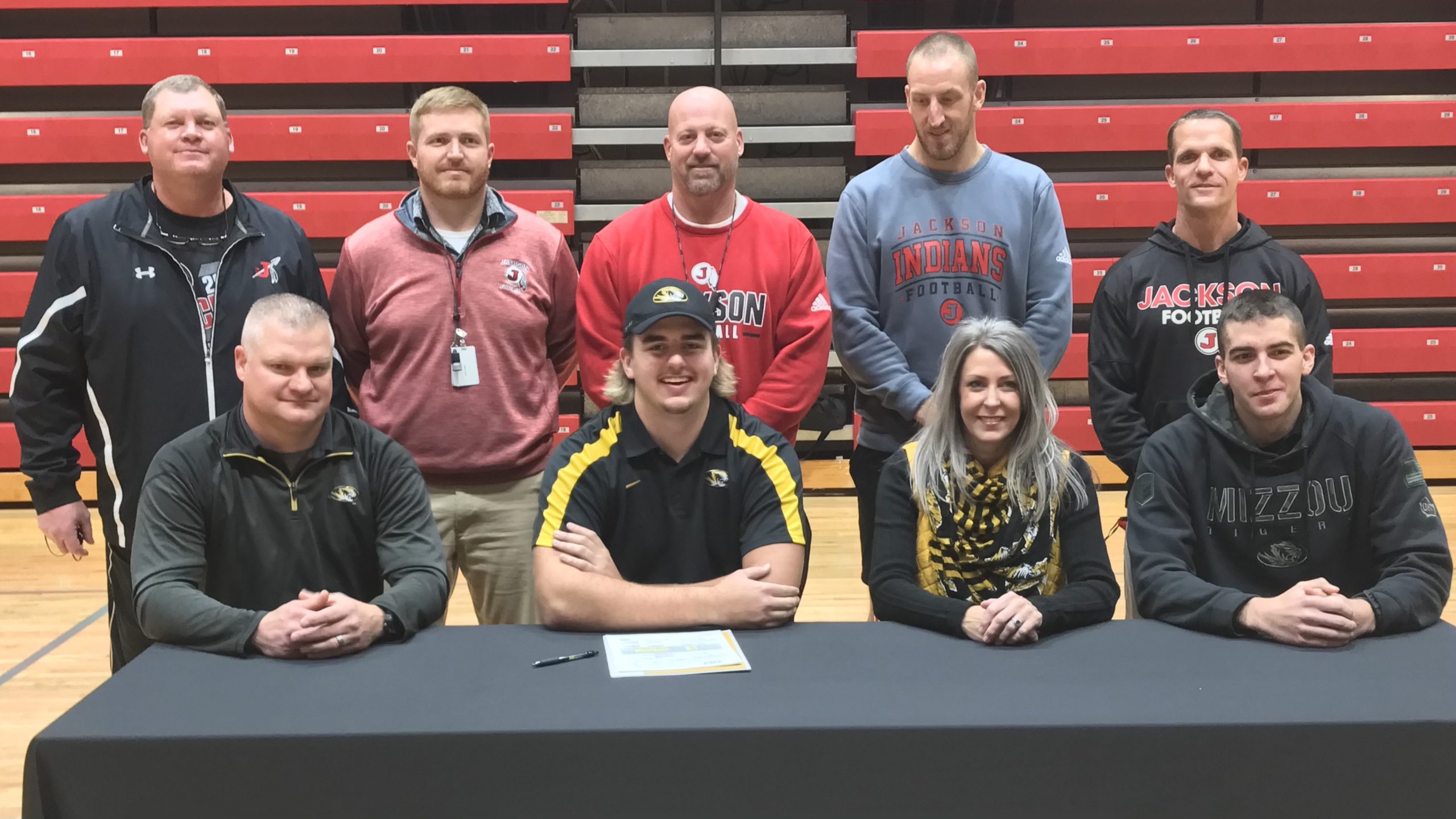 On the same day Jackson senior Connor Tollison was named the best football player in Southeast Missouri by being the recipient of the Carr Trophy (established in 1979), he fulfilled his dream of being a Division-I football player by signing with the University of Missouri.

Tollison had an array of Division-I schools to choose from as national powerhouses like Alabama and Oklahoma offered him as well. However, Tollison said picking Mizzou over all the other schools was “pretty easy in the end” after visiting the campus a few times.

Of course, growing up in Missouri and being a football fan, Tollison has always been fond of the Tigers, but he also wanted to branch out his fanhood every now and then.

“Growing up I was like, ‘Everybody roots for the Kansas City Chiefs and the Missouri Tigers,’ so for a while I rooted for Florida State, and I’ve always been a Green Bay Packers fan,” Tollison said. “But Missouri was always a school I was interested in.”

Aside from Mizzou being the in-state school and having enjoyed his visits on campus, Tollison said the main reason why he signed with the program is because of the team’s coaching staff led by head coach Eliah Drinkwitz. Drinkwitz was hired by Mizzou last December after leading Appalachian State to win the 2019 Sun Belt Conference Championship.

Tollison explained that Drinkwitz and his staff are knowledgeable about the game, care about their players and are always trying to improve as coaches.

“Not a lot of guys wanted to take the Missouri job, and Coach Drink had a lot of success where he was and could’ve stayed,” Tollison said. “I thought it was courageous of him to take the job. I like him, and he likes me, so it was a good fit.”

In Drinkwitz first season at the helm, the Tigers finished with a record of 5-5 in the Southeastern Conference and will play No. 15 ranked Iowa in Music City Bowl next week. Before losing its last two games of the regular season, Mizzou was ranked in the College Football Playoff rankings for the first-time ever at No. 25.

“Some people only thought Mizzou would win two games this year,” Tollison said. “After we get a bowl game and if we win that, I feel like that’d be crazy for where people thought we’d be compared to where we are now.”

Just like Mizzou, Jackson’s football team was also underrated this year as the Indians finished the regular season as the No. 3 ranked team in Class 5. As we all know now, Jackson not only ended 2020 as the No. 1 team in Class 5 but also the entire state after winning its first state championship in history.

Starting at left tackle for the fourth year in a row, Tollison led an offensive line that allowed the unit to average 55.6 points per game this fall. The Indians defeated every team in the playoffs by at least 35 points as they beat Platte County 42-7 for the Class 5 state title.

Jackson has finished with an overall record of 46-5 the last four seasons with Tollison on the offensive line while winning three SEMO Conference Championships, three Class 5 District 1 Championships and making back-to-back state championship appearances. One of the reasons why the Indians had so much success with Tollison is the same thing Jackson head coach Brent Eckley would tell recruiters: “Connor wins.”

“When it’s Friday night and he has a job to do — if it’s to reach the guy, if it’s to pass block the guy or whatever he’s supposed to do when he’s competing against a guy — he’s won play in and play out for four years,” Coach Eckley said. “We didn’t have to worry about, ‘We’re going to get pressure off this side because we don’t know if we can win that matchup.’ When we want to run stretch left, we’re running stretch left. It doesn’t matter if the defense knows or not — you could tell them — he’s still going to get the block.”

When asked about how Tollison has grown into the 6-foot-5, 300-pound man he is today, Coach Eckley laughed and thought about a picture he has of Tollison from the spring of his eighth grade year when he didn’t even weigh 200 pounds. Eckley recalled that Tollison was still about 6-4, so he’s been mostly impressed by the focus Connor has displayed in order to gain weight.

“You think of him at the beginning as such a boy and athletic, he’s just worked, worked and worked to gain weight,” Coach Eckley said. “He’s put on 100 pounds and has been able to increase or improve his movement when we run a 40-yard dash or have him do a vertical jump. He’s gotten better [in those drills] even though he’s added weight.”

While starting as a freshman, Tollison admitted there were a few games he was nervous about playing in because the defensive lineman he would face were bigger than he was at the time. However, Tollison said it taught him how to compete and fight every single play early on.

One of the ways Tollison has always been able to hold his own against defenders is because of his athleticism, which made pass blocking always come easy to him. This came in handy during the 2017 season since he was blocking for former Jackson quarterback Cooper Callis in what Tollison described as a pass-heavy offense.

Tollison protected the 2020 Class 5 Offensive Player of the Year and three-time, first team all-state quarterback Cael Welker’s blindside for the last three seasons. With Welker taking the snaps, Tollison said the offense has been more balanced, which made him focus on becoming a better run blocker.

“From last year to this year, I really improved my dominance in run blocking,” Tollison said. “Pass blocking always came pretty natural to me, but run blocking wasn’t always easy at first not being super heavy. Now with having good weight room strength and being a bigger guy, I really wanted to show my dominance in the run game this year.”

Tollison credits Coach Eckley for becoming arguably the best offensive lineman in the state of Missouri because Eckley taught him to never settle. Not only does Eckley stress his players to spend a lot of time in the weight room, but he also wants them to create goals, match those goals and then create new ones.

“I never tried to be happy with where I am,” Tollison said. “I’d go to camps, and I’d beat some kids and get beat. I was like, ‘All right, next time I go to a camp I want to beat those kids.’ I just tried to work hard in the weight room and off the field. Then having to eat a lot, too, to gain some weight. You can’t play lineman being a small guy, so having to progress from 200 pounds to 300 now took a lot of hard work in the offseason.”

Tollison is enrolling at Mizzou early and will officially be moving onto campus Jan. 16, and he is simply excited to play in what he calls “the best conference” in college football — the SEC.

“I’ll be playing guys that are just as good or better than I am, so it’ll be good having to try and find ways to beat them,” Tollison said.