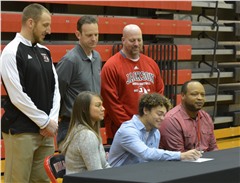 Jackson senior Jordan Kent accomplished one of his lifelong dreams last week by signing a national letter of intent to continue his football career at the college level.

Kent had received offers from Lindenwood and Southeast Missouri State prior to his record-breaking senior season, but he ultimately decided to ink the dotted line with Ellsworth Community College located in Iowa.

“I know that it’s far away from here — Iowa — seven and a half hours,” Kent said. “It’s just a journey that I have to take, and hopefully it will lead on to something I want to become when I get older.”

The coaching staff from Ellsworth visited Jackson at the beginning of the year, which led Kent to take an official visit. After arrival, Kent said he knew it was the school for him.

Kent said it was a great feeling to sign the piece of paper guaranteeing the continuation of his football career, especially after having surgery on his ACL following the season.

On the opening kickoff of the Class 5 Quarterfinal against Vianney on the road, Kent received the ball but went to the ground after awkwardly planting on his knee. He didn’t return to the game.

“[The recovery] has been going well,” Kent said. “My therapist said it’s been healing faster than she’s ever seen.”

Heading into college, Kent will be hitting the weight room to bulk up, while he will also work on running routes and catching passes from quarterbacks over the summer whenever he is back to being 100 percent.

One of Kent’s former quarterbacks and 2018 Jackson graduate Cooper Callis also decided to take the junior college route by signing with Pearl River Community College in Mississippi. Callis is now back in the midwest after signing with the University of Southern Illinois — Carbondale.

This past season, Kent recorded a career and program, single-season record 1,498 yards and 28 touchdowns receiving on 76 catches. This put his career totals at 202 receptions, 3,591 yards and the second-most career receiving touchdowns in Missouri history at 65.

Kent hauled in a career-high 81 passes for 1,307 yards and 24 touchdowns as a junior and came up with 45 grabs for 786 yards and a team-high 13 touchdowns as a part of the Kent Brothers duo his sophomore year.

“I told my brother [Quentin] the first year I played with him that I’m going to try to break the touchdown record, and that’s what I did,” Kent said. “I think I left a good mark [here at Jackson]. A lot of kids looked up to me, and I feel like I led by example to show them the way.”

Having seen all of his catches, yards and touchdowns was none other than his mother Tonya Heisserer, who Kent is certainly going to miss while off at Ellsworth.

“[Playing college football] is going to come with a lot of responsibilities,” Kent said. “I know it hurts my mom because she can’t come see my games because it’s so far away. But it’s going to be good.”

Also having seen every snap of Kent’s high school football career was Jackson head coach Brent Eckley, who has regarded Kent as the most athletic player in his program for the past three seasons.

In the span, the Indians have recorded an overall record of 27-7 overall, while winning two SEMO Conference Championships and a Class 5 District 1 Championship this past season as Jackson finished 11-1.

“I thought he made really big strides from his junior year to his senior year, and he played much more physically and took care of the ball better,” Coach Eckley said. “He’s just more mature on the field [now] and runs better routes — he was just a guy we could count on.

“He had such a great junior year scoring [24] touchdowns that teams were always aware of where he was. He was still able to make plays even though the defense was kind of focused on him a little bit.”

Kent was named to the Class 5 All-State first team this year after being named third team all-state as a junior. He was also named this year’s SEMO North Offensive Player of the Year and finishes his career as a three-time all-conference selection.

Coach Eckley and the rest of Jackson’s offensive staff could put Kent anywhere by himself, and they knew the opposing defense would double-cover him, which created “so many more opportunities” for the Indians.

Other units Kent made plays for his senior year was on the kickoff and punt return teams, where he scored two touchdowns and recorded 405 all-purpose yards on a total of 22 returns. This is another aspect where Eckley believes Kent can contribute for a college program right off the bat.

“He had a couple of really huge plays on kickoff returns [this season],” Eckley said. “That wasn’t an area he was really pushing towards when he was a junior, but when he was a senior he wanted to be on the field, and he wanted to make plays.”

At Ellsworth, Kent is just a little over an hour away from schools like Iowa State out of the Big 12 Conference and Northern Iowa. He is also over two hours away from the Big Ten Conference’s Iowa.

“Academically, [junior college] is an opportunity to work on grades and get what he needs to be able to make better decisions playing at a four-year school,” Coach Eckley said. “… He’s a kid who can also play defensive back as a corner, or depending on how he matures, he’s a kid that could play safety as well. He’s still got a lot of room to grow and develop physically, so there’s a lot of things I think he can do.”