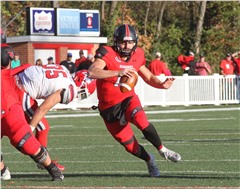 The Southeast Missouri State’s football team’s first FCS playoff win in program history wasn’t as easy as the final score of 28-14 looked. The game happened to be a tale of two halves.

In the first half at Houck Field, No. 16 ranked Stony Brook shutout the No. 20 Redhawks by going up 14-0 as senior quarterback Joe Carbone connected with senior wide receiver Julius Wingate six times for 128 yards and a touchdown.

The Seawolves entered the game with plenty of experience versus top 25 teams, having played five of them and went 3-2 overall in those matchups.

Southeast had only played one top 25 opponent before the first round of the FCS Playoffs in Jacksonville State, which was ranked No. 4 when the Redhawks came away with a 37-14 home win.

One of the keys to Southeast upsetting Jacksonville State was the defense creating turnovers and turning them into points. The unit continued that trend Saturday afternoon.

The Redhawks offense failed to convert a third down in the first half and finished 1-of-12 in the game. Southeast also only had 103 total yards from scrimmage entering halftime.

“I told [my team] at halftime that this is the most important moment in program history,” Redhawks Head Coach Tom Matukewicz said. “We’re all feeling good about ourselves with us hosting, and all of the sudden we got punched in the face.

“I loved how our football team responded. You’ve got two choices — you can keep getting punched in the face or you can swing back.”

That swing came in the form of a tipped pass by senior defensive end Clarence Thornton as the ball then went into the hands of junior outside linebacker Justin Swift for an interception.

The Redhawks defense held Wingate to only two more receptions in the game as junior defensive back Taj Jenkins, who usually lines up at safety, covered Wingate for most of the second half.

In the first half, Jenkins came up with a pass deflections on third down to bring two Stony Brook drives to an end.

On the Seawolves ensuing drive after Santacaterina’s touchdown run, Jenkins made a diving interception as Carbone attempted to hook up with Wingate on a curl route.

This put Southeast’s offense in Stony Brook territory once again as Santacaterina was able to find junior wide receiver Kristian Wilkerson for a 5-yard touchdown to tie the game at 14-all with 10:06 left in the third quarter.

The Redhawks were able to force the Seawolves into a three-and-out situation on the next drive as Stony Brook then moved Southeast’s offense inside the redzone off penalties.

Santacaterina threw his second touchdown of the day to capitalize. Junior wide receiver Jerrick Orr, who dropped a pass in the endzone on the last drive, gave his team a 21-14 lead by hauling in a 9-yard touchdown throw.

Southeast punted the ball on its next drive, but sophomore punter Jake Reynolds was able to have the ball bounce off a Stony Brook player for the Redhawks to recover a muffed punt.

It only took one play for Southeast to take a two-touchdown lead following the turnover as Santacaterina hooked up with Wilkerson once more on a 38-yard play.

To make things worse for Stony Brook, Carbone went down with a shoulder injury after Thornton brought him down for a six-yard sack.

Southeast held on to the lead for the team’s first-ever postseason win and also advanced to 9-3, which ties for the most wins in program history. Junior inside linebacker Zach Hall set a program record of his own for most tackles in a single season, now standing at 163.

“I’m humbled to be the head football coach here, and I’m very thankful,” Coach Matukewicz said. “I hope everyone that’s played for us here takes this and owns a piece of this win. I hope this community and university takes a piece of this and are proud of what this football program accomplished.”

The Redhawks will now face No. 4 ranked Weber State (9-2) in the second round of the FCS playoffs in Ogden, Utah, this Saturday.

Weber State lost to Utah 41-10 to start the season and later in week five to Northern Arizona at 28-24. They have defeated three ranked teams.