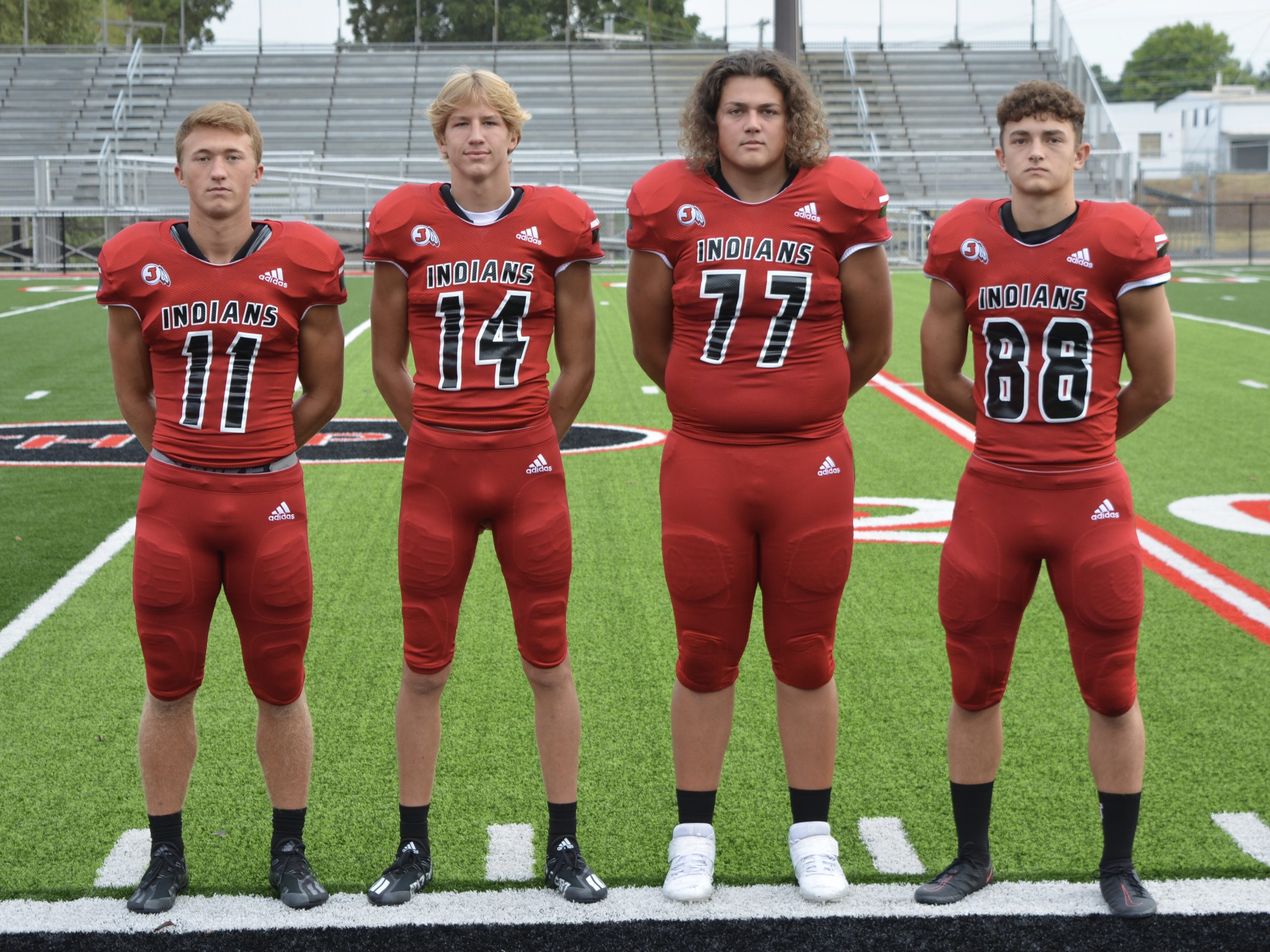 Last fall, the fourth time was the charm for Jackson’s football team as the Indians won their first-ever state championship in commanding fashion with a 35-point, 42-7 win over Platte County in the Class 5 state final. Jackson had played in the state title game three times before including in 2019 when it fell to Carthage, 27-21, in overtime.

The 14-0 Indians also won each game by at least 24 points and ended up with 10 players being named to one of the three Class 5 All-State teams. Two of those players in 2020 graduates quarterback Cael Welker and inside linebacker Bryce Norman were named the Class 5 Offensive and Defensive Player of the Year, respectively.

Welker was also recognized by USA Today as the top offensive football player in the state of Missouri for the 2020 season.

Other all-staters who graduated from last year’s state championship team include left tackle Connor Tollison, who now plays football at Mizzou, running back Daniel Dickerson, tight end Rhet Liley and inside linebacker Randol McDowell. Norman and McDowell are playing together at Southeast Missouri State, while Dickerson plays for Dordt and Liley at Missouri S&T.

Even though he didn’t garner all-state accolades, 2020 graduate cornerback Dimechi Herring is playing college football as well now at Quincy. He was still a SEMO All-Conference and all-district selection, though.

Three other graduates also earned all-conference and all-district in outside linebacker Garner Horman, center Thomas Ruch and nose tackle Zane Lawrence-Collier. None of these three are playing college football, but Horman is continuing his career on the wrestling mat at William Jewell. He was a three-time all-state medalist for the Indians wrestling team (sixth in program history to do so).

“It’s going to be stupid for us to compare ourselves to last year’s team, and like everybody is going to do it,” Jackson head coach Brent Eckley said. “It’s not fair because we’re talking about a group that as a team all of those pieces came together at the same time.

“It just doesn’t happen, so we don’t have all of that talent again. Nobody has that in Class 5 because it was just a special group. We can’t compare ourselves to last year even though everybody is going to.

“The things I’m looking for is that we want our kids to play hard consistently, so we should play with great effort and great confidence. We want them to continue to come together as a team because we’ll need that more this year. There’s a better chance of there being closer games this year than last year, so we’ll need to pull together and all play together on the same page.”

Even though most of those key positions will be filled by first-year starters, Jackson still brings back four all-staters as well as numerous all-conference and all-district selections from its perfect season. The four returners who made the all-state team last fall are seniors Ashton Flinn, who will take over at left tackle, wide receiver Kannen Turley, safety Flint Guilliams and kicker Logan Bruns.

Another returning starter on the offensive line will be senior Liam Bryant at right guard, who has started for the Indians the last two years. Just like Raines, Bryant was also an all-conference and all-district selection last fall.

“Flinn is really good. He’s playing fast, confident, and he’s being a good leader and coachable,” Coach Eckley said. “I really have to say those three offensive lineman in Flinn, Raines and Bryant are really doing a great job leadership wise.

Filling the other guard spot on the left side will be junior Clay Doza, and he actually started two games during Jackson’s postseason run to a state title. Taking up the fifth and final spot on the offensive line will be junior Noah Gibson as he will replace Ruch, who was a two-year starter, at center.

“Offensive linemen spend enough time together that they know what the other one is thinking,” Coach Eckley said. “What I’m really happy about with this group is that every day I can say they play hard. When the ball is snapped on Friday night, they will try to impose their will on guys. They will try to play as physical as they possibly can, and I’m excited about that because they’re great competitors.”

All of this experience coming back on the offensive line will be crucial for first-year starting quarterback and senior Cameron Marchi, who served as Cael Welker’s backup the past two seasons.

Marchi actually has one career start heading into this fall since he filled in for Welker when the three-time all-state quarterback had to serve a one-game suspension last season against Sikeston in Week 5. Marchi completed seven of his 10 passing attempts for 145 yards and two touchdowns in a 71-0 win.

Coach Eckley said his expectations for Marchi are high because he believes that Cameron can be a great quarterback in his system because of how well he can throw and run the football. The key for Marchi this season will be limiting his turnovers because one thing that Eckley notices about first-year starting quarterbacks is that they turn the ball over quite a bit.

Last fall, Welker had zero turnovers and became the first-ever starting quarterback in Jackson history to go an entire season without throwing an interception.

“People will be like, ‘Well, he’s a senior,’ and it’s like, ‘Yeah, but it’s his first year starting,’” Eckley said. “You learn whether or not you can fit the ball in and take that chance by turning it over. He doesn’t have those reps of turning it over to know not to do it, so it has to be a really short learning curve for him.”

Another component that will help Marchi succeed this season will be an offensive weapon like Turley at slot receiver, who has led Jackson’s receiving corps the last two seasons with a combined 110 catches, 1,963 receiving yards and 33 touchdown grabs. What Coach Eckley likes the most about how Turley has developed is that he’s been able to be more relaxed at the position while playing faster after having to step up to varsity as a sophomore.

The Indians will have to replace their three other starters at wide receiver from last season as junior Isaiah Davis looks to fill the opposite slot position of Turley. Davis didn’t manage to catch a touchdown pass last year, but he did average 9.9 yards per catch on 16 grabs for 158 yards.

Replacing Liley at tight end will be senior Matthew Clippard, which is a significant position because most high school teams don’t use a tight end on offense. Liley made it too impactful of a role for Coach Eckley to no longer implement the position as Rhet finished as the second-leading receiver behind Liley the past two years by making 75 receptions for 1,164 yards and 14 scores.

The last but certainly not least important position in Jackson’s offense — running back — will be taken over by none other than junior Tony Williams. He served as the No. 2 back behind two-time all-stater Dickerson last fall, and he thrived in the role by rushing for 746 yards and 12 touchdowns on 113 carries.

Williams will serve as the Indians primary running back as sophomore Jason Goodman will complement him in the backfield. Coach Eckley said Goodman will remind Jackson fans of former all-state running back Seth Waters, who recorded 1,640 all-purpose yards and scored 18 times on 231 touches in 2019.

Moving to the defensive side of the ball, Norman and McDowell’s presence at inside linebacker will be greatly missed but not by opposing offenses and especially Jackson’s offense during practice.

“It’s like we’ve been playing with 13 guys instead of 11 on defense,” Coach Eckley said. “[Norman] was so frustrating at practice — you wouldn’t ever really hear him talk at all, but whatever play we ran he was at the ball at the line of scrimmage. [Our offense] couldn’t really gain confidence until game time.”

Last fall, Norman and McDowell combined for 326 tackles, 53 tackles for a loss, 13 sacks, recorded nine turnovers and each scored a touchdown. They were also the only two Indians with at least 100 stops and 20 tackles behind the line of scrimmage.

Replacing the current Redhawks will be senior Jacob Farrow and junior Griffin Horman, who each saw plenty of time on defense last fall. Both Farrow and Horman each came up with at least 23 tackles and two in the backfield as Horman even recorded one sack while subbing in.

At outside linebacker, the Indians return senior Ryley Styer as a starter from last season. Styer finished fourth on the team in tackles for a loss with 15 on top of his total 56 stops. He also recorded the third-most quarterback rushes with 10 while coming up with two sacks, four forced fumbles, two interceptions and three blocked kicks.

Playing the other outside linebacker position will be sophomore Fisher Stevens, who Coach Eckley described as a thumper and had a great offseason.

Not only does Guilliams return as Jackson’s only all-state selection from last season, but the safety also returns as the Indians leader in tackles (58) and was second on the unit in interceptions (four) and points (12). He will continue to serve as the Indians punt returner.

Jackson’s next returning leading tackler from one season ago is junior defensive end Tony Terry, who finished with 57 stops, 11 tackles for a loss, two sacks, nine pass deflections and four blocked kicks in 2020. On top of that, Terry recorded the most points scored out of any defender with 14.

“He’s made a huge jump in the offseason with his football IQ, and I look for him to have a really outstanding year,” Eckley said. “He has a really special skill set when you’re talking about a kid who’s 6-foot-3 and 245 pounds, who has good strength, good pop, a good vertical jump and then he’s fast.

“He’s probably more explosive than he is fast, and when I see him at practice or in camp when he goes somewhere, he goes somewhere. It’s pretty tough to slow him down. I think he’s going to be a tough matchup for anyone to deal with because when he decides he wants to cross the face of the offensive tackle and go into the gap, he’s quick enough to go.

“Then you can’t get him off his path — you can’t flatten him. He’s just really tough to deal with, and I’m excited for him. I’m hoping that he’s able to be a little bit healthier than he was last year with that sprained ankle.”

Jackson’s leader in interceptions from last season is coming back for his final season with the Indians, which is senior cornerback Blake Blackman. Blackman, who picked up an offer from Missouri Baptist this offseason, made five interceptions one year ago along with three pass deflections and 37 total tackles.

Lining up opposite of Blackman at the other cornerback spot will be senior Joshua Wehrenberg, who played limited time on defense last season and recorded eight tackles and deflected one pass.

Playing in the defensive backfield with Guilliams at safety is sophomore Gavin Guilliams, who also saw ample time on defense last fall in substitution. He wracked up 15 tackles and two tackles for a loss.