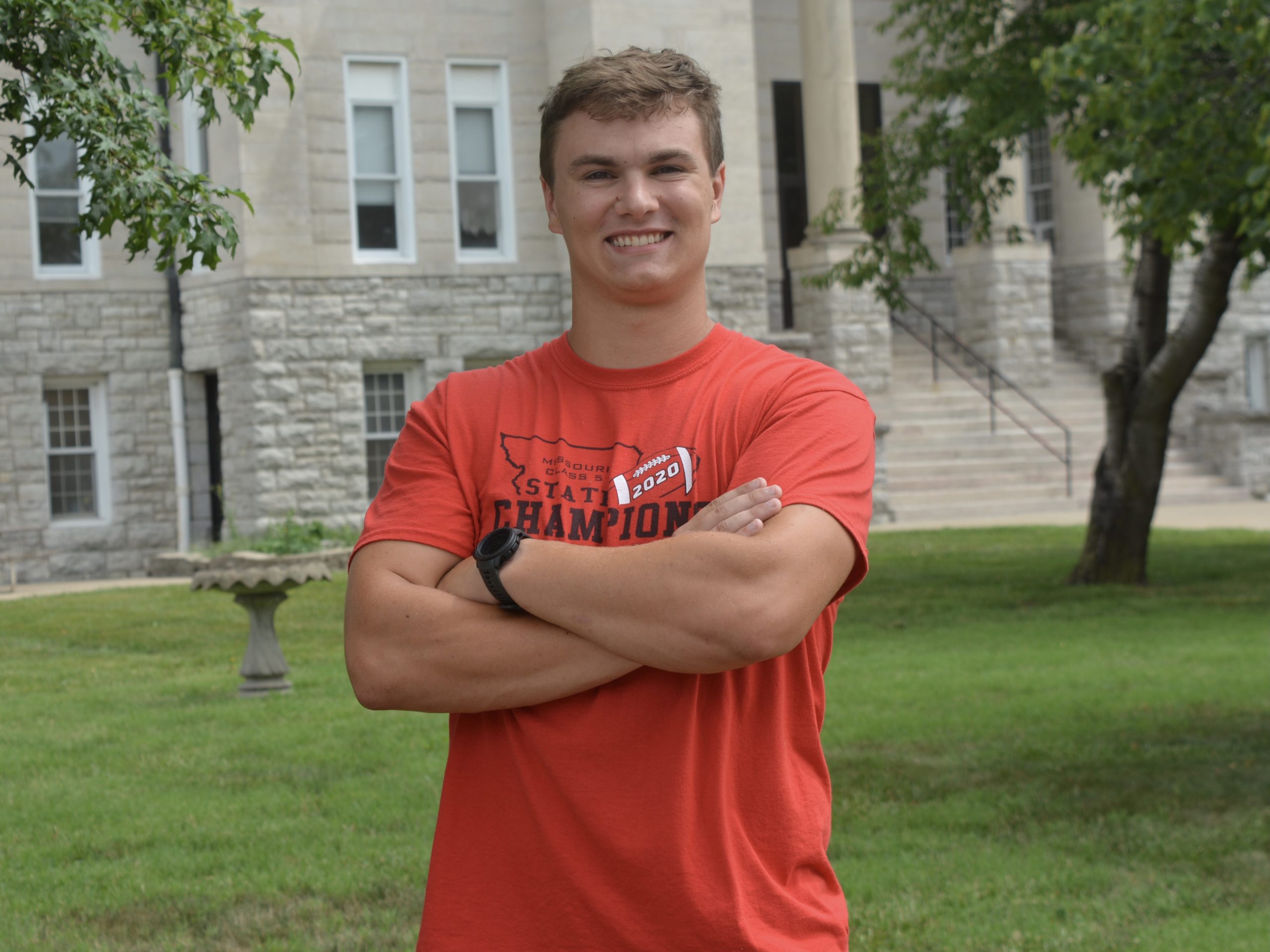 Jackson's Rhet Liley was named The Cash-Book Journal Male Athlete of the Year for the 2020-21 school year. Photo by Jay Forness

When looking back at his senior year at Jackson, 2021 graduate Rhet Liley agreed that it was a “picture perfect” ending to his career as an Indian. Not only did Liley earn an all-state medal as a javelin thrower for the track and field team this spring, but he helped lead Jackson’s football team to win its first-ever state championship in the fall.

This type of campaign has officially earned Rhet the title of The Cash-Book Journal’s 2021 Male Athlete of the Year as he was also an all-state tight end on the gridiron on top of earning all-state honors in track.

Liley was a three-sport athlete for the Indians as he also played for Jackson’s boys basketball team along with being on the football and track teams.

“It means a lot to be recognized,” Liley said. “I work really hard with all three sports. I just couldn’t give up one, so I did all three, and I think it means a lot when an athlete is able to do that.

“Many of my friends have been able to do that, so I just thought it was the coolest thing and that I’d try to do it. It worked out really well in fact, and I’ll be playing multiple sports in college.”

Rhet signed to continue his athletic career with Missouri S&T, where he will indeed continue to play multiple sports: football and track and field as a javelin thrower.

Liley earned all-state honors as a member of Jackson’s football team in 2019, where he helped the Indians reach the Class 5 State Championship game. He was unable to have a junior season of track and field due to the coronavirus pandemic, which forced MSHSAA to cancel spring sports last year.

During the time he wasn’t able to showcase his skills as a thrower his junior year — a key season for college recruitment — he wasted no time by working on his craft as much as possible. On top of that, Liley spent a lot of his time reaching out to college coaches personally and sending videos of himself throwing, which were recorded by his mother, Katy.

Another obstacle Liley had to overcome during his high school career as a javelin thrower is that Jackson doesn’t have a coach specifically for that event.

“I would say coach Derek Sievers and my mom were my javelin coaches,” Rhet laughed. “They worked with me really well and it was frustrating not having a junior year. … I was practicing on my own, so YouTube was also my best friend.

“It felt really incredible to get to where I was this year because reaching that 180 distance — I felt so relieved and like I was really taking off to my next step.”

YouTube was a helpful tool for Liley because he said there are coaches who make videos on there that understand not every school has a coach specifically for javelin.

Along with placing sixth overall at this year’s Class 5 State Championship Meet in track, Liley also took home the individual SEMO Conference, Class 5 District 1 and Class 5 Sectional 1 championships. Even though he was seeded first in each event except for state, Liley’s goal wasn’t to win each time.

“I wanted to get back to that 180 distance, so in districts I had a good lead — I was safe,” Liley recalled. “… Like in football, I was trying to better myself heading into state to where I could hit that throw. I didn’t get it at state, but all-state is really hard to argue with.”

One of Liley’s proudest moments as a javelin thrower came when he finally figured out how to hit a block, which is the part of the throw where one stops themselves completely during a full sprint. Rhet said it took him four years to finally accomplish this, and he said he almost started crying because of the pure relief he felt.

“I was by myself on the track trying to figure it out, and when I was driving home after I called my mom and was like, “Mom! I figured it out,’” Liley recalled. “I was about to start getting emotional because it took so long. A couple weeks before that, I was talking to her about how frustrated I was. It was just an incredible feeling.”

Moving on to football, Jackson finished with a perfect 14-0 record and won every single game by at least 24 points. All but one of the Indians games ended with a running clock, including the state championship game, which Jackson won handedly over Platte County, 42-7.

The prior season, the Indians reached the state title game with a 13-0 record but fell to Carthage, 27-21, in overtime to finish as the Class 5 runner-ups. Liley and Jackson also lost to the eventual state champions his sophomore campaign Vianney, 69-28, in the quarterfinals.

“The team worked really well together and the guys just knew how to keep each other in it,” Liley said. “We knew how to really help each other in our own personal and unique ways. It was really incredible how the timing worked out with that.

“It felt good to win each game by so much because at that point it’s more personal. ‘How did I play this game? How can I improve for the next game, so I can be better for the next step?’”

What Liley felt like he improved on the most during the course of the season was being the best leader possible. He said the football team really accepted and bought-in to Rhet as their leader. “If I was going to have that blessing from God, I better try and use it,” Liley said.

On top of being one of the team’s leaders, Liley finished as Jackson’s second-leading receiver with 32 catches, 527 yards and nine touchdowns. Overall, Rhet hauled in 114 passes for 1,654 yards and 18 touchdowns over his three years playing varsity. Jackson suffered two losses in that span with 38 wins while coming away with three conference and three district titles.

“When you first try and play in Jackson’s offense, it’s humbling because you have no idea what’s going on,” Liley laughed. “When you really understand it, you get that key component of, ‘This is not my job. My job is to get this guy open,’ or ‘It’s my job to catch this, or I let my team down.’

“It really helps you put in perspective of what you need to get done and the importance of it. That atmosphere and demand of perfection not only from Brent Eckley but all of the coaches. You’d then demand perfection from all of your teammates because everything had to work.”

Now that Liley has had time to reflect on being a state champion, he said it’s simply incredible. Rhet also said he feels blessed because Jackson played the most games out of any team in the state.

Even though Liley doesn’t consider himself to be the best basketball player, he used his leadership skills to help unite a Jackson squad that is on the rise with talents like seniors Nick Wasilewski, Quinn Scott and junior Clayton Ernst.

When asked what his favorite part of high school sports was, Rhet said he enjoyed how a team can feel like a family.