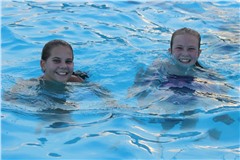 Last week during the Jackson cross country program’s final week of open camp, athletes were able to cool off in the pool during Tuesday and Thursday’s evening sessions.

This does not mean the runners were getting a break from working out.

Head coach Andrea Talley learned about pool workouts from training as collegiate runner. She believes the workouts are vital for a cross country runner’s development in strength and endurance.

Since it was an open camp, pool training was helpful for newer runners because it does not have the same impact that running does.

Pool workouts also help with daily recovery from speed workouts and shin splints, which is a regular occurrence for runners.

With Coach Talley having her runners do this type of training, it is something athletes can do on their on whether they are on vacation or are wanting to workout while beating the heat.

Coach Talley explained these two open camps are an extension of the entire preseason program she has set for participating runners.

The first camp of the offseason began two weeks after the track and field season concluded, and workouts for camp are based on each runner’s individual age.

Beginning runners start out walking and jogging for 20 to 30 minutes while gradually increasing speed to reduce walking time.

Coach Talley said it is a process that takes time, so it is important for runners to start training in the summer.

“Our cross country program has runners from the very beginner [level] all the way up to advanced where they come in running several miles a day,” Coach Talley said. “We stress that if a runner can stick with the program over a few years [from junior high to high school], they will see improvement each year.”

The process for a new runner is walking and jogging for 20 to 30 minutes. In that time, the runner alternates between jogging for one minute and then walking for two minutes.

After one week, the runner will then decrease the time they walk in the 20 to 30-minute time span by one minute while still jogging for one as well.

The next week is extended to two minutes of jogging and 30 seconds of walking.

This workout will become five minutes of running with one to two minutes of walking in intervals for 30 minutes.

Coach Talley emphasizes the importance of starting training early in the offseason to her runners by providing examples of how runners in the program have grown from these workouts.

“During the summer, I always tell runners that I can remember new runners coming to summer preseason, and they could only walk/jog once around the high school, and they made it all the way to state a few years later,” Coach Talley said. “Sometimes it’s hard to see the light at the end of the tunnel, or the success at the end of a long road of training, but seeing the kids improve their times each year and throughout the season — it’s a fun, exciting and rewarding to witness.”

There is also more than just running and swimming that went into these camps as topics such as endurance training and other distance running topics were discussed.

“We will end up covering hydration, safety, strengthening exercises and core workouts and sports nutrition,” Coach Talley said. “What to look for in running shoes, injury prevention, proper warm-ups, goal setting… It is a lot of prep time, but it is definitely worth it because the runners who truly want to improve and become successful runners will listen closely and soak in all of the information presented.”

Participants were also given a total of 24 handouts covering the camp and training schedules.

These handouts also included information on things such as mental toughness, how to stretch properly and dealing with injuries to help reiterate everything Coach Talley has taught them.

Coach Talley said if a student has not yet started summer training but wants to join the program, it is not too late because the process will be the same regardless for runners just starting out.

There is no contact allowed between coach and athlete in the dead period, but Coach Talley recommends each athlete to continue working out to prepare for the season.

Anyone interested in joining or learning more about Jackson’s cross country program can contact Coach Talley at (573) 275-0976.