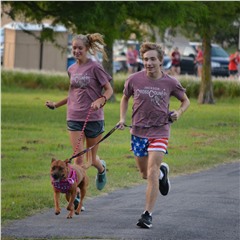 Jackson’s junior high cross country coach Jenn Lipe has volunteered
at the Humane Society of Southeast Missouri for over 15 years, and this year
she decided to have runners from Jackson help make a difference in a dog’s life
as well.

On two separate occasions last week, cross country athletes from
mainly the high school and also the junior high ran the course at Osage Park
with numerous dogs that are currently being sheltered at the Humane Society.

The idea came about after Lipe was tagged in an article on Facebook
about another cross country team doing the same thing in another state.

“[Our runners] loved it,” Lipe said. “They didn’t really look at it
as a workout — they looked at it more as a fun activity. It was a wonderful
experience to see.

“The dogs were really excited when they got there — they didn’t
really know what they were getting to do. Some of them had been in the shelter
a week or longer and didn’t get much exercise besides a morning walk, so they
were hyper and excited to be out with the other dogs.”

Each dog that was selected to participate ran anywhere from one and
a half to three miles. “[The dogs] were very thankful for water at the end,
Lipe laughed. “They were lying down in their crates on the way home.”

Even though cross country season begins in a few weeks, Lipe would
like to still incorporate some Sunday night runs with the dogs. This will also
continue in the offseason and the summer leading up to next season.

Lipe wants the runners to see this as more than just a fun
experience because it’s also a way for each of them to give back. Runners took
to social media and posted a photo of themselves with the dog they were running
with, which led to two dogs being adopted after the first run.

Any team can participate in these runs as the group is now titled
The Humane Society of Southeast Missouri’s Pack Runners.

If interested in joining the Pack Runners or adopting a pet,
contact the Humane Society of Southeast Missouri at (573) 334-5837. Ask for
Jennifer Sokolowski if you are wanting to join the pack.