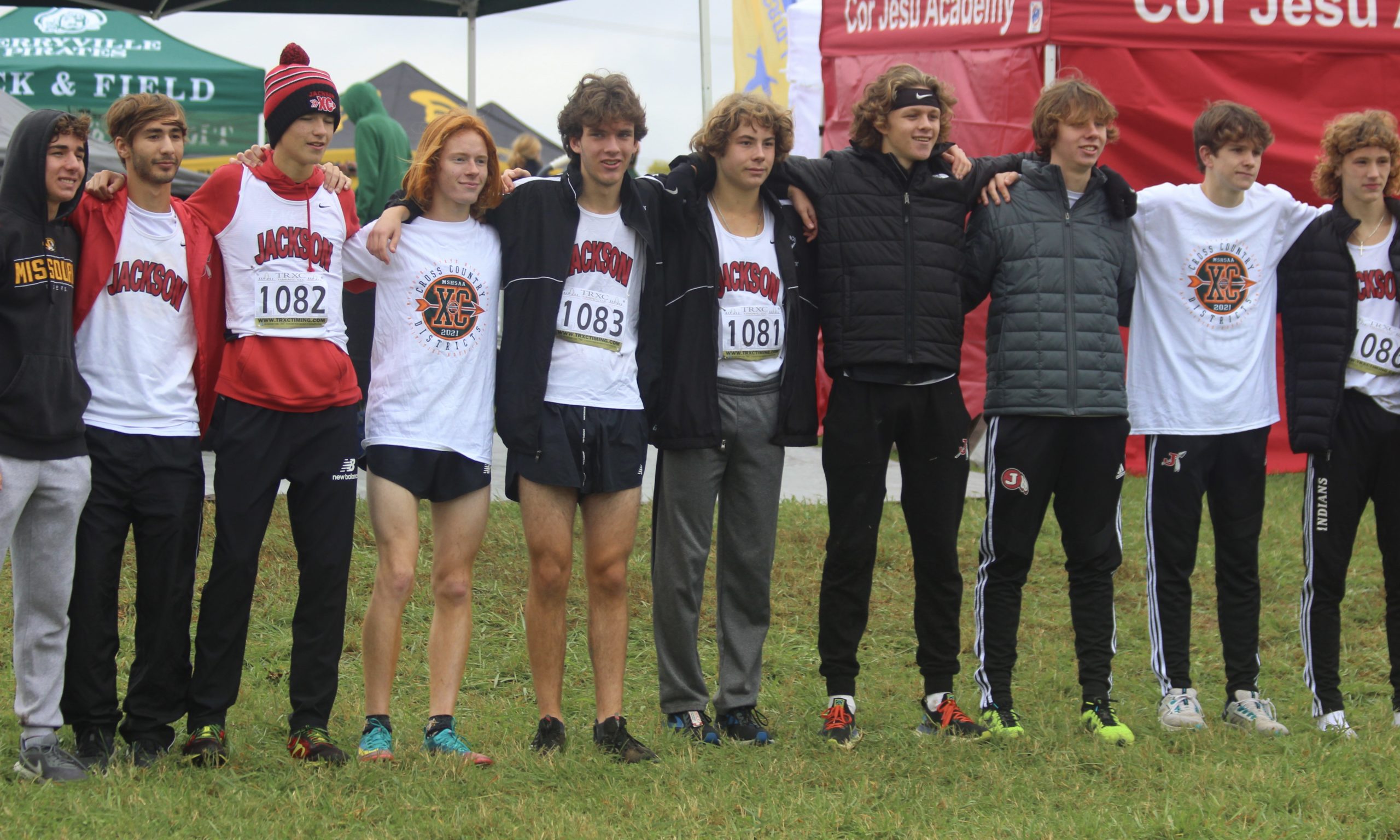 Over the weekend, the Jackson boys and girls cross country teams competed in the Class 5 District 1 Meet, which could also be classified as a sectional or “super district” since it’s made up of two districts.

Only the top four out of 18 teams automatically qualified for this weekend’s state meet as the top-30 runners qualified individually.

The Indians boys team was able to advance to state as a whole since they took fourth place with 117 points as three of their top-five runners all placed in the top 25.

“Usually districts make up between 10 to 14 teams in District 1, but this year MSHSAA made a change and combined two districts,” Jackson head coach Andrea Talley said. “… We knew it would take [times of] 16 to make the cut and usually all scorers are in the 16s, but it was all about places today. They all ran well and our four and five really kept us within reach.”

Crossing the finish line first for Jackson was sophomore Bryce Gentry as he came in 10th place with a time of 16 minutes, 45.59 seconds. Junior Hunter Wendel came in second for the Indians with an 11th-place finish at 16:51.39.

Jackson’s third runner to complete the race was junior Cole Puls, who finished 21st with a time of 17:04.69. Coach Talley said this was the smartest race she’s ever seen Puls run.

Coming in next for Jackson was junior Evan Kiefer as she took 34th overall by crossing the finish line at 17:33.37. The fifth and final runner to count towards the Indians final total was sophomore Zach Brazel, who ran a 17:41.92 to take 41st place.

Jackson’s girls team was 11 points shy of finishing in the top four with 139 to qualify for state as the Indians only had two runners place in the top 30.

“Usually in Class 5 to make it out, girls need to run in the 18s, 19s and low 20s, and we almost had that today, so it was sad,” Coach Talley said. “Sometimes you just can’t explain the weird things that happen to runners. We are all extremely proud of this team and all that they overcame today. To finish where they did was a major feat.”

Coming in first for the girls squad was senior Addie Heisserer, who took 11th place by posting a time of 19:33.09 to punch her ticket to state. The course was awfully muddy, to which Heisserer even told Coach Talley after the race, “I just about wiped out so many times.”

Jackson’s final runner to qualify for the state meet was junior Mallorie Metzger as she finished 17th overall at 19:57.46. Talley praised Metzger for running a steady, smart race.

Coming up two spots shy of qualifying for state as an individual was senior Maite Mendez as she took 32nd with a time of 20:35.43. The final two runners to count towards Jackson’s total were seniors Brooklyn Burgess and Layla Fliege, who placed 40th and 42nd with times of 20:51.37 and 20:53.68, respectively.

Usually Fliege is one of Jackson’s top-three if not first finishers, but she was unfortunately dealt with a blow towards the end of the race. Layla has been dealing with medical issues throughout this season, but that didn’t stop her from finishing the final race of her high school cross country career.

“When we saw her dropping 20 places in a very short span, we knew something was wrong,” Coach Talley said. “She gave everything she had to will herself across the finish line. As a coach, it is agonizing to see this happen. We are very proud of her. She has led this team well this year and over the past.”

This year’s Class 5 State Championship Meet will be hosted this Saturday at the Gans Creek Cross Country Course in Columbia.