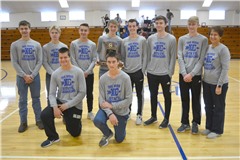 There is a first time for everything, and Oak Ridge finally now has a state championship to its name as the boys cross country team won this year’s Class 1 state title.

The Blue Jays had won the Class 1 District 2 Championship for the past four years, while placing second at state last year, seventh in 2017 and 12th in 2016.

Oak Ridge won this year’s state meet in commanding fashion with a score of 89 as the next best total by runner-up Blue Eye was 51 points behind at 140.

“[We were able to win] with a lot of hard work and dedication,” Oak Ridge’s six-year head coach Kristi Seyer said. “We lost three runners from last year’s team, so that meant some of our younger ones had to step up. They all worked very hard this season, and they pushed and pushed until they got to the top.”

The Blue Jays had their top-five runners all place 86th or higher with two members of the team garnering Class 1 All-State honors by finishing in the top 25.

Oak Ridge’s first runner to come across the finish line was none other than senior Tanner Schamburg, who took 14th place with a personal-record time of 17 minutes, 29.7 seconds. He improved his time from last year’s state meet by nearly one and a half minutes when he finished 36th overall.

Schamburg took second in this year’s district race with a time of 17:57.78 behind junior Jace Cavness of Fulton School of St. Albans’ time of 17:03.18, who also went on to win the Class 1 race.

The next all-state finisher for Oak Ridge was junior Philip Marshall with a 22nd-place finish at 17:37.1, which was also a personal record for Marshall. He finished one spot behind Schamburg in last year’s state race at 37th place with a time of 18:55.43.

Like Schamburg, Marshall also garnered all-district and all-conference honors by placing third [18:01.83] and fifth [19:21] in the respective races.

“All of our guys came and ran their hearts out — we had five out of the seven PR on Saturday,” Coach Seyer said. “Tanner has just come so far in his four years in high school cross country. He started as a kid who really didn’t know if he wanted to run or not. He has that attitude where he wants to be the best, and he’s even hoping to run in college.

“Philip is my more quiet guy — they’re not all quiet, but Philip’s more quiet. He just comes out everyday, does his thing and pulled it off on race day phenomenally. It was great.”

The next runner to finish for the Blue Jays was junior Mason Keith, who took 31st place by crossing the finish line at 17:51.2 for his personal record time. Keith came in 17 spots lower as a sophomore in last year’s state meet with a time of 19:08.13 to take 48th.

Keith helped lead Oak Ridge to also win the conference and district title with top-10 finishes. He earned all-district honors by taking fourth [18:11.36] and garnered all-conference with a 7th-place finish [19:35].

Sophomore Justin Ward was the next Blue Jay to finish the race by taking 68th place with a time of 18:43.2. In last year’s state meet, Ward finished 90th overall by crossing the finish line at 19:51.79.

Oak Ridge’s last runner to count towards the team’s final score was senior Bryce Hahs, who completed the race with a time of 19:00.4 to take 86th place.

The two runners whose score did not count towards the Blue Jays final score of 89 were sophomores Eli Sachse and Logan Dewitt. Sachse placed 106th overall at 19:27.8, while Dewitt took 158th at 21:30.

“I always tell all the kids that it takes everybody, and you run seven and they score five, but we always tell everybody it takes the whole team for this to happen,” Coach Seyer said. “Even if six and seven don’t come out to win, we may not win because they need to pass people. Everybody they pass could be points for some other team, so we always push it takes everybody.”

With Oak Ridge being a smaller school in Class 1, most of the runners in the cross country program are in more than one sport unlike bigger schools where athletes usually just run cross country and track.

This means runners for Oak Ridge are usually not spending the offseason running miles but instead playing or training for sports like baseball and basketball.

“In the summer, we kind of share them in all three sports because they’re playing summer baseball, and they have summer basketball tournaments,” Coach Seyer said. “We try to run if we can, so that offseason is a little different here than it in a lot of schools where they mainly do one sport. Our guys get that cross-training.”

Despite not being able to train for most of the offseason, the boys team still came away with three championships while the girls team won their first district title since 2010. All 14 runners recorded personal bests at districts, while five boy runners broke those PRs at state.

“[Both teams] came out to win districts, and they did,” Coach Seyer said. “To have so many of them PR again at state — I just feel like it shows they had their mind in the right place, and they had the right attitude. They wanted to show everybody what they could do.”

The top finisher for Oak Ridge’s girls team was sophomore Jiliyan Hobeck, who took 69th place with a time of 23:27.7. She earned all-district and all-conference honors this year with finishes of fifth [23:46.89] and ninth [25:28] respectively.

When asked about what it meant for her program to win Oak Ridge’s first-ever state championship, Coach Seyer started tearing up and was at a loss for words for a few moments. This was because she was reliving the emotions of that day, but she ultimately said that, “I don’t know — it’s amazing.”

Schamburg and Hahs are the only two seniors in the program since the girls had none this year, but Seyer and everyone else in the program is going to miss them dearly.

“They were our leaders — our rocks, so we’ve got some juniors coming up,” Coach Seyer said. “I’m hoping they can take over that leadership role, and we’ll see if they can do that. We’re losing two phenomenal kids that’s for sure, but we’re really excited about [the runners we have returning.]”