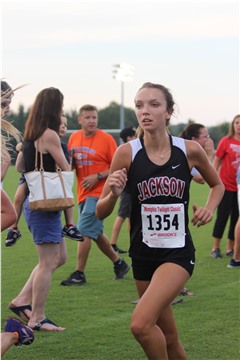 For the past two weekends, the Jackson boys and girls cross country teams have traveled to Memphis and lastly St. Louis to compete against over 200 other high schools.

First was the Brooks Memphis Twilight Classic on Sept. 2 where both teams placed in the top 20 with the girls team finishing 10th overall in the standings out of 87 schools.

Completing the course first for the girls team was junior Kennedy Bauer, who crossed the finish line in 20 minutes, 25 seconds to place 34th overall.

For the Forest Park Cross Country Festival this past Saturday on Sept. 9, Bauer’s time dropped to 21:13 for a 50th-place finish.

This was due in large part to not having a great start in the race because of how many runners were competing from a total of 131 schools, according to head coach Andrea Talley.

“Kennedy was boxed in and actually had to stop and stand as the crowd of runners made a sharp turn,” Coach Talley said. “Working your way through tight packs is a skill that has to be learned before state.”

The girls team took 20th place at Forest Park with the boys team having a top-10 placement in the standings at nine.

This was without senior Ean Buffington in the race, who was the only runner to medal for the boys team at the Memphis Twilight Classic with a 15th-place finish at 16:29.

Leading the way for the Jackson boys was senior Gage Kinder, finishing 13th overall at 17:55 to earn a medal. Kinder ran a quicker time of 17:24 at Memphis where he placed 69th.

Also medaling for the boys team was junior Scout Pettit, who took 24th in the race by crossing the finish line at 18:15.

“The main thing we gain from running meets of this size is gaining mental toughness in uncomfortable race conditions and navigating a very crowded course,” Coach Talley said. “The heat was a factor, and the runners were waiting seven to nine hours for their race, which was tough especially as the temperatures climbed to near 90 degrees.”

Heading into this Saturday on Sept. 16, each Jackson team will split up as the program is scheduled to compete in two different meets.

One is the Cape Central Invitational with a start time of 10 a.m., and the other meet is the Southern Stampede, which will be hosted at Missouri Southern State University in Joplin.