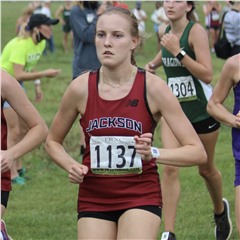 Over the weekend, the Jackson boys and girls cross country teams were both able to win the Arcadia Valley Invitational as the boys won by 30 points, while the girls took first by one.

The top-five runners for Jackson’s boys team each placed in the top 15 while three Indians were able to finish in the top five. The Jackson girls had more top-10 placers at four, but the team’s fifth runner didn’t manage to make it into the top 15.

Placing in the top five for the boys were senior Evan Stephens and sophomores Cade McCadams and Hunter Wendel. Stephens crossed the finish line first at 16 minutes, 24.27 seconds to finish second overall, which was 23.01 seconds behind Poplar Bluff senior Jaden Deaton who took first at 16:01.26.

McCadams took third place behind Stephens with an overall time of 16:25.72, which was over 15 seconds ahead of the fourth-place finisher (Windsor junior Bradley Ahrens at 16:40.80).

To take fifth overall, Jackson’s Wendel produced a time of 17:15.92 for three points as Stephens and McCadams scored a combined total of three with their top-three finishes.

The Indians final top-five runners freshman Zachary Brazel and sophomore Evan Kiefer placed 13th and 14th with times of 18:10.71 and 18:10.78, respectively. They combined for 17 points to give Jackson its final score of 23 for the first-place finish.

Farmington’s boys team placed second behind the Indians with 53 points as the Knights had two runners finish in the top 10 and two more in the top 20.

The fifth and final top-five runner for the Indians was junior Maite Mendez, who took 18th overall and scored 18 points for Jackson to be able to place one point ahead of Farmington at 39 to the Knights’ 40. Metzger placed in the top 20 by recording a time of 21:52.75, which was under two seconds ahead of the 19th-place finisher.

Even though it wasn’t counted toward the team’s final score, the Jackson girls had one more runner manage to place in the top 25 as junior Brooklyn Burgess took 24th overall at 22:23.25.

Only two runners for Jackson’s program were able to place in the top 10 as Stephens took sixth with a time of 16:06.3 and Fliege finished eighth at 20:36.9.

The girls had two more runners place in the top 25 along with Fliege as Heisserer took 10th overall with a 20:41.6 finish, while Metzger placed 22nd by crossing the finish line at 21:14.