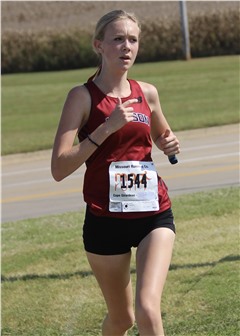 On Saturday, the Jackson boys and girls cross country teams continued their dominance by winning a second-consecutive meet — this time the Cape Central Invitational.

The boys did so in dominating fashion once again as they won their race by 51 points with a score of 22 to runner-up Northwest’s 73. The Indians top-five runners all managed to place in the top nine.

Crossing the finish line first for Jackson was senior Evan Stephens, who took second place behind Poplar Bluff senior Jaden Deaton (15 minutes, 53.88 seconds). Stephens did so with a time of 16:26.37 as sophomore Cade McCadams finished right behind him in third place at 16:26.81.

The next Indian to cross the finish line for the boys team was senior Jake Eastin, who posted a time of 17:39.64 to come in at fifth overall. Jackson’s final two top-five runners were sophomores Hunter Wendel and Cole Puls, who finished in eighth (17:46.65) and ninth place (17:51.6), respectively.

Jackson’s girls team won its second-straight meet with a score of 27, which was only one point ahead of runner-up and SEMO Conference foe Notre Dame’s 28. Much like the boys team, all of the girls top-five runners placed in the top nine to win the Cape Central Invitational.

Coming in a little under three seconds behind Fliege for a third-place finish was junior Addie Heisserer, who recorded a time of 20:46.16. Senior Elizabeth Steele was the next Indian to cross the finish line as she took sixth place at 21:31.35.

Almost 13 seconds behind Steele to take seventh place was sophomore Mallorie Metzger as she finished the race with a 21:44.32.

The fifth and final score for the Indians came from junior Maite Mendez, who took ninth with a 21:57.3. This time was two seconds ahead of 10th-place finisher and Notre Dame sophomore Molly Turner (21:59.56). Jackson’s last two runners junior Brooklyn Burgess (22:03.37) and sophomore Mara Wilson (22:39.42) each placed in the top 15.