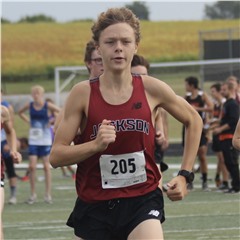 The Jackson boys and girls cross country teams competed at what will be the course for this year’s state meet at the Gans Creek Classic on Saturday in Columbia.

Over 120 schools participated in the meet and were split into three divisions as the Indians were in the gold division. The boys team finished in 14th place while the girls took 28th.

“We arrived to a muddy course, so times were slower than expected,” Jackson head coach Andrea Talley said. “This meet was a learning experience and will help tremendously in the championship phase of our season.”

The Jackson boys had a total of four runners place in the top 100 as senior Luke Wendel finished 21st overall with a time of 16 minutes, 37 seconds to medal. Also placing in the top 50 for the boys team was fellow senior Ethan Walz, who took 49th at 17:05.

The next finisher for the Indians was junior Evan Stephens, who took 81st overall with a time of 17:26. Freshman Cade McCadams finished one second behind Stephens to take 83rd place.

Fellow freshman Hunter Wendel was the next runner for Jackson to cross the finish line at 185th place with a time of 18:34.

The girls top finisher was sophomore Maite Mendez as she was the only member of the squad to place in the top 100 at 72nd (21:08). The next runner to finish for Jackson was freshman Mallorie Metzger at 132nd place with a time of 21:57.