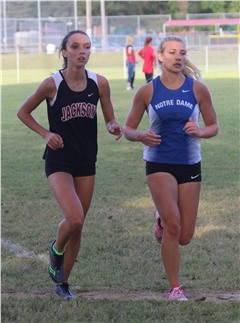 The girls team was able to win its race handedly with a score of 27, thanks to having five runners place in the top 10.
Jackson’s boys team only won by two points at 35 with Cape Notre Dame behind them at 37.

Notre Dame senior Alaina Baumgart raced with Bauer throughout the course at Jackson City Park, but Bauer was able to break away for Baumgart to place second at 20:23.

Finishing second for the Jackson girls was junior Faith Littleton, who finished the race at 21:20 to take fourth overall to earn all-conference honors for the second-straight year.

Next to finish for the Indians was junior Kaylee Wilson in sixth place with a time of 21:25 to earn all-conference.

This was only Wilson’s second meet of the season as she competed in the Saxony Lutheran Invitational on Oct. 5 where she took fifth place at 22:47 to medal.

Jackson’s fourth top-10 finisher was senior Margo Motes in seventh place, who ran a 21:26 to earn all-conference honors for the first time in her career. Motes finished 23rd with a time of 21:43 a year ago.

The final runner on the girls team to earn all-conference was senior Abby Sadler. She took ninth place by crossing the finish line at 21:32.

Winning the boys conference race for a second-straight season was senior Ean Buffington, who ran a 16:49 to finish.

Coming in second place five seconds behind him was Notre Dame sophomore Blake Morris at 16:54.

Junior Scout Pettit was able to garner all-conference honors for a consecutive year by placing fifth overall at 17:29.

The last member of the Jackson boys to earn honors was senior Gage Kinder, who was also the winner of last year’s junior varsity race.

Both of Jackson’s junior varsity teams also won each race for the second-straight year with freshman Jack McCormack winning the boys race at 18:31 and freshman Elizabeth Steele winning the girls with a time of 21:56.

“I really can’t fully explain just how important each and every runner was today,” head coach Andrea Talley said. “It was not just a handful, but everyone had to perform to their potential for us to have a chance at sweeping conference.

“It came down to the last race, the junior varsity girls race, and we had to have some girls pick off some runners. On the last loop they did it. Quite an accomplishment to have all four race individual champions and four team champions.”

Jackson’s boys and girls team will now compete in the Class 4 District 1 Championships this Saturday, which the girls team won in 2016.