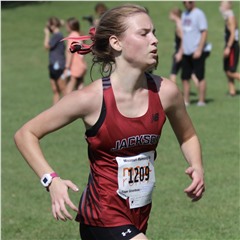 To start the 2020 season, Jackson cross country hosted its annual invitational on Aug. 29, and the Indians were able to win three races. Competitions were split up between each grade class as Jackson won the freshman boys, sophomore boys and junior girls races.

The Indians had a total of four runners win their respective race as junior Addie Heisserer and sophomore Mallorie Metzger took first for the girls while sophomore Cade McCadams and freshman Zach Brazel finished first for the boys team.

Heisserer led the junior girls team by posting a time of 16 minutes, 20.96 seconds as fellow Jackson junior Layla Fliege finished as the runner-up at 16:47.45. Also finishing in the top 10 for the Indians was Brooklyn Burgess and Maite Mendez, who finished seventh (17:51.16) and eighth (17:51.49), respectively.

Two other teams for Jackson finished as the runner-up as the freshman and sophomore girls teams took second overall.

The freshman girls team had three of their five runners finish in the top 15 as Autumn McBryde was the first Indian to cross the finish line at sixth place (15:08.66). Also finishing in the top 10 was Jenna Marks coming in at ninth (15:44.24).