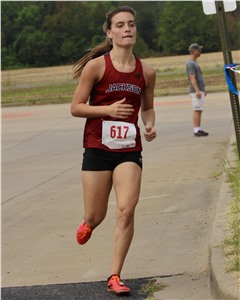 Last fall, the Jackson boys and girls cross country teams both continued their streaks as SEMO Conference Champions while sending a combined total of four runners to the Class 4 State Championship Meet.

Three of those state-qualifying runners are returning this season as senior Evan Stephens and sophomore Cade McCadams will be back for the boys while junior Layla Fliege will continue leading the girls team.

“They are a year older and another year more experienced hopefully by the time they get down to the state meet,” Jackson head coach Andrea Talley said. “After the first week of practice, they look stronger than they were a year ago.”

Fliege has competed in the state meet every year of her high school career as Jackson’s girls team advanced back in 2018 with former 2016 state champions and 2019 graduates Kennedy Bauer, Kaylee Wilson and Faith Littleton.

Also competing at state in 2018 and returning to this year’s girls team includes junior Maite Mendez and seniors Elizabeth Steele and Sophie McCadams. Mendez and Steele became two-time all-conference medalists with Fliege last season, while Fliege and Mendez also placed in the top 20 at the district meet.

Another returning runner for the girls is none other than sophomore Mallorie Metzger, who took fifth overall in last year’s SEMO Conference race to earn all-conference. Metzger was also the top finisher for the girls team in the district race by taking 13th.

“Mallorie is now learning more about the distance,” Coach Talley said. “She was more of an 800 runner, and I think junior high cross country being shorter was easy to figure out. Last year, I think it took her a year to figure out the pacing. … We’re going to see a big jump in improvement because she understands that pacing.”

Metzger’s freshman campaign came to an end in the sectional meet as she was unable to place in the top 30 (qualification for state) and took 41st place, which was fourth overall for Jackson.

Placing ahead of Metzger and other returning runners for Jackson this season are fellow sophomore Sadie Middleton and junior Addie Heisserer, who took 34th and 36th at sectionals, respectively. Heisserer also earned all-conference honors by placing 10th in the SEMO girls race last year.

“Last year we were so young and kind of timid, which is how young, inexperienced runners tend to race,” Talley said. “High school cross country is fast paced. It’s not a fitness pace or breathing type of event, it is something that the kids have to learn to fight through discomfort wise.

“Once they learn how to keep the confidence through the pain, they achieve fast times. Our girls team has the ability to go on to the state level, but it will take each runner on the team having done their part over the summer months.”

Filling out the boys team along with Stephens and McCadams will be Indians like seniors Jake Eastin and Clayton Greenlee and sophomores Hunter Wendel and Cole Puls.

The second Indian to cross the finish line for Jackson was Stephens as he took 20th overall as McCadams finished 10 spots behind him at 30 for them both to punch their ticket to state.

“The focus that these runners have had to maintain is incredible,” Coach Talley said. “Those that kept running through spring and summer are the backbone of the team, and people may not realize the resilience and dedication it took to not just take two weeks off. They have high goals and want that state birth pretty bad.”

The fellow Jackson runner Stephens finished behind was 2020 graduate Luke Wendel, who finished in the top five at fourth place to garner all-sectional honors. Wendel was also a two-time all-district and all-conference medalist.

All of Jackson’s returning runners were unable to have a season of track and field last school year due to the coronavirus pandemic canceling all spring sports.

“Not having track did affect them in a lot of ways both mental and physical,” Talley said. “The track helps the cross country and cross country helps track. This year we had this five-month block, and some kind of kept going and some didn’t. When they came back into it, it was a whole different feel. They were starting further back than what they normally would’ve started.”