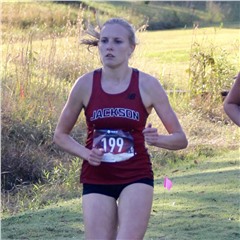 Neither the Jackson boys or girls cross country team were able to place in the top four at this year’s Class 4 Sectional 1 Meet to advance to this Saturday’s state championship meet.

However, four Indians were able to place in the top 30 of their respective race to qualify as individuals to compete at Columbia.

“It was a very much an emotional roller coaster — a tough course, but also some tough events that influenced the race results,” Jackson head coach Andrea Talley said. “This is a young crew, so the experience from the district, sectional and state meets will make this group a strong force for next fall team wise.

“I am extremely proud of how the runners handled the adverse weather and course conditions over the past two weeks. They had to be extremely tough mentally.”

The boys team had three runners do so starting with senior Luke Wendel, who took fourth overall with a time of 16 minutes, 32.92 seconds to earn all-sectional honors for the first time in his career.

Wendel was the only runner for Jackson’s boys team to qualify for state last season, where he ended up placing 91st overall (17:29.75).

The next runner to place in the top 30 for the boys team was junior Evan Stephens by crossing the finish line at 17:07.25 to place 20th overall. This will be Stephens’ first trip to state.

Coming in 10 spots behind Stephens for the Indians was freshman Cade McCadams to take 30th with a time of 17:18.65.

The lone runner to place in the top 30 for the Jackson girls team was sophomore Layla Fliege as she took 11th place by crossing the finish line at 20:33.9. This finish earned Fliege all-sectional honors for the first time.

Jackson’s next top finisher at sectionals was freshman Sadie Middleton in 34th place with a time of 21:17.46. She was paced by sophomore Addie Heisserer at 36th place (21:20.17).

The Indians next runner to finish the race was freshman Mallorie Metzger by coming in at 41st place with a posted time of 21:31.03.