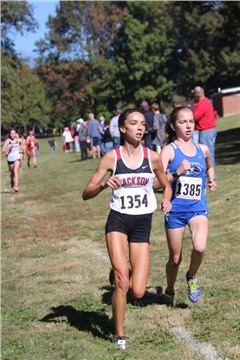 The Jackson cross country program’s season officially got underway Saturday morning when it hosted its annual invitational in the Jackson City Park.

Both boys and girls team did not run together, though, as the races were split up by grade and not varsity or junior varsity.

One grade from each team took first overall with the junior girls led by all-conference runner Kennedy Bauer [second place; 15 minutes, 19 seconds] and the freshmen boys, which ended the day with five medalists, accomplishing the feat.

Bauer was joined by fellow all-conference runner Faith Littleton, who took seventh place with a time of 16:01 to medal, and Payton Beussink. Beussink was two places away from medaling in her first meet of 2017 with a run time of 20 minutes flat.

Two freshmen placed in the top five for Jackson allowing for the team to take first as Evan Stephens finished third with a time of 11:26 and Jack McCormack behind in fourth at 11:30.

Three racing groups for Jackson took second, which were the boys upperclassmen, senior and junior teams, and the senior girls.

Two members of the senior boys team took the top three as Ean Buffington finished the race second overall, crossing the line at the 12:36 mark. Fellow senior Gage Kinder was third overall, but crossed the finish line 23 seconds after Buffington did at 12:59.

For the junior boys, it was Landon Carlton finishing first at sixth place with a time of 13:08, and completing the race 18 seconds after him was Scout Pettit at 13:26 to take 10th overall. Gavin Jones was the final junior for the boys to medal as he took 13th overall at 13:50.

Each of the three senior runners for Jackson finished as medalist in their race with Julia Kidwell, who took off over two minutes from her time a year ago, finishing third with a time of 15:22.

Margo Motes and Abby Sadler took 12 and 13th place respectively, but Motes was able to finish 30 seconds ahead of Sadler, crossing the finish line at 16:24.

“For our first competition, we were pleased,” head coach Andrea Talley said. “All runners were to run relaxed, and they did that. Now we build for the Memphis Twilight meet on Saturday.”

Runners will now compete on either varsity or junior varsity. The girls took ninth place at Memphis while the boys finished 18th last year.