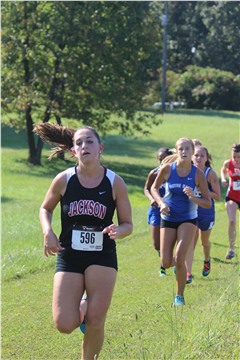 Jackson and Cape Notre Dame were the only two schools from Missouri to compete in the meet, and each girls team placed in the top three.

The Indians won the invitational as four of their runners finished in the top 20 to medal with junior Kennedy Bauer and senior Margo Motes placing in the top 10.

Bauer took fourth place, crossing the finish line at 20 minutes, 56 seconds as Motes placed the highest she has all season at eighth with a time of 21:32.

Also finishing in the top 20 to medal was senior Abby Sadler, who crossed the line at 21:54 for 17th place, and freshman Sophie McCadams with a 19th-place finish at 22:00.

Freshman Elizabeth Steele was one place away from medaling at 26th as she recorded a finish of 22:45, five seconds behind the 25th-place finisher.

Senior Claire Morrill (18th place) and junior Kennedy McGhee (20th) were the final two Bulldogs to medal with times of 21:56 and 22:10 respectively.

Notre Dame’s boys team finished seventh overall with Jackson behind them in 11th place without senior Ean Buffington on the course.

The lone medalist for Jackson’s boys team was junior Scout Pettit, who took 22nd overall with a time of 18:05.

Finishing behind Pettit in the top 50 for Jackson was sophomore Luke Wendel in 44th place, who finished the race in 19 minutes flat.

“In this meet, all runners ran in one race — all girls and an all varsity boys race,” head coach Andrea Talley said. “The temps were again high this weekend, which didn’t provide fast race conditions.”