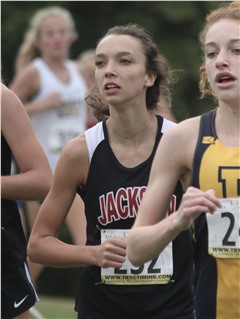 On Saturday, the Indians took third place out of 20 teams in the Capital City Challenge in Jefferson City as five runners finished in the top 50.

Jackson scored a total of 112 points to take third as Eureka took first place with 86 and Liberty North second at 98.

The top finisher for the Jackson girls was senior Kennedy Bauer in ninth place with a time of 20 minutes, 1.01 seconds. Only four spots behind Bauer was fellow senior Kaylee Wilson, who took 13th overall with a 20:24.4 finish.

Freshman Layla Fliege was the third finisher for the Indians, taking 23rd place as she crossed the finish line at 20:42.51.

Coming in fourth was senior Faith Littleton by coming in at 31st place with a time of 21:09.05.

Another freshman finished in the top 50 for Jackson as freshman Maite Mendez took 46th place by crossing the finish line at 21:32.85.

The next two runners to account for the Indians total points finished in the top 70. First was sophomore Elizabeth Steele with a time of 21:41.4 for 51st place.

The final runner for the Jackson girls to account towards the point total was another freshman in Addie Heisserer, who crossed the finish line at 22:20.37 to take 70th overall.

The boys team did not have the same success as it finished 13th overall with 321 points as no runner managed to break the top 50.

However, four runners for the boys did finish in the top 65 starting with junior Luke Wendel. He took 52nd place with a time of 17:36.23 as sophomore Evan Stephens paced him at 17:42.76 to finish 55th overall.

Senior Scout Pettit finished five spots after Stephens in 60th place, finishing the race at 17:49.67. Junior Ethan Walz came in four spots behind him in 64th place with a time of 17:52.49.

For the girls to win the Marshall County invite by a score of 35 to McCracken County’s 43, four runners placed in the top eight as Bauer led the way by taking third place at 19:31.64.

The next runner behind her was none other than Wilson, who took fourth place coming in at 20:19.52.

Littleton finished ahead of Fliege in this race as the senior took seventh overall with a time of 20:52.95. Fliege wasn’t far back as she came in under three seconds behind Littleton at 20:55.55 to take eighth place.

The final runner to account for points was Heisserer with a 34th-place finish (22:35.2).