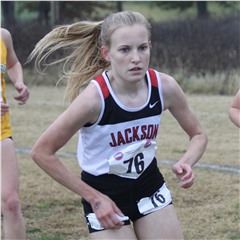 The Jackson cross country program is coming off a 2018 campaign
where its girls team placed in the top 10 of the Class 4 State Meet for the
second time in three years.

These runners have now graduated as Bauer even signed with the
University of Missouri – Kansas City to continue her cross country/track and
field career.

The boys team only had one runner advance to last year’s state
meet, which is returning senior Luke Wendel. He also picked up Class 4 District
1 honors by placing eighth overall and SEMO North All-Conference honors with a
fourth-place finish.

Wendel placed 91st overall in his first ever state race last season
with a time of 17 minutes, 29.75 seconds.

“We are extremely young this year not only in actual ages of the
runners, but also in years run and also in the miles they have put in,” Jackson
head coach Andrea Talley said. “We lost several varsity seniors last year to
graduation. In a few years, this group will be a force, but only time will tell
as far as how far they can go this year.”

Jackson’s girls team returns three all-conference medalists from
2018 in junior Elizabeth Steele (fifth place) and sophomores Layla Fliege
(sixth) and Maite Mendez (eighth). All three of these runners helped the
Indians take ninth overall at state as Fliege placed fourth in 116th place for
Jackson. Fliege posted a time of 21:21.49 to do so, while Mendez finished
behind her at 132nd place (21:36.44) followed by Steele at 143 (21:48.27).

Returning junior Sophie McCadams was the final finished for
Jackson’s girls team at state last year by taking 154th place at 22:11.54. Junior Addie Heisserer also competed on
varsity last season for Jackson, but she was unable to compete at state due to
an injury.

Both Walz and Stephens are coming off strong seasons with the track
and field team, while Coach Talley said Stephens is much improved heading into
this cross country season and can handle faster paces in the same workouts he
did last fall.

Other varsity runners for Jackson this season include senior Jeremy
Brown along with juniors Clayton Greenlee and Jake Eastin. Greenlee and Eastin
each had successful seasons with the track team in the spring.

“Greenlee is a much improved runner as his summer base has steadily
increased,” Coach Talley said. “With [personal records] in all of Eastin’s
events in track, he should improve dramatically this year. Brown is looking for
his best season as a senior.”

Major focuses for the teams this offseason have been to bring
everyone to a mileage level that will prevent injuries and allow each runner to
reach a competitive level this season.

“There were the usual open gyms and contact days, strength training
and team camps throughout the summer,” Coach Talley said. “Many of the runners
were out of town for the summer, so we are working toward their start of summer
training levels over the next eight to 10 weeks.”

Coach Talley stated in the past her and the rest of the staff could
get accurate reads on where there times were at in the Fourth of July race
results, but several were not in town. Talley said summer training logs
provided by her athletes have just been coming in, so she will have a better
feel for what everyone can handle.

“It will be a learning year and a growth year in many ways,” Talley
said. “We will be looking at their summer miles, the workouts, hill runs, their
strength training on open gym nights and how they worked together as a team
over the summer months.”

Coach Talley has also decided to do something new this year by
starting a leadership program for her teams, which she expects will improve her
runners mentally and physically.

The boys and girls team both came away with conference
championships for the fifth and fourth-straight time respectively. Talley
expects for each team to repeat as conference champions this year, while also
coming away with a district championship.

Jackson starts the season this Saturday with its very own
invitational at the City Park.