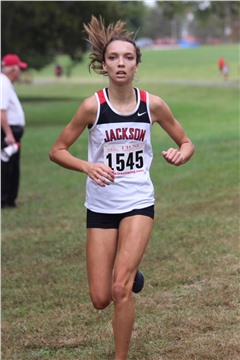 The Jackson boys and girls cross country teams were able to compete at home in this year’s Class 4 District 1 Championship Meet, but both came away short in winning a title.

The girls team that won districts last year placed second in this year’s meet, finishing behind Lindbergh, which had five runners place in the top 20 including first.

Jackson was able to finish with more all-district runners at three with junior Kennedy Bauer finishing first for the Indians and taking second place at 20 minutes, 1 second.

This is Bauer’s second-straight year earning all-district honors as she took fourth in last year’s race with a time of 20:06.

Claiming all-district honors for a second year in a row as well was fellow junior Faith Littleton, who took ninth place in 2016, crossing the finish line at 20:21. She finished sixth overall this year with a time of 20:27.

Earning all-district for the first time in her high school career was senior Margo Motes. She was the eighth-place finisher at 20:36 to be the third and final runner to finish in the top 10 for Jackson.

Two more runners finished in the top 30 for the Indians to qualify for sectionals as an individual. Those runners were freshman Sophie McAdams and 2016 all-state honoree junior Kaylee Wilson.

Wilson has just only returned to action as this is the third meet she has competed in all season thus far. She earned all-conference honors  two weeks ago by placing sixth overall with a 21:25 finish.

For the second-straight year, the boys team took fourth overall to qualify for sectionals.

The Indians were led by senior Ean Buffington, who once again took second place in the race, this year with a time of 16:32.

Buffington was the only runner for the boys team to earn all-district honors, but senior Gage Kinder and freshman Jack McCormack finished in the top 30 to qualify as individuals.

McCormack finished 21 seconds behind him at 17:53 to place 30th overall, and junior Scout Pettit was only one second behind McCormack to finish 32nd.

Each boys runner for Jackson placed in the top 40 while the girls team only had one runner out of the mark in 56th place.

Next for each team is the Class 4 Sectional 1 Championship Meet where the girls placed second and boys took eighth.

The girls team was able to qualify for state and went on to win its first in school history, but Buffington was the only member of the boys team to compete in Jefferson City.

Wilson earned all-sectional honors in last year’s race with a time of 20:40. Bauer was able to medal in the meet with a 24th-place finish at 21:04.

This year’s sectional meet will be held at Parkway Central High School in St. Louis as the girls race begins at 9 a.m. with the boys starting after at 9:30.

Head coach Andrea Talley would like to thank all of the parents and the rest of the cross country runners that helped at the district meet.