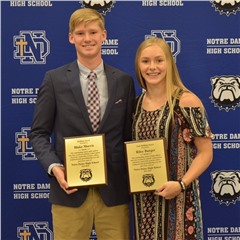 Cape Notre Dame 2020 graduate Blake Morris finished his career as a Bulldog with many accolades such as being a four-time all-state runner in cross country (three) and track and field (one). Morris was also named the recipient of this year’s Bulldog Award, which is voted on by all of the coaches at Notre Dame.

“It’s an amazing feeling [to win the Bulldog Award],” Morris said. “There’s so many talented guys in this school who work super hard, so being able to win this is really, really special.”

The Lady Bulldog Award winner was fellow 2020 graduate Riley Burger, who was selected to the All-CBJ Team and named one of this year’s two CBJ Athletes of the Year. Both Burger and Morris will continue their athletic careers at the Division-I level as Blake signed with Mizzou while Riley inked with Louisville.

Morris will continue to run both cross country as well as now indoor and outdoor track and field in college. Since Mizzou joined the Southeastern Conference (SEC) in 2012, the Tigers have placed in the top five of the cross country championship on the men’s side four times.

Morris is excited to see what he can accomplish in his career with Mizzou as he’s witnessed plenty of runners have success there.

“The SEC is one of the best conferences out there,” Morris said. “There’s so many talented athletes in it, so I’m really excited for that competition and to see all of the good athletes and compete against them.”

As a member of Notre Dame’s cross country team, Morris qualified for the Class 3 State Championship Meet all four years by finishing eighth overall as a sophomore, was the runner-up in 2018 and lastly placed seventh this past fall. Morris holds the school record in the boys 5,000-meter cross country run with a time of 15 minutes, 26.1 seconds.

“I made so many memories [at Notre Dame] and not even just the racing, but with the team on the bus rides, the card parties and just the practices in general,” Morris said. “We had so many good times that no matter the outcome of the race that day, that’s what I’ll remember the most.”

Morris’ athletic career began at an early age since both of his parents were runners, so whenever they worked out, Blake would join them. “I’d just run or do whatever, and I started to like it a lot. In probably like second or third grade, I started running 5Ks and was with a track team in the city.”

Morris describes distance running as a “grind” because you have to be dedicated, but he also remembers to have fun with it especially during his days at Notre Dame. What kept Morris motivated during his career was the goal to one day run collegiately.

Mizzou contacted Morris early on this fall, which led to Blake visiting the campus as well as follow up meetings and phone calls. Coaches from Mizzou also came down to Cape Girardeau to visit Morris at home.

On the rare occasions that Morris isn’t running or training for the Tigers, he will be focusing on becoming a businessman like his father, who is the general manager at Toyota. Morris has already gotten a head start by working with his father and seeing the day-to-day operations.